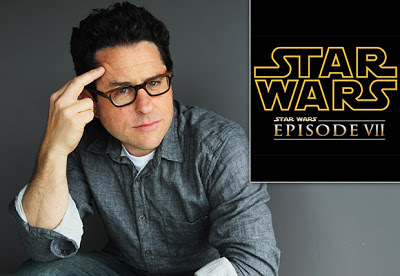 J.J. Abrams is officially making the Trek from the final frontier to a galaxy far far away.  The man who revived the Star Trek franchise has been ask to do the same for the biggest film franchise in this galaxy, as the director of Star Wars Episode 7 which is slated to hit theaters Summer 2015.


When Disney first bought the Star Wars franchise from George Lucas last year, J.J. Abrams seemed more than happy to stay aboard the enterprise, taking to twitter to dis spell the rumor that he had any interest in directing Episode 7.  Apparently that was as believable as the notion that Greedo shot first!

So what changed Abrams mind besides the boat load of cash he will inevitably be making?  For one Abrams has never been shy of his love for the Star Wars franchise, much to the chagrin of Trekkie's everywhere.  The other reason may have been the endorsement of Steven Spielberg.  Rumors are the three names Disney courted hard for the gig were: Abrams, Ben Affleck,and Steven Spielberg.  Spielberg was a logical choice considering his relationship with George Lucas over the years.  Even though Spielberg turned down the job, but he kept insisting that Disney hire Abrams.

Which makes perfect sense, when you look at the incredible job Abrams did bringing the Star Trek franchise back to relevance.  Combine that with his love for the Star Wars property, and Disney has to hope that Abrams can give Star Wars fans the same type of results that Joss Whedon gave comic book fans with the Avengers last summer.  The Avengers proved that nothing works better than when you put a great director in charge of the characters they have adored since childhood.  The result is something that speaks to the hearts of fan boys everywhere!