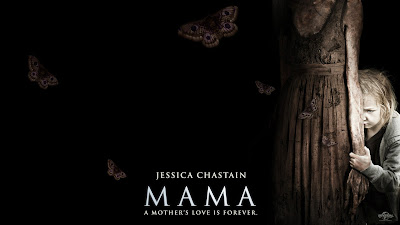 MAMA a phrase you  have been hearing echo through trailers and TV spots repeatedly the past month.  Perhaps your initial reactions were close to mine, which were: You couldn't stop imitating the word MAMA as it is said in the trailer in that eerie whisper, and if you are a film fan you may have thought to yourself Guillermo del Toro is doing a horror film how could this go wrong, even if he is only producing?

While MAMA never goes terribly wrong, it never goes entirely right either.  MAMA never feels quite scary enough, perhaps because of the PG-13 rating.  In fact the majority of MAMA's gotcha moments fail to deliver.  However Spanish director Andres Muschietti is able to keep the pacing just suspenseful enough to keep you enthralled in the story the majority of the film.  This consistency in interest is aided by a strong performance by Jessica Chastain, who is on quite a role in Hollywood as of late.

Ultimately MAMA suffers from being a tale of two halves.  A superior  first half that is very entertaining because you are just wanting to find out what is going on, and who or what MAMA is? Then a 2nd half that feels significantly less interesting once you have the answers to those questions.