The best there never was: Royal Rumble 2013 Review 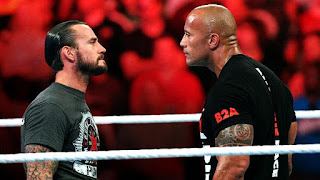 Well it's that time of the year again.  The Road to Wrestlemania has begun.  And it is already off to a lackluster start.  Last night at the Royal Rumble, The Rock defeated CM Punk for the WWE title and John Cena won the Royal Rumble match itself to set up the inevitable confrontation between the two in the main event of this year’s Wrestlemania.  Now I am opposed to this for several reasons.  First, who ever thought it was a good idea to take the WWE title off the longest reigning champion since Hulk Hogan?  Punk was the best thing going in the WWE since the Attitude Era.  When you have someone holding a title that long, does it make sense for him to drop it to someone who will not be there after Wrestlemania?  Sure, it will be cool for the Rock to parade the WWE title around the late night shows while he is promoting his latest sub-par movie, but why do this at the expense of the best thing you have put on TV since Stone Cold.  The Rock does not need the title to draw.  He could have faced John Cena at Wrestlemania and it would still have the same buy rate regardless of whether it was a title match or not.  Does anybody really think that the Rock is going to appear at every Raw between now and Wrestlemania?  Is the Rock going to be in the Elimination Chamber match?  Will the Rock appear via satellite tonight on Raw?  The WWE had the potential to put on one of the best Wrestlemania main events in recent history if they would have kept the title on Punk and have him faced The Undertaker.  I can imagine it now, the longest reigning champion in a quarter century against the guy who is 20-0 at Wrestlemania.  I’m getting goose bumps just typing it but alas, we get Rock/Cena again.  Heck, I would have rather seen Punk drop the title to Cena at Wrestlemania than lose it to the Rock last night.  At least you know Cena will be there after Mania.

Now let’s look at the Rumble match itself.  I have no problem with Cena winning the match but I was holding out hope at the end that maybe Dolph Ziggler could pull a HBK and win from the first entry spot.  I was worried there at the end that Ryback was going to win it but thankfully Vince didn’t pull the trigger on Rock/Ryback at WM.  There was not many surprise entrants as there was in years past but we did get to see Goldust and The Godfather again.  Which comes to the question, Where is Brock Lesnar?  I thought last night would have been the time to bring him back.  He could have cost the Rock the title since, like Punk, he is a “Paul Heyman guy.”  Rock/Brock at Wrestlemania would not have required them to appear at every single Raw between now and then.  But that is in the past now.  We have to look forward to Elimination Chamber and then on the Wrestlemania.

So, what happens now?  Obviously we are looking at Rock/Cena for the WWE title, but what about the World Championship?  I would be very surprised if Alberto Del Rio is champ at Wrestlemania so look for him to drop it at Elimination Chamber to either Randy Orton or Sheamus.  I wouldn’t mind seeing Orton/Sheamus for the World title at Wrestlemania.  Keep in mind, though, that Dolph Ziggler still has to cash in his Money in the Bank briefcase sometime.  Where in all this does CM Punk go?  Is he put in the WWE title match making it a triple threat match?  Does he face The Undertaker without the title?  Does the long-rumored Punk/Austin match happen?  I’ll believe that when I see it.  But it’s going to be a fun ride to Wrestlemania.  It always is.