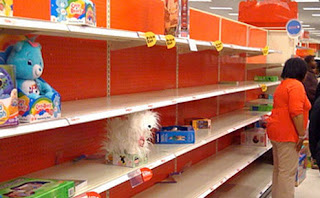 With New York Toy Fair in full swing this week, it's time to take stock of the past year for action figure collecting and to look forward to all of the little plastic men that will be offered to us over the next year.  I've already covered my top ten favorite toy lines of 2012, so here's a look at the toy lines from the past which I was really into in previous years but that didn't even register on my radar in 2012.  This isn't an attempt to bash these lines or anything, just to try and understand why they didn't take my money like in year's past.  They are listed in no particular order after the break:

In 2010 and 2011 I was absolutely in love with Hasbro's Vintage Star Wars line.  Hasbro was releasing amazing 1/18th scale figures that were not only as detailed as most figures in the 6-7 inch scale designed, but also featured brilliant vintage styled packaging.  As the line continued in late 2011, it became harder and harder to ever find any of the figures and the cost on these guys jumped past the $10 mark.  In 2012, I felt lucky to ever see one of these figures on the shelf and when I did the price generally scared me away.  This really was a bad year for Star Wars figures as I can't recall even buying one last year.  Hopefully with the prospect of new movies on the horizon Hasbro will get their head back in the game. So far, Star Wars: Black, Hasbro's new 6 inch line aimed at collectors, seems like a neat venture although I only anticipate buying certain characters.  I have hundreds of Star Wars figures already and don't feel the need to buy every character again in a larger, more expensive scale. Hasbro has mentioned a 1/18th scale Star Wars: Black line which seems to be a continuation of the Vintage styled figures, so there is some hope ahead.

Oh, G.I. Joe. What a rough year or so you have had.  2011 was amazing: We had the brilliant IDW comics, G.I. Joe Renegades was on TV, Retaliation was shaping up to look like a great followup to the disappointing Rise of Cobra, and the Pursuit of Cobra line ended with a bang and transitioned right along into the amazing 30th Anniversary line.  Then 2012 hit.  While IDW continues to put out amazing comics, there hasn't been much else to get this fan excited.  The film G.I. Joe: Retaliation was delayed from June of last year until March 2013, leaving the less than impressive first wave or two of movie tie in figures to quickly disappear from shelves. While the G.I. Joe CC has started offering their figure subscription service, I find it far to expensive for what you get on top of having to pay a membership fee before you can even begin to buy the figures.  While Hasbro has released some excellent SDCC exclusives over the past couple of years, good luck getting them. This fan, G.I. Joe being one of my most beloved entertainment properties, purchased 1 G.I. Joe figure in 2012. One.  Fortunately, Hasbro seems to be showing some nice stuff at Toy Fair. My fingers are crossed.

While I began transitioning out of being a DCUC completist when Masters of the Universe Classics hit, I was still picking up figures I wanted here and there of various Batman related characters and DC's mystical characters.  While 2012 had some good product released by Mattel, it was pretty difficult to find.  Mattel's efforts with DCUC were divided between their online Club Infinite Earths subscription service and their retail line that was to include characters that would appeal to a wider audience (more Batmans, Supermans, etc.)  The biggest issue here was distribution. The only figures I managed to get this year was a John Constantine purchased from a friend online who didn't want the figure from his subscription and the New 52 Batgirl which I had preordered from Big Bad Toy Store.

Doctor Who by Character Options

In 2011, I was eagerly awaiting the new product that Character Options would release for series 6 of the new Doctor Who. There was a bit of decent product, but overall I was underwhelmed.  Too many pointless variants and very bizarre character choices (Character Options released multiple versions of the Winders while only releasing Rory as difficult to obtain exclusive after he and Amy left the show) really left me cold on this line.  Now it looks like Character Options is switching to a mostly 1/18th scale, which means any new Doctor Who figures I buy will be in a different scale than everything I've acquired before.  Note- This doesn't apply to the Classic Doctor Who line: Those figures are looking great and cranking along just fine.

This one was more of a personal preference than anything, but the Marvel Universe line by Hasbro has really ceased to excite me these days. Maybe it is due to the tremendous number of character variations (every other figure seems to be Wolverine, Spiderman, or Iron Man) or perhaps that all of the cool comic pack figures come with a character that I already own. Of course, other than one or two figures (Black Widow and Nick Fury come to mind) the Avengers movie line was quite lacking.  I've actually been selling off a number of my Marvel Universe figures, so if you're interested in buying some of the older ones, let me know. I'll cut you a deal.


A few trends that I've noticed:

*While many companies are making the shift to 1/18th scale figures for cost reasons, I'm finding that I prefer 1/18th less and less unless they are done right (basically only Hasbro seems to accomplish this).

*Distribution was a big issue for me. While I'm not opposed to buying online, not being able to find certain lines at retail really kills my enthusiasm.

*Character selection killed my interest on a few lines. I like a robust amount of character choices, not the same two or three guys over and over.