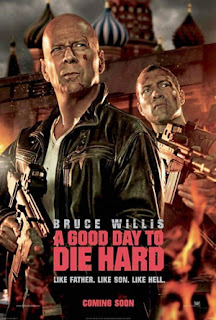 In the pantheon of action movie stars, there are three who stand at the top and look down on the mere girly-men below them: Arnold Schwarzenegger, Sylvester Stallone, and Bruce Willis.  So far this year all three of these icons have had films released. "A Good Day to Die Hard" was certainly the film I was most looking forward to so far this year but unfortunately, while somewhat entertaining, it really failed to live up to my expectations.  While it's always good to see John McClane (Bruce Willis) in action, and I did like the dynamic in partnering him with his son Jack (Jai Courtney), "A Good Day to Die Hard" was far too generic of a film to live up to the Die Hard legacy of unique, interesting plots and diabolical bad guys whom you just can't wait to see die(hard).  The rest of the review after the break...


The basic premise of the film isn't bad at all.  John McClane manages to track down his estranged son, Jack McClane, who seems to have gotten himself in serious legal trouble in Moscow, Russia.  When John finally makes contact with Jack, it turns out that his son is not a criminal but an undercover CIA operative.  Thrown into a volatile international crisis and cut off from all support, father and son are forced to team up to kill the bad guys.  This seems like it should work perfectly as the basis for a Die Hard film. McClane is back in action, he has a new partner, and he is one again thrust into a new and somewhat confined situation (being trapped in a foreign country).  The most concise verdict I can render for this film is that it is extremely average, offering far too few unique or interesting ideas to carry it the whole way through.
While the movie's premise was OK, the story never really picks up and delivers on what could be.  Jack McClane has been working undercover in Russia for three years and is supposed to be assisting Yuri Komarov (Sebastian Koch), a political prisoner who has some undisclosed evidence against Chagarin (Sergei Kolesnikov), a corrupt Russian political official whom the CIA has labeled as a potential threat. Chagarin wants Komarov dead while the CIA wants Chagarin prosecuted.  Jack attempts to help Komarov flee during an attack on a courthouse planned by Chagarin and lead by Chagarin's henchman, Alik (Radivoje Bukvić).  John McClane runs into Jack and Komarov during the escape and quickly joins up with them (after some reluctance from Jack, who refuses to call John "dad"). Of course, John is now thrust into a CIA operation that is quickly going down the drain.  Unable to escape the country as planned, Jack is forced to take Komarov to a safehouse that gets discovered by Alik and his men.  Soon after, Komarov gets taken, we learn that the evidence Komarov has withheld ties Chagarin to the Chernobyl incident, and the responsibility falls on the McClanes to take matters into their own hands.

There are a few plot twists and solid action scenes in the movie, but the biggest problem is that "A Good Day to Die Hard" suffers from a weak script.  Bruce Willis can usually pull of one-liners like a nobody's business, but this script has pretty cringe worthy dialogue from time to time, especially between John and Jack.  There's obviously a lot of tension between these two, but it's not always effectively portrayed.  Some scenes really work, showing John's efforts to try and reconnect himself to his children. Once such depicts John talking to Komarov about his regrets as a father, unaware that Jack is listening.  Of course when directly confronted with his son, McClane goes out of his way to be obnoxious.  Sometimes it's funny, but other times you really can see why Jack hates John.  Near the beginning of the movie, John McClane really comes off as pesky and naive, hindering his son's efforts to do his job.  Perhaps this is intended to show that while John has a talent for police work and blowing stuff up, he has no natural talent for being a father.  What it does, however, is make McClane's character seem like the annoying "sidekick" for the first half of the movie (which I guess he technically is).

Despite being known for so many action hero roles, Bruce Willis is quite a talented and versatile actor.  John McClane has always been one of his best roles as while he is certainly an action hero, he also is a well developed character with a feisty personality and a quick mind, both of which he uses to overcome insurmountable odds.  Unfortunately, it feels like McClane rarely has a chance to exercise his brain muscles here.  One of the defining elements of the Die Hard series has been John thinking his way through difficult situations until he can get the upper hand, but in this film he is stuck in  reckless action mode the majority of the time.  McClane has always seemed like a fairly regular guy in terms of the damage he can take (maybe not so much in "Live Free or Die Hard"), but this movie seems to make both him and his son invincible (or should I say "Unbreakable?").  There just wasn't much room for John McClane to really show his ability to improvise in this film.

I always say that an action movie or revenge film are only as good as the villains the hero is supposed to take out. It is unfortunate, then, that most of the villains are not particularly memorable nor are their motivations made clear.  The two major players, Chagarin and Komarov, really don't do anything particularly interesting.  Chagarin never even encounters the McClanes.  While Komarov isn't the ethical, political prisoner he is originally portrayed as being, his motivations are never fully fleshed out enough to make him more interesting than a one note villain.  There are two villains who are interesting, but unfortunately they are greatly underused.  The first is Alik, a sharply dressed henchman whom John refers to as "Dancer," probably because he both dances and eats raw carrots.  Alik has the qualities to be a proper Die Hard villain and while he pursues the McClanes for awhile, he doesn't get nearly enough time to shine.  The second villain who seems like her potential was squandered is Irina, played by Russian model Yuliya Snigir.  Irina seems like she has the potential to be an incredible bad girl. Unfortunately, we only get glimpses of her sadistic, zealous personality.  I really think she deserved more screen time, also.  While the other Die Hard films have had some exceptional villains to pit John McClane against, the only two interesting ones in this film just don't get enough screen time.

It probably sounds like I'm being pretty hard on "A Good Day to Die Hard." It isn't a "bad" movie, just a disappointing one.  I did enjoy watching it as there are a few good things about it.   Technically, the movie was well done, particularly the sound.  In the multitude of scenes filled with explosions and crumbling buildings, the sounds of falling debris was very intense. It sounded excellent in the theater I watched it in, almost like the theater roof was falling down around me.  I also liked the cinematography.  The movie had a dark, spartan feel to it that did promote a feeling of isolation and anxiety as the camera zoomed in close on characters (Too bad the story didn't promote those same feelings).  Of course there were a few solid action scenes including an extended car chase scene through Moscow, a scene with John and Jack escaping an attack on a CIA safe house, and an extended gunfight in the ruins of Chernobyl.  It was also nice to see a cameo by the lovely Mary Elizabeth Winstead as John's daughter Lucy Genarro-McClane.  Her presence helps to lend more sincerity to John's efforts to reconnect with Jack in this film, as it shows that John has successfully restored his relationship with her.

There was one scene that really and truly felt like a Die Hard scene to me.  It involves a shootout in a gorgeous, chandelier covered hotel ballroom.  The scene features some of the best dialogue in the film between the McClanes as well as some excellent gun play, perhaps one of the only times when we see John use his intellect to gain the upper hand against some bad guys (he destroys a glass ceiling, raining down shards on some mercenaries). There's also a very funny bit that is classic McClane:  In order to hide the sound of Jack cutting his ropes free after being captured, John begins to make fun of Alik's clothes and dancing. He then launches into some hysterical laughing which the villains join in on. It reminded me of the scene where John shoots Gruber in the original Die Hard and the scene with the puppets in Willis' 1991 film "The Last Boyscout".

While sequels give us more of the characters and stories we've come to love, they also always bring with them the difficulty of capturing what made the original film special in the first place.  "A Good Day to Die Hard" manages to take a franchise that has consistently offered engaging story lines and action scenes for four installments and to produce something generic.  Despite a few good scenes, a solid premise, and some nice cinematography, director John Moore fails to make "A Good Day to Die Hard" feel unique or personal.  It feels too by the numbers.  While I certainly enjoyed the movie that was there, I kept waiting until the end credits rolled for that special spark that would have me on the edge of my seat cheering once again for everyone's favorite cowboy.  Unfortunately, it never happened.  If the original Die Hard was "40 Stories of Sheer Adventure," "A Good Day to Die Hard" is only about 15-20 stories.


Barbecue17 is a die hard "Die Hard" fan who still thinks "Yippee-ki-yay, Mr. Falcon" is the best edited for TV line ever.  He owns a John McClane action figure and reviews other action figures and Lego sets on Amazon.com.