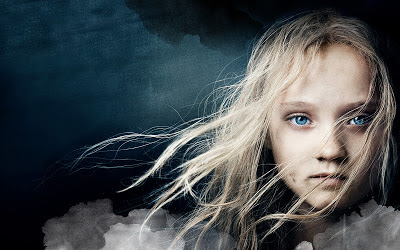 Even before Les Miserables began to make it's initial run in theaters this past holiday season their was already talk that it was the favorite for best picture.  Which when you thought about it, it made a lot of since.  Here we have Tom Hopper whose film The King's Speech won best picture at the 2011 Academy Awards, taking a bit of a risk by turning one of the greatest tales of our time into a completely RAW musical.  When you add this to the fact that musicals are not always received well by today's cinema audiences, you have to give Tom Hopper and the entire cast a ton of credit for just attempting to make this film.  However I still have to wonder if that risk alone warrants a best picture win?

So why would working with former best picture winner Tom Hopper be such a risk for this amazing cast? It is the way Hopper and company approached the music in this film.  Rather than pre-record all the musical numbers and then edit them back over the acting, the only audio used for musical scenes was the audio recorded right on the spot during filming.  The audio is indeed very raw and visceral, but it is one of the things that make this version of Les Mis so unique.  Surprisingly most of this cast handled the musical style quite well.  Hugh Jackman and Anne Hathaway made themselves right at home in this musical world.  Amanda Seyfried was serviceable, and Sacha Baron Cohen as well as Helena Carter brought their own very unique twist to their roles.  On the other hand Russel Crowe's musical performances were absolutely dreadful.  Any presence Crowe was able to bring to the screen as Inspector Javert was completely undone the second he began to sing.

What makes Les Miserables work is also what hurts the film at certain points.  While you have to love the recorded live musical numbers, it just doesn't make up for Russell Crowe ever opening his mouth to sing.  Even though Tom Hopper took a bit of a risk making this film the way he did, you also see his pretension unfold as the film goes on.  In the way he chooses to shoot the film with several unneeded and unwarranted close ups.  As well as his knack for letting many scenes go on much longer than the should, ultimately clocking Les Miserables in at a long winded 2 hour and 37 minute run time.

Overall Les Miserables was an enjoyable film in a day and age where musicals are an afterthought in Hollywood.  Now the question for Les Misrables becomes will the risk Tom Hopper and his entire cast took pay off at the Oscar's?