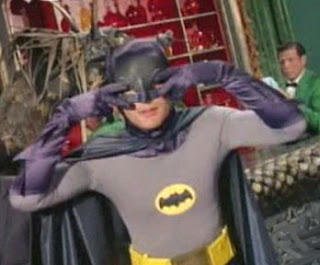 I love the 1960s Batman series starring Adam West.  That's why I'm thrilled to see the first reveals of action figures (and a Batmobile!) from Mattel's new Batman series.  Between Toynewsi.com and Entertainment Earth, we've seen three figures and the Batmobile from this exciting new series. These should be released this summer and retail for around $16 a figure.  So far we've seen:

Batman looks really good. I like that he doesn't have comic book proportions, but  looks just like Adam West in the costume. Some folks have suggested that the chest logo is a little off (these are just prototypes, however) so it's always possible there could be a change. Let's hope he comes with a cool accessory or two (at least a grappling hook and shark repellant).  Heck, I'd even buy one carrying around a giant bomb!


I'm shocked that Mattel is going to release an in-scale Batmobile.  It has been years since they've released a Batmobile for any of their collector focused lines.  This looks really nice and Batman (and presumably Robin) will fit in here nicely due to the fact that he has a cloth cape, not hard plastic.

Burgess Meredith as the Penguin

The Penguin looks great (although the paint on the bow tie looks a little sloppy).  Just really cool to see these guys revealed!

Frank Gorshin as the Riddler

Really good head sculpt on this figure.  Looks just like Frank Gorshin, who played the Riddler in seasons 1 and 3. I wonder if Mattel will ever release a season 2 Riddler, played by John Astin?


Good first reveals all around. I'm excited to see how this line continues as there are plenty of characters to be made.  It seems a no-brainer that we will get Catwoman (hopefully both Julie Newmar, Lee Merriwether, and Eartha Kitt versions). Caesar Romero as the Joker, Burt Ward as Robin, and of course..... Yvonne Craig as Batgirl.
This story will be updated if more figures are revealed!