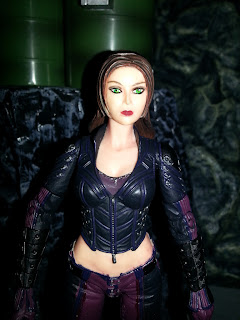 Talia al Ghul, the daughter of Ra's al Ghul and Melisande, first appeared in Detective Comics #411 back in 1971.  Created by Dennis O'Neil and Bob Brown, Talia has proven over and over again to be an interesting and unique part of Batman's life.  While Talia is certainly not part of the "Bat-family," she isn't quite a traditional villain, either.  It has long been established that Batman and Talia both have an affection  for each other despite their differing philosophies towards crime and killing.  In the video game Batman: Arkham City, Talia (voiced by Stana Katic of ABC's Castle) plays a significant role in her father and Dr. Hugo Strange's plot to violently wipe out the criminal element of Gotham City.  I promise, I'll get to the figure after the break....


For being such a prominent DC Comics character, a love interest of Batman, and the mother of Damien Wayne, it seems highly illogical that the only action figure of Talia available until this release was in a 2001 4-pack from the 4.5 inch Batman line by Hasbro (the Shadows of Gotham boxed set).  The Arkham City Talia al Ghul was certainly one of my most anticipated action figures of this year as there aren't a great many prominent Batman characters who haven't appeared in the 6-7 inch scale.  In terms of the number of characters released, DC Collectibles (formerly DC Direct) has done a great job with their Arkham Asylum/ Arkham City lines.  It's probably my favorite Batman line ever.  Up until Arkham City series 4, that is.....

Unfortunately, while Talia was one of my most anticipated action figures of the year, poor quality control has reared it's ugly head: my Talia had a broken knee joint out of the package and her right arm fell off at the shoulder shortly after.  This really, really bugs me as it is the fifth DC Collectibles product that I have had problems with since May 2012, right around when they first started releasing product under the name of DC Collectibles.  I don't have any concrete proof that the shift in identity necessary lead to the downgrade in quality, but up until that point the dozens of DC Direct products I purchased had virtually no problems (I know there are collectors who have said they have had problems with DC Direct products in the past, but I never did).  Since July of last year I have had the arm fall of of my deluxe Arkham Asylum Killer Croc (right out of the package), a bent batarang on my New 52 Batgirl bust (right out of the package), a ripped gauntlet on my Arkham City Azrael (right out of the package), Deadshot's arm fell off (3 days after buying him and doing nothing but posing him on a shelf), and now Talia suffers.  What's the problem?
When I look at the plastic being used for the joints on figures like Killer Croc, Talia, and Deadshot, I notice that it seems to be a very brittle, translucent plastic. The pegs attaching the joints to the main body do not seem to have twisted off but to simply have crumbled away, something very disturbing even for someone who just leaves their figures on the shelves. I have attempted on two separate occasions to get in touch with DC Collectibles about this issue through their customer service department and have never heard back from them.


For a paragraph or two, however, I'm going to pretend that there are no quality controls issues, however, and instead focus on the sculpt, paint, and articulation of the figure:
Talia has the following joints: Boot swivels, hinged knees, swivel thighs, ball jointed shoulders, bicep swivels, hinged elbows, swivel forearms, and a true ball jointed head.  If she weren't already broken out of the package (good try-Editor), I imagine you would get some decent poses out of her, at least in her upper body.  (The lower body, while articulated, leaves little room to actually pose her.)  The arm joints are really well thought out and nicely integrated into the sculpt, which is quite good.  The legs, while featuring a few points of articulation, are hampered by the fact that she doesn't have ball jointed hips. Without ball jointed hips, all the lower leg articulation in the world is nearly meaningless. 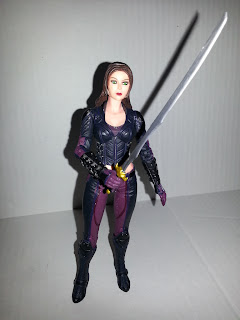 While the face isn't perfect, overall this is a really nice representation of Talia.  Her outfit is excellently sculpted with lots of small details in her vest, gauntlets, and boots.  Check out the buttons on her pants, also: DC Collectibles does such a great job with their sculpting that it's a shame the QC is so terrible.  The paint work from the neck down is excellent, but since her hair is not a separate piece from her head sculpt extra care was needed to tackle the fine line between her hair and her face. I've seen some Talias look OK while others didn't have enough paint coverage on her hair, leaving her with flesh colored hair on the sides of her face (an unusual look to be sure).
DC Collectibles has cut stands from all of their lines (another real shame) so Talia's only accessory is a sword.  It's nice that she comes with something, although the sword feels a little brittle and has some very gloppy paint applications.  It fits easily and tightly in her right hand, however, and is an important accessory to complete the character.
So, Talia al Ghul. Good paint, great sculpt, good articulation, decent accessories, and horrible QC.  Can I recommend this figure?  Only if you're going to keep your figure mint in the package or if you're willing to do a little self repair.  Personally, I've made a decision not to pick up any DC Collectibles action figures until I learn that their quality control has greatly improved. Talia makes the fifth DC Collectibles product that has broken either right out of the package or unprovoked.  That really irritates me because I have always loved DC Direct/ DC Collectibles merchandise, but there's only so much I'm willing to up with. I've attempted to get in touch with DC Collectibles on two separate occasions with no response. I've also heard from at least one comic shop owner that they've decided to stop carrying DC Collectibles products since they just kept having customers  returning broken figures for refunds.  It seems that lots of fans are having QC issues and there's really no excuse for that on a $20+ action figure. I'd rather DC Collectibles just go back to simple cut joints than to keep releasing defective merchandise.  Talia could have been a fantastic addition to nearly every Batman collection. Instead, she was the straw that broke this camel's back in regards to my decisions of not buying any future product.

NOTE: All pictures were taken after I fixed the figure myself by creating a new peg and hole to attach the arm with.  I also worked to stabilize the knee myself.  Because the figure was able to be fixed is the only reason she was spared from a crap rating.  I do not personally believe that collectors should have to fix the product they buy, however. 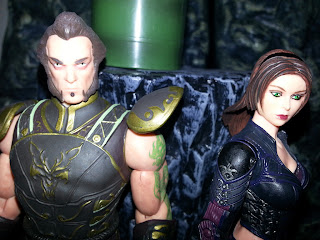 Barbecue17 is really upset whenever his toys break.  Comfort him in his solace by leaving happy comments on his action figure pictures on his Flickr account.