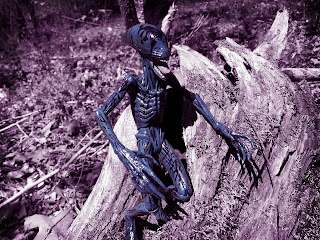 So, is Prometheus a prequel to Alien?  I think so. While it isn't specifically about any of the characters from that series, it does present itself as taking place in a universe where certain events transpire that will one day make the events of the Alien films possible.  The film Prometheus does contain the derelict ship from Alien, multiple creatures that may be precursors to facehuggers, an Engineer in the "Space Jockey" outfit, some very Alien like etchings on the walls, the Weyland Corporation, and the Deacon, a creature who seems to be an earlyevolution of the standard xenomorph from the Alien films.  Named by director Ridley Scott due to the resemblance of the creature's head with a bishop's mitre, the Deacon was certainly a welcome surprise when it appeared at the end of Prometheus.  Now you can own a Deacon of your own thanks to NECA who has produced the figure in their second wave of Prometheus toys alongside of David 8. Read on for the full review: 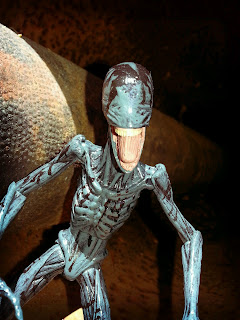 The Deacon comes in right around the 7 inch mark, although he'll look shorter as he is intended to be displayed in a bit of a crouching stance that only measures around 6 to 6 1/2 inches.  He's designed in a fairly realistic style that will let him fit in with other movie based toys in this scale.  Even if you weren't a fan of Prometheus, you most certainly can enjoy an alien like creature chilling out on your shelf.  Of course, if an slimy alien weren't enough, NECA has really packed this guy with some cool accessories. 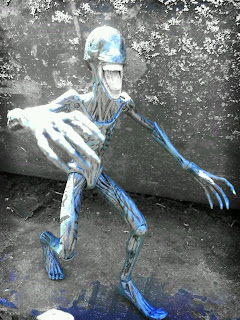 The Deacon is a very well articulated figure.  He has a great range of motion as all of his joints are ball joints: ankles, knees, hips, abdomen, shoulders, elbows, wrists, and head.  His jaw is also hinged and his lower jaw can actually slide out in a manner reminiscent of the xenomorphs' inner mouth.  The best part is that while there is tons of articulation, the sculpt still looks excellent. You might think on a thinner and somewhat spindly creature like the Deacon that articulation would break up the sculpt, but here you'd be wrong: not only do the joints not break up the sculpt, but most of them aren't even noticeable at a glance.  The only complaint I have is that the Deacon has no bicep swivels.  Seriously, I keep noticing companies leaving those off. What gives?

The sculpt is pretty good.  It certainly resembles the creature in the film, although I can't help but feel that the details are a little soft.  I think the level of gloss on the figure and the paint work makes the sculpt difficult to see, although it could be that there just isn't that much detail on the creature in the film.  Still, the body is quite nicely textured, especially the chest and hands.  The head and mouth sculpt are perfect, too.  Just look at the top row of teeth, the tongue, and the little feelers in the bottom of the mouth. This guy is creepy. 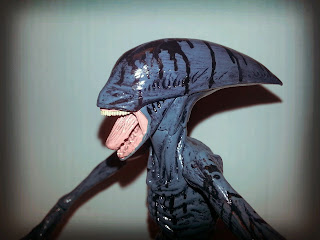 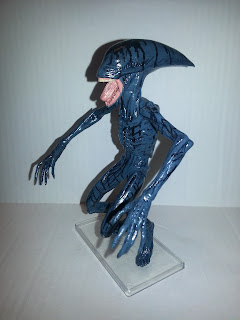 I think the paintwork is the most difficult part of this figure for me to review.  It's not bad. Not by a long shot.  It's just...is toyish the right word? I'm not sure.  Since the only time we see the creature in Prometheus is immediately after he's erupted from the chest of an unfortunate Engineer, it makes since that he'd be glossy and slimy. The glossy look is captured well, but I'm not sure how much the gloss makes me think "drenched in body fluids" versus "toy cast in shiny plastic."  The paintwork on the mouth is excellent, but the black details covering the body seem to be applied almost haphazardly. This certainly isn't a bad figure nor a bad paint job, but it doesn't seem to possess the same level of realism that most NECA figures based off of movie properties possess.

Ok, ready for me to get to stop complaining? Let's talk about accessories. If you count each separate piece, then the Deacon comes with five accessories! I love accessories, so let's get started. First, he comes with a clear plastic stand that is molded to support the figure in his freak, inhuman stance.  It works nice and I love stands.  Second and third are two Hammerpedes from the film. While they're not overly detailed and certainly not as awe-striking as the creatures in the film, they are both bendable.  One features a closed hood and the other has an open hood.  Last, we get an incredibly cool two part accessory that I actually like more than the figure itself: fossil of the space jockey helmet with an Engineer's head inside.  Beautiful paint and excellent sculpting combine to really create a breathtaking accessory that not only looks amazing, but factors into the film's plot.  Probably my favorite accessory of this year, so far. 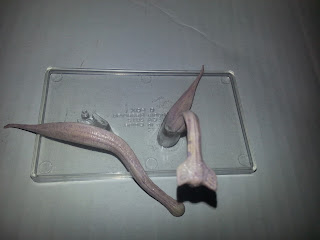 Overall, this is a great figure. While I'm not wild about the paint work and wish the figure had some bicep swivels, there's always something fun about an alien like figure.  NECA managed to work in so many nice features with this guy (the Hammerpedes, the moving jaw, and the Engineer's head) that he definitely feels like he's worth your money.  NECA has plans for at least three more Prometheus figures as long as sales are strong enough for series 2, so if you want Dr. Elizabeth Shaw, Holloway, and Fifield, make sure to snag this figure. Seriously, it's worth it for the Engineer's head alone! 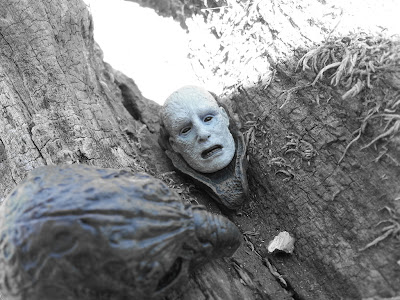 Barbecue17 has done his part in working to get more Prometheus figures from NECA.  If you haven't done your part yet, head on over to his Flickr account to look at more pictures of the Prometheus toys.  Let him convince you.