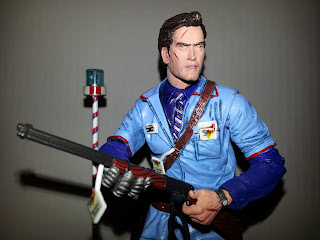 "Army of Darkness" was the first film in the Evil Dead series that I ever experienced.  I was staying at my grandmother's house for awhile during  the summer of 1999 and was going through boxes of old VHS tapes that various family members and friends has left in my grandma's basement after a large yard sale.  I found some real gems that summer, including a VHS copy of "Raiders of the Lost Ark" (I had only ever seen "Temple of Doom", "The Last Crusade", and the Young Indiana Jones Chronicles), "From Dusk 'til Dawn", and of course, "Army of Darkness."  Both of those films are in on the list of my top 5 favorite films of all time (Raiders is #1, "Army of Darkness" is #4) and I spent much of that summer watching them over and over.  Since then I have become not just a huge fan of the Evil Dead series (and splatstick in general) but also of the pinnacle of acting and manliness that is Bruce Campbell.  As a toy collector and an Evil Dead fan, it just makes since that I would pick up Evil Dead action figures, right? Take a look at this excellent S-Mart Ash figure from my collection after the break.... 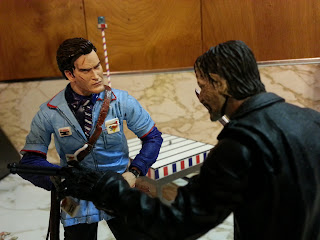 NECA released this figure as part of the sixth series of their Cult Classics line in 1998.  Ash was definitely the standout figure of the wave, although he was released alongside Michael and David from "The Lost Boys" and the Hare Krishna Zombie from "Dawn of the Dead."  This wasn't the first Ash figure ever made, however, now was it even the first S-Mart Ash figure ever made.  Back in 2005, Palisades released a series of 1/18th scaled Army of Darkness figures.  While the first series was sold in two packs, the second series was sold blind boxed.  One of those series 2 blind boxed figures was Ash in his S-Mart outfit.  I purchased quite a few of the series 1 packs from a Suncoast Video clearance sale but found that they broke far too easily (often right out of the package) and thus never put in the effort to obtain series 2. 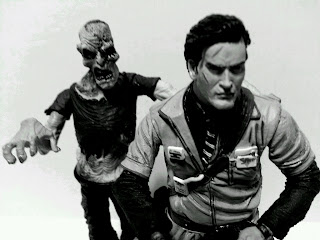 So anyways, about the figure huh?  Ash is in the 7 inch scale and is decked out in his S-Mart garb of a blue smock with all kinds of name tags and flare hanging off of it.  He'd actually look really nice if it weren't for the smock, as he appears to be wearing a nice blue dress shirt and a striped tie underneath his customer service garb.  All of the folds on the cloth and different materials are well represented in the sculpting.  There's also lots of little details on the name tags and such hanging from the shit, although some of them are stickers which might fall off if you handle the figure too much.  Just so you don't mistake him for your average run of the mill retail employee, Ash also has a rifle holster slung over his shoulder with the actual holster hanging by his hip, plenty of cuts and scars, and the metal hand that he invented for himself during "Army of Darkness" to replace the hand he lopped off with a chainsaw.  Ash is a pretty excellent figure and was even better by the standards of 2008.
If there's any action figure company who consistently continues to push it's self to produce better product, it's NECA.  Whether it's sculpting, articulation, or accessories, NECA always seems willing to push themselves to the next level.  Just look at the head sculpt of this Ash: it's very good, but compare it to the head sculpts of the newer Ash figures from the Evil Dead 2 line. There's a lot of innovation going on in that company.  While S-Mart Ash is an excellent figure, there are still some issues with the figure that might frustrate you if you decided to go and pick up the figure in light of the strides that NECA has made.  I'll try to point these out as I go through and look at the figure in more depth. 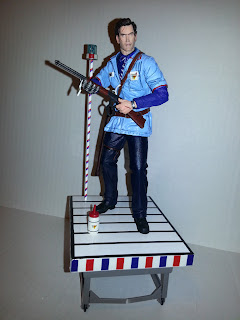 I think NECA does a better job of creating cool accessories than any figure out there. Whether it's the gobs of cool stuff the Evil Dead 2 figures came with, the diorama elements from their Nightmare Before Christmas line, or the various elements that come with their new Prometheus figures, NECA makes good accessories, which are always one of my favorite parts of any toy line.  Ash here comes with some very cool, movie accurate accessories.  First, he comes with the rifle he uses to fight off the Deadite customer during the epilogue of Army of Darkness.  It's a very nicely sculpted and painted accessory.  The lever is opened as if Ash is loading another shell into the gun. It has a great wood grain pattern on it and even a sculpted price tag. While it's a little thick, it's still a nice detail.  In order to be more mobile while fighting the Deadite in the S-Mart, Ash jumps on a wheeled display rack and rolls into action.  The piece needs assembled, but it makes a very impressive display for Ash, has wheels that actually role, and has a pole with a blue light on top (a reference to the famous K-Mart Blue Light Specials).  And what was the S-Mart blue light special of the day? Why it was S-Mart branded water bottles, of course!  So NECA threw in one of those water bottles as well. It's details like that make me feel like NECA cares about their properties and their customers and aren't just out to make a quick buck.
Now for my complaints, be careful with the accessories. The plastic used is very brittle and the stickers can have a tendency to peel if handled frequently.  The figure has some varied points of articulation, but other than moving his arms and his head you aren't going to get a lot of poses out of him.  He really is intended to be a figure you get in a pose you like and just leave on display.  While NECA has been moving away from this over the past few years, this was pretty standard for collector figures back in the 2000s. 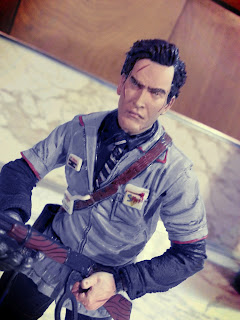 While "Army of Darkness" was the first Evil Dead film I saw, it wasn't my first exposure to the character.  Toy Fare magazine always included plenty of references to the films and to Ash in their issues.  I remember reading the first issue of Toy Fare in December of 1996 and wondering who exactly this character was. It's a shame it took me so long to find out, but I've watched the movie enough times to make up for all of those lost years. This figure excellently captures the mixture of coolness and absurdity that makes Ash such a lovable and iconic character.  Work shed!

Barbecue17 always shops S-Mart: he shops at S-Mart.  He also takes lots of pictures of action figures and puts them on Flickr. You got that?