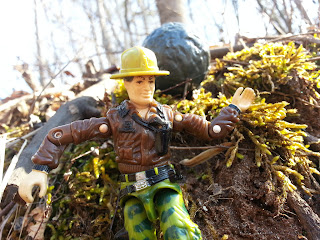 I'm really excited for the first community installment of Barbecue's Show & Tell.  When I started taking pictures of toys that I loved as a kid, had nostalgic memories or funny stories attached to them, or were just plain awesome, I didn't expect to hear so many cool stories from other toy collectors.  Today my two special guests are my fellow He-Man.orger Faker II, Splittyhead, a collector who posts excellent photos on Flickr, and another Flickr friend and Nerditis contributor, Ridereyu.  Allright class, I expect you to give them your full and undivided attention after the break....


Faker II tells us about Luke Skywalker, Jedi Knight from Kenner's Return of the Jedi Line 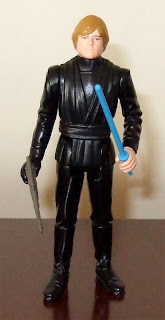 When I was a kid, I wanted Jedi Knight Luke Skywalker pretty bad. After hunting what seemed like an eternity, I only ever saw Jedi Luke in the stores once while on vacation visiting relatives in a different state. I had no money but my parents, knowing how bad I wanted him, bought him for me on the condition that I bring home good grades on my next report card. I made many trips to the garage over the next month where Jedi Luke stood still sealed high atop a shelf. When report cards came home and my grades met my parents’ approval I finally got to free Jedi Luke from his plastic blister carded prison.

Not only was this figure special to me because I only ever saw him in the stores once, but he was also different from the one all my friends had. I had managed to acquire the rare snap cape/blue saber variant. All my friends doubted me until I showed them the rare accessories. I took that figure with me everywhere I went. I ended up loosing his cape eventually. I was so heartbroken that my dad actually sewed me a new cape made from black fabric.

My original childhood Jedi Luke was tossed out along with most of my 80’s toys. When I started collecting toys I think I at one time owned up to 6 Jedi Knight Luke Skywalkers, all either incomplete or with green saber and stitch cape. I didn’t manage to acquire another blue saber/snap cape variant until around 1997. A friend of mine happened to see one for sale at an antique mall about 40 minutes from my house. The next day he told me about it and we went up there together so I could buy it. That one has been in my collection ever since.

Well here he is. THE 'ONE'. Zippy. This is my vintage plush animal I had since a wee child that was my SPECIAL BUDDY. Like my security blanket. The one I carried with me everywhere (I even have school class writings on feet bottoms). I remember carrying him in tears to my mom the first time one of his seams split, and worringly waiting anxiously for her to 'get to it'. I then learned how to sew. He's been through many seam sewing and hair brush-outs since (I suspect his hair is much thinner now) (also his arm squeaker is loooong broken).

Also, this is also The One, THE toy (that most of us have at some point in childhood) that gives us the certain belief (often carried, even though we don't admit it, into adulthood) that toys are alive, that there is some sort of intelligent awareness and soul staring back at us behind those plastic eyes, and that makes us always sad when we see an unloved and discarded toy. Because of him, I treated all my other toys much more nicely. I mean we know toys aren't REALLY alive. But maybe they are. Just a little bit. But no, not really. ...but they are. But no. But YES.
I just got him from the attic and spruced him up and outfitted him appropriately (magically, his face turned from grey to flesh under the soapy water!). And yes, he IS wearing a Chatty Cathy girls jacket, but he's ZIPPY. He does what he wants.
[toy info: Zip the monkey 70's by Rushton Company,or 'Zippy' as I've called him all these years.]

Ridureyu tells us about "The Claw" from M.U.S.C.L.E.

Thanks again to Faker II, Splittyhead, and Ridureyu for sharing some great pictures and some special childhood memories. If you're interested in sharing anything on Show & Tell, either drop by and submit your work to the Flickr group  Barbecue's Show & Tell or send me an email at thepicreview@gmail.com.