Comic Review: Guardians of the Galaxy #0.1 and #1 (Confirmed: Epic and Great)

After the success Marvel had with the Avengers franchise across all forms of media from comics to movies,to television the past couple of years, the company decided it could literally afford a little lee way and take the risk of exploring and focusing on some of their lesser known characters and franchises.  The property at the forefront of this new Marvel risk taking exercise is the lesser known franchise, 'The Guardians of the Galaxy'.  Unless you are a hardcore Marvel fan boy or girl odds are you don't know much about the Guardians, but if Marvel has their way you will rather quickly.   So Marvel wants you to care about The Guardians of the Galaxy, the question is should you? Find out after the break......


Marvel has decided to push the cosmic team in an all new on going series written by Brian Michael Bendis and drawn by an artist they only bring out for major projects like Marvel's 'Civil War,' the incredibly talented Steve McNiven.  Outside of the comics medium, Marvel studios has put such a major emphasis on the Guardians that they are getting their own Summer blockbuster directed by James Gunn on August 1st, 2014, and they have also appeared in Disney XD's very popular Avenger's Earth Mightiest Heroes show last year.  On two different fronts, both in film and comics, Marvel has tied the Guardians to a major fight between the Avengers and Thanos. The comics version entitled 'Infinity" will be out later this year, and Marvel Studios/Disney will put the Avengers up against Thanos in Avengers 2, out May 1st, 2015.


Guardians of the Galaxy #0.1 (Confirmed: EPIC) 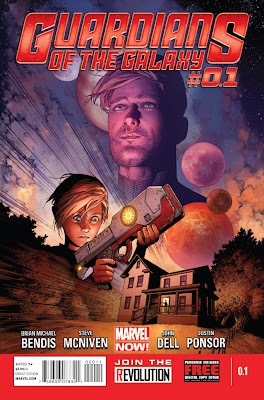 Brian Michael Bendis chose an interesting, but brilliant approach when debuting his new Guardians of the Galaxy story.  Rather than hop right into the guardians kicking cosmic ass, he chose to tell a much needed and definitive origin story of the Guardians' leader Peter Quill, A.K.A Star-Lord.  The book takes you all the way through Peter's conception up until his leadership of the Guardians.  More importantly, the relationship dynamic between Peter and his father Jason of Spartex is setup smoothly, which looks like it will be a driving force of Bendis' run on the book.  Bendis did a masterful job of making the reader care about the lesser known character of Peter Quill and covering a lot of ground in only a single issue while never making the reader feel overwhelmed during the process.  Also within the issue, a lesser known alien race known as the Badoon are reintroduced to readers which we later find out will be one of the major threats to earth within this Guardian's book.  The fact that this book accomplishes so much within a 0.1 issue and sets up so many story lines while making you care about lesser known characters truly puts this 0.1 issue of Guardians at an EPIC status.


By the time we get to Guardian's of the Galaxy #1 so many story lines have been setup making it easier for this issue to get right into the action.  The book starts with a meeting in a very Star Wars cantina-like setting between Peter Quill and his father Jason who is now revealed to be the leader of the Spartex Planetary system.  Rather than taking his rightful place beside his father and ruling over Spartex, Peter makes it abundantly clear he would much rather spend his time protecting the Galaxy as opposed to ruling it.  Peter has alienated his father so much that he has chosen to declare Earth off limits to all extra terrestrial activity so the council of galactic empires no longer has to worry about our planet, thus leaving an open invitation to the Badoon to attack it.


Rather than following the will of his Father Peter chooses to protect earth instead of ignoring it, which is where this story really hits it's stride.  Iron Man joins the party as a of type liaison to the Guardians from the Avengers (He says it's for a much needed Earth vacation, but we all know those Illuminati members have their own secret agendas!) all while sporting a brand new EPIC looking deep space suit labeled by Tony Stark as the god killer armor.  For those who may have wondered whether or not putting Iron Man into this story would detract from the Guardians themselves, the answer is yes and no.  Having Tony Stark in this book gives it the kind of mainstream validity it needs and the only Guardian who suffers time wise because of Stark is Drax the Destoryer.  Drax never really has a chance to shine in this book while the other respective members of the Guardian's all have their respective moments, especially Groot. Who would have ever thought a giant talking tree could be so bad ass?!


At this point you are either thinking one of two things: #1. A book that has a blaster wielding raccoon and Marvel's version of Han Solo in Star Lord? Sign me up! or #2.  If your definition of bad ass is a giant talking tree, I question your taste in entertainment.  Comic fans and geeks both hardcore and casual, I encourage you to give this book and property a shot! Don't let preconceived notions or unrealistic characters keep you from missing out on one of the best stories Marvel has to offer.  Marvel has put top notch talent to work on this property across all mediums of their company, and so far the results are showing.  Who knows? Come 2015 we could be talking about the Guardians of the Galaxy in the same breath as the Avengers, so why not get in on the ground floor while you still can, before it just becomes the hip thing to be a fan of a bad ass talking raccoon?