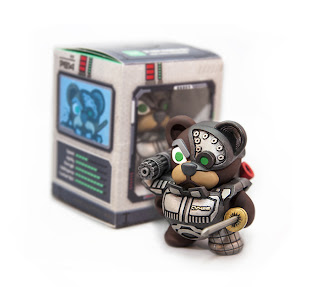 If you're in the market for either a new flash drive or a robotic warrior teddy bear, then PapaBehr has got you covered! PapaBehr is a Vinyl USB Figure being produced through a Kickstarter initiative that features removable magnetic armor and weapons and a removable head which contains either an 8 or 16GB Flash drive.  He's an excellent desktop companion that will also aid you in your productivity!  This isn't just any bear/flash drive hybrid, however; as the Kickstarter campaign says, PapaBehr is "A scientist turned toy bear on a quest to find his daughter and destroy the backstabbing corporation that hired him to save the world."  That's amazing!  More about this incredibly cool toy/computer accessory after the break...


The designers of PapaBehr have put lots of time (over 200 hours!) and energy into designing this product and coming up with an insanely cool backstory.  Backstories are wonderful because when your coworker asks you, "What's the deal with the robot bear on your desk?" you'll be ready to unravel a truly epic yarn to them.  Besides just the figure, there are plenty of other cool items that you can get for funding this Kickstarter project such as stickers, very cool t-shirts, and some nice art prints of the PapaBehr characters.


As mentioned, Papa Behr's head is removable and serves as either an 8 or 16 GB flash drive, depending on the model you choose. There are also unpainted PapaBehr's available for those who want to paint their own figure. To get a fully painted PapaBehr, you'll need to pitch in $35 for the 8GB model and $45 for the 16 GB model.

While I appreciate the combination of a designer vinyl toy with office functionality, as a fan of toys and action figures I really appreciate the way that PapaBehr uses a combination of magnets and molded pieces to keep his armor on.  It's a very cool feature that will ensure that he remains playable while not having parts fall over the place, leading to missing pieces.  There is the possiblity that through stretch goals we may see more armor sets for PapaBehr in the future, which is a very cool thing.  C'mon, most of us spend far too much time at our desks; shouldn't we make sure our desks are fun?  This seems like a very neat project with a very recognizable and well designed character.  PapaBehr has 35 days left to secure funding and is already over 75% of the way there.  Order your own PapaBehr here: PapaBehr on Kickstarter.

Stay tuned for an interview with the creators of PapaBehr on ThEpic Review!