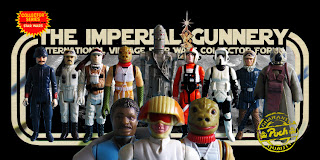 Whenever I see my fellow action figure collectors taking the time to support a good cause, I gotta give them a shout out.  Darth Berizing, owner and head janitor of the Imperial Gunnery, an international vintage Star Wars action figure forum, has spearheaded an effort to hold a raffle to raise money for the animal rescue group Hope for Paws.  Check out the details here and get on board if you're interested.  Every five dollar donation gets you an entry in the raffle with the possibility to win some truly interesting Star Wars prizes.  Whether you want to throw some money towards the raffle or just want to send a smaller donation to Hope for Paws itself it's the animals who will win.  The raffle will be open until April 21st, 2013.

Thanks to Darth Berizing and the good folks over the the Imperial Gunnery for making this happen!