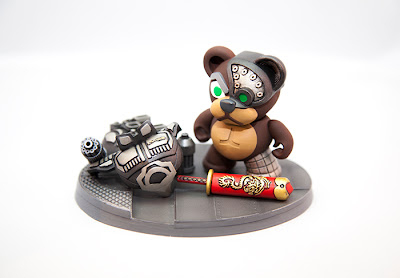 I was really impressed by PapaBehr, a Kickstarter project for a vinyl USB figurine that features a cool back story, magnetic accessories and armor, and a working 8 or 16 GB flashdrive built into the removable head of the figure.  David-Thao Nguyen, the creator of PapaBehr, was nice enough to answer a few questions about the incredibly cool upcoming toy and flash drive hybrid with me.  Check out what he has to say after the break...


Barbecue17: David, I'm really intrigued by the story of PapaBehr- is this based off of a true story? If not, what lead you guys to come up with this crazy idea? David-Thao Nguyen: Jason Lam and myself created the story (no true story!). We were inspired by a lot of comics and Manga out there that have really compelling stories. We wanted to focus on something different in this story about PapaBehr. It’s usually the typical “scientist creates cyborg or robot boy to save the world.” We wanted PapaBehr to be a broken hero and to focus more on what it means to lose everything and to persevere in a world that has been greatly damaged because of him. So far it’s a very character-driven story, which we feel are the best kinds!

BBQ17:  I love the idea of using magnetic armor and weapons to attach accessories to the figure. Can you explain a little bit more about how this feature works and what PapaBehr fans might expect to see in the future? DTN: The idea came about when we were thinking about ways to make PapaBehr more unique. We’ve played with a ton of toys that have some sort of clip or snap-on function to attach armor and weapons. It was always a pain in the butt to put on and would most likely break. So we decided to utilize magnets to make it easy! The magnets are located inside the body and within the inside of the armor and sheath. Fans can expect more interchangeable armor and weapon sets in the future. We’re currently working on a “Neo-Samurai” armor set!
BBQ17:  Is this the first toy project you've worked on?
DTN: This is the very first toy we’ve ever produced or worked on. It took us a while to make PapaBehr because we had no prior experience making toys whatsoever…except of course for playing with them haha. 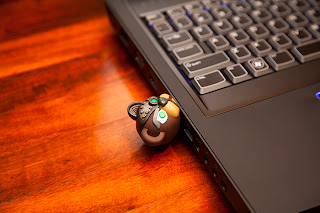 BBQ17: It sounds like you understand the desire of many professionals to have toys at our desks/ workstations/ command consoles: Why do you think adults still like to have goofy knick knacks at our desks? DTN: I think there’s a kid in all of us. Toys and figurines have always given us that nostalgia of simpler times and it reminds us of the great imagination that we all have. It’s a drag working at your desk for hours and not being reminded of any of that. Well for us it is anyway!
BBQ17: What toys do you keep at your desk? DTN: I have a BMO toy (from Adventure Time), a few Kid Robot Futurama vinyls, a Batman POP! Vinyl, and quite a few others. I change it up now and again.
BBQ17: If PapaBehr were to be integrated into any other toyline, modern or classic, what toyline do you think he would fit best in and why? DTN: Woof, that’s a tough question. We’re in a strange realm between being a vinyl toy and a tech gadget. It would be awesome to be a part of Kidrobot’s lineup one day; they’re a huge inspiration to us. Bandai has always been one of our favorites too. They make all sorts of awesome detailed robots (Gundam etc.). So I can see us fitting in there. 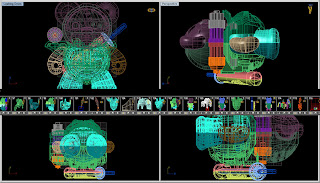 BBQ17: What have been some of the biggest challenges in bringing this product to fruitition? DTN: There have been quite a few challenges. One being that we had never made a toy before haha. So everything was self taught and based on our own intuition. The prototype process with the 3D printer was a challenge too. The pieces are very fragile and the growing process (3D printing) isn’t exactly a perfect science. Sometimes the build would screw up and we would waste full days. I think though the biggest challenge was just pushing ourselves and getting PapaBehr out there. We set out to make something cool and it was scary at first to put it out there for people to see, but it’s been definitely worth it. We have more challenges ahead now with actually producing PapaBehr on a large scale, but we’re looking forward to it!

BBQ17. Are there any future plans for PapaBehr you care to announce? Future characters, designs, a breakfast cereal perhaps? DTN: We’re currently working on a limited “Destroyed PapaBehr”. This is before he gets his armor upgrade. He’s missing his eye, part of his head, and his left leg. We’re constantly sketching new weapons and armor sets too!
BBQ17: What type of files do you think would be most appropriate to store on a PapaBehr flash drive? DTN: Ones that are best kept secret! Haha

BBQ17: Hypothetical Question: PapaBehr is on the run and he has to crash at your place for the weekend. What's the arrangement? DTN: He can take the couch and no using weapons in the house.

Once again, many thanks to David-Thao Nguyen.  Make sure to run over to Kickstarter and check out the PapaBehr Vinyl USB Figurine.  There's about 33 days left in the campaign and he's over 90% of the way to being successfully funded.  Also, check out there website at www.papabehr.com.  I love their quote about their company: "We're a couple of dudes that wanted to make a RAD toy. So we made one."  Amen, gentlemen. 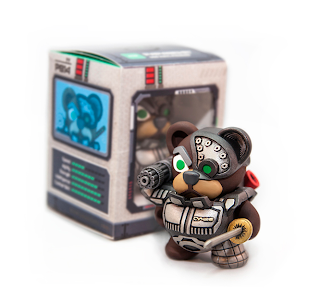