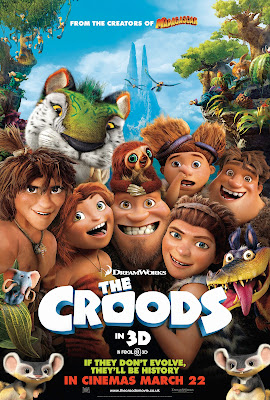 This past Monday, I decided to take a “me” day. I went to our lovely little local Carmike theater and bought one ticket to see DreamWorks Picture's The Croods, an hour and a half long animated film that soared far and beyond my greatest expectations! What made this kid’s movie jump to the top of my “favorite movies I’ve seen this year list?” Well, I’ll tell you after the break…

The Croods is a story about a prehistoric family that lives in a cave, and according to Eep (Emma Stone), what they are doing isn’t living, it’s surviving. Eep is the young, rebellious daughter of Grug (Nicolas Cage) and Ugga Crood (Catherine Keener). Grug has kept his caveman family alive because of two things: his strength and the rules. “The rules” tell the family how to stay alive, like: “new things are bad,” “the cave is safe” and “never be caught out in the dark.” Grug has successfully been keeping his little family alive as the three other cavemen families around them have died because of injury, sickness, and bad luck.

Eep is young and full of curiosity. She wants to explore the world around her and have fun, but her father sees this as being irresponsible and unsafe. He tries to keep a tight grip on her, but once Eep meets a strange new male, Grug slowly loses his grip over her and his whole family.

Guy (Ryan Reynolds) is a traveling human passing by the Grug’s territory as he tries to out run “the end of the world.” He meets Eep and the two immediately are attracted to each other. He begins to open her eyes to new things like fire, shoes, and pets. Eventually the end of the world catches up to Guy and the Croods as a large piece of rock wall splinters from a cliff and plunges straight through their safe cave. With everything they know gone, the Croods must journey to a new home. And this journey will not be an easy one for anybody.

First off, in order to truly appreciate this film you must be a person who enjoys “family films” to begin with. Now I will say, I bet this movie could turn a few people. But think of it as a person who mildly enjoys sci-fi films and then sees Star Wars for the first time. And yes, I’m going there, The Croods has officially bumped DreamWorks into the realm of Pixar and Disney! I know! I never thought it would happen either!

The first thing I noticed as I watched this movie were the voice actors. DreamWorks seriously got some great voices to play their only speaking roles. Nicolas Cage pulled out a very impressive performance as Grug, the over-protective father. Usually I find Nicolas to be pretty bland in his acting, but I guess when all you sense of him is his voice, he can pull it off! I was fully emotionally invested in this father whose sole purpose was to protect the family he loved. Emma Stone and Ryan Reynolds performed well together as the two young adults searching for independence, freedom, and love. I mean, I’ll never complain about having to listen to Ryan’s voice for an hour and a half! (Try watching Green Lantern, then! *Editor*)

The second thing I noticed was the absolutely stunning art in this movie. There are breathtaking landscapes and creatively designed creatures everywhere you look! I remember thinking, “this is Avatar all over again!” Remember back to the sense of wonder and awe we all experienced the first time we saw Avatar in 3D. I got that same feeling as my eyes were accosted by brilliant colors and fantastic cinematography. The visuals played an equal role in the emotional climate of the movie just as much as the dialogue and the music.

Sure this movie has your age-old love story in it between Eep and Guy, but truthfully, The Croods is really a Father/Daughter story. There aren’t very many great father/daughter stories in the family film genre. The only ones I could really think of as the predominate story line was The Little Mermaid. (There are lots of movies that have father/daughter dynamics but not like The Croods) We watch the tension between loving but over-protective father and young and adventurous daughter grow to a breaking point in the first thirty minutes of the film until the Croods’ world literally comes crashing down around them. As they journey to safety, Grug struggles to fulfill his purpose as the protector of the family and battles throwing over his old rules (which kept the family alive when everybody else died) to progress and forward thinking (represented by Guy). Eep slowly begins to understand the importance of the rules that she so strongly abhorred, and therefore slowly starts to understand just how much she loves her daddy. The strength of the father/daughter story is what eventually lead me to crying right there in the theatre (and I was completely unashamed! I love my Daddy!). The writers and creators knew they were truly telling this story to the older children and parents that were coming to see this movie. It was truly touching!

Overall, this film was abundantly enjoyable with many great laugh out loud moments as well as tender, loving moments. If you have children or just really enjoy watching family films (like me and my dad) then this movie is a must see! I will definitely be buying this movie when it comes to DVD!

When she isn’t crying her eyes out in a dark theater, Generbeener likes to create cos-play costumes and watch Family Guy episodes on Netflix.