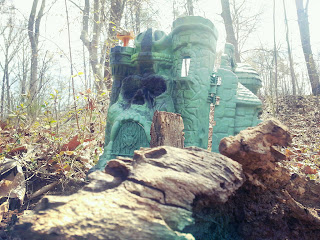 Back in February of 2012, prior to New York Toy Fair, I created a list of the 25 figures I most wanted to see in Mattel's Masters of the Universe line.  I saw my list as a compilation of characters whose absence would truly be felt if the line ended without their being immortalized in plastic, and thus it contains a mixture of characters who are personal favorites, characters whom I felt represented something significant in the property's history, and characters whom I felt were integral both the story being told in the bios and in their respective medias.  The full list after the break:

Since then, 7 of those characters (Ram-Man, Jitsu, Frosta, Mosquitor, Spikor, Rattlor, and Mekaneck) have all been released in the line. They're sitting on my shelf right now.

Another 4 are now slated for release this year.  Clamp Champ and New Adventures He-Man will be released in July, Castaspella in August, and Mantenna in October.

So who does that leave from my list and why are they significant?

While MOTU has always had a rich mythology, it wasn't until the MYP series that said mythology began to be organized and put into something resembling a storyline.  The creators of the 200x comic also had lofty plans to tie together all the worlds of Masters of the Universe, bringing in elements from She-Ra and the Powers of Grayskull.  While those plans never came to fruition, we can see their influence on what Mattel has done with the MOTUC bios (a unified canon). To me, Illumina, while only hinted at, represents the hope of fans during those years and the promise of what might have been. Had that comic series been able to continue and it's creators given more freedom, we could easily see MOTU having experienced the same kind of renaissance that Transformers and G.I. Joe have. Illumina seems like a figure Mattel really doesn't want to do, although she did make a mark as the second choice in the fan figure poll last year.


While many fans seem to discount the 1987 movie, I think it's often forgotten that it hit at both the height and the beginning of the decline of MOTU mania and is evidence that Hollywood was interested enough in our favorite toy line that they wanted to give it the major motion picture treatment. That counts for something and it seems only right that the only characters we can get figures of from the film (due to the licensing rights issues) should be introduced into MOTUC.  Not only that, but Gwildor factors into the bios through the Cosmic Key invention and actors Anthony De Longis (Blade) and Pons Maar (Saurod) have both been involved in MOTU fandom, whether through filming promo videos for the 2013 sub campaign or attending Power Con.  Besides, the late, great Billy Barty deserves another figure in his likeness, doesn't he?


It's no secret that not every MOTU fan likes the New Adventures of He-Man. Still, it's a pretty decent sized part of the MOTU mythos and produced a very cool, if different, toy line.  I put NA Skeletor, Hydron, and Flogg on the list because not only are they faction leaders, but having them in the line gives us the complete figures from the first series of New Adventures figures. That seems like the least we could do for NA fans.


As one of the last "human" characters left to be made, Rio Blast is not only a popular vintage character but one of my favorites. I'm really excited to see how he turns out in Classics.  Remember: No Rio, we riot!  Two-Bad finishes the roster from the first three years and is also an insanely popular character.


Imp, Kowl, Glimmer, Queen Angella
While Imp is on this list because he's one of my favorite characters (love that evil little guy), the other three characters are really integral to the story of She-Ra and the Princess of Power and to the Great Rebellion.  Heck, Glimmer pretty much leads the rebellion (not really, but technically) and Angella is the queen of Brightmoon.  And Kowl? Totally knows Adora's secret.


While some fans don't care for appearance of the concept or prototype characters in MOTUC, I personally love it. I really want Eldor for three reasons: 1) He fills the fantasy archetypical role of the wise old wizard which MOTUC doesn't have a representative of yet. 2) He's one of the few prototype figures that was marketed to and widely known by most fans. 3) He seems like he would play an integral role in the MOTUC bio canon.


While I hope we get many more characters than just these listed here (I have a second list of my next 25 that maybe I'll share next year on MOTU day (so far, only one of those 25 has been announced).  What are your top MOTU figures? Let us know in the comments below and remember to check out the following sites who are also participating in Masters of the Universe day:

Barbecue17's most eagerly anticipated MOTUC figure is a version of Imp as he appears in that episode when he disguises himself as a picture. We'll probably see him any day now. While you're waiting, go ahead and check out his Flickr account for more cool action figure photos.