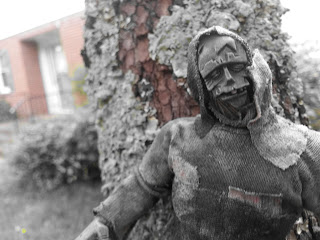 If you haven't checked it out yet, make sure to check out my review of the Assemblage Juggernaut from Valerobots.  Not only is it a cool toy, but in it I fill you in on the story behind Valerobots, the nifty cool creations of master customizer Rupert Valero.  You can check out more of Valero's one of a kind creations at his Etsy store, but I'm here today to show you the one of a kind creation I purchased recently: the Assemblage Zombie.  Remember, this is a unique custom creation so while the traditional categories may not fully apply (such as sculpt), I'm still using them to cover all the bases in showcasing this excellent figure.  A more traditional custom than some of Valero's Assmeblage figures, the Assemblage Zombie is built off of an action figure base with a great new paint job and some excellent fabric clothing.  Check him out after the break, if you dare.......

The Zombie is just shy of 7 inches, putting him in scale with MOTUC, DC Direct figures, and most NECA horror and movie figures.  While he may be a tad short next to Mezco's excellent Hellboy lines, that's absolutely where I'm putting him.  The style of the head really has the feel of a Mike Mignola styled corpse, although I believe it comes from a ThreeA zombie action figure. 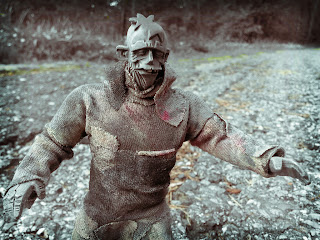 Utilizing what appears to be a DC Direct New Gods Orion body, with hands and feet that I can't identify, the Zombie isn't super articulated, but he can take a few nice shambling poses.  He features hinged toes, hinged ankles with rockers, shin swivels, hinged knees, swivel thighs, swivel waist, ball jointed shoulders, hinged elbows, swivel wrists, ball jointed head.  All of the articulation feels solid and allows for some subtle movements that help the figure to look dynamic when displayed on your shelf. Perhaps the best point of articulation on the figure is the ball jointed head. Hidden by the collar and hood of his outfit, the Zombie has an excellent range of motion in his head's ball joint that really lets you get some cool poses while moving little but his head. If there's any action figure joint that really expresses emotion to me, it's the ball joint in the head. Done right, it does wonders for any action figure. 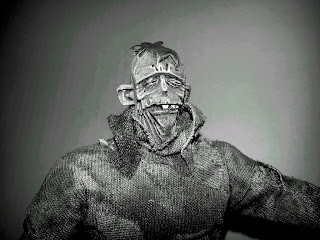 I'll reiterate that since this is a custom figure, I'm not really judging this figure on "sculpt" but rather the sculpted pieces that were chosen.  I mentioned the head above, but I'll mention it again. It is an exceptionally sculpted zombie head that while somewhat stylized, is certainly not caricatured.  It really reminds me of the style of Mike Mignola, one of my favorite artists, and thus it has a rough, jaggedy look to it's edges.  Even it's closed eyes and somewhat large misshapen teeth remind me of a creature that would be lurking in the background of a Hellboy or BPRD comic.  The hands look pretty similar in style to the head with thick, squared fingers and deep wrinkles in the skin.  The more I look at the feet, the more I think they may have come from a Marvel Legends figure from Toy Biz, perhaps the Zombie figure that came with that one Marvel Legends Monsters set.  They're appropriately weathered and decrepit, so they work for the Zombie just fine. 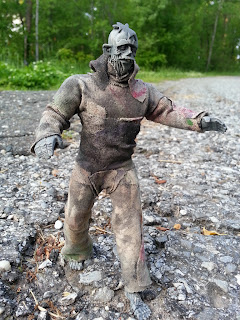 One of the most defining features of a Valerobots figure is the excellent paintwork.  I'm not sure that the head, hands, and feet needed to be repainted, but either way they look excellent with a very sickly grayish color.  The cloth outfit that the Zombie wears looks excellent and cobbled together.  It covers his most of his body and even has a cool hood that the figure can wear.  It's made from various strips of cloth that at first glance make you think you're looking at a camouflage pattern, but a closer eye reveals that really they've just been soiled with a variety of unknown stains. There's actually some blood spatter on the upper left torso and left sleeve. Does this blood belong to the Zombie or someone else?  I just hope it isn't Chris' blood! 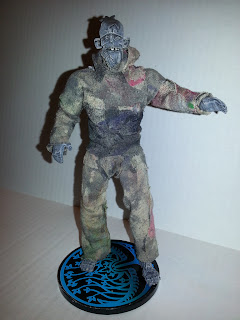 While there aren't any traditional accessories included with the figure, Valero did include a  stand. It's actually from one of the Mezco Hellboy 2: The Golden Army figures. Since I don't already have one (I have all of the 7-8 inch figures) I'm guessing that maybe it came with one of the 1/18th scale figures.  It fits the Zombie perfectly and is a neat way to keep him standing on the shelf. 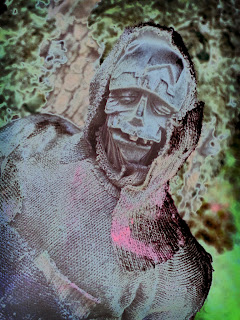 While he's not your typical zombie, the Assemblage Zombie is a nice addition to a shelf of 6-7 inch zombies (I have one), your shelf of horror figures (I have quite a few of those, two), or your Hellboy stuff, which is where I'm going to keep him. He's a really nice figure that while not "super articulated" still manages to possess the ability to take quite a few interesting poses.  His head sculpt just oozes character (and pus) and his outfit is wonderfully dingy.  He's a fantastic and versatile action figure that certainly has a treasured place in my collection. While you won't be able to get this Zombie again, I did notice a few more variant zombies on Valero's Etsy store, so head on over if you're interested in picking up one of your own! Confirmed: Great and a half!

While Barbecue17 now appreciates nearly everything with zombies, as a child he experienced crippling nightmares thanks to the Ghostbusters Zombie action figure.  That figure was freaking creepy.  When not plotting new ways to kill zombies, he puts pictures of toys and stuff on his Flickr account.