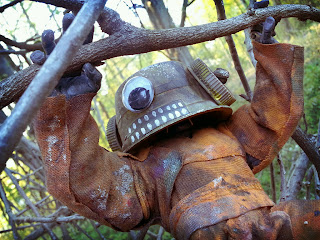 In 2011, I had the privilege of picking up one of the original Valerobots which Rupert Valero created while on a tour of duty in Afghanistan. I had read this excellent interview from Infinite Hollywood which in which Newton Gimmick interviewed Mr. Valero and soon found myself hitting up his Etsy store to pick a robot up for myself.  Recently Valero put quite a few new creations on his Etsy store and I knew I had to buy some.  I ended up purchasing three. I considered buying them all, but didn't want to deprive everyone of the joy of these excellent customs. And seriously, whether you're looking at these figures in hand or in photographs, they are extremely impressive.  Today I'm looking at one of the newer Valerobots, the Assemblage Juggernaut.  I've never reviewed a figure quite like the Assemblage Juggernaut before, so I'll do the best I can to use the traditional categories of articulation, sculpt, paint, etc.  Just realize that this is not a mass produced item but a one of a kind custom art project.  Check him out after the break........


Coming in at a little over 7 1/2 inches, the Assemblage Juggernaut is made from a hodgepodge of different materials.  The base body appears to be a frankensteined 6 1/2 inch action figure of some sort with custom made clothes, a head made from a DCUC Imperiex figure, and a helmet made from various scraps like bottle caps, googly eyes, an applesauce container, and paracord.  I'm not sure whether this figure is intended to represent someone wearing a helmet or if the giant gold head and googly eye are the Juggernaut's actual head (that's my preference) but it does give you multiple display options. The Juggernaut comes with a little friend, also, who is made out of a chess pawn.  He's a great companion to the Juggernaut, a character that strikes me as being a somewhat lonely and misunderstood being. 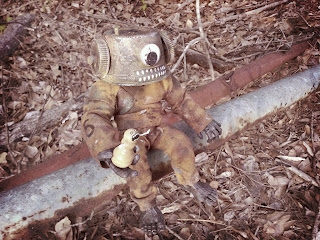 While he's made from a few different action figures and various materials, the Assemblage Juggernaut still has plenty of useful articulation.  He features: hinged ankles with rocker joints, hinged knees, thigh swivels, swivel hips, a ball jointed mid torso, ball jointed shoulders, hinged elbows, swivel wrists, hinged palms, and a ball jointed head.  While nearly all of the articulation is hidden by the outfit, I was astounded at the quality of the movement. Perhaps it's simply due to the strength of the character which Valero has created, but every point of movement really seems to bring the figure to life. While I imagine that a large part of this work was based upon Valero using what he had available, the pieces come together so well.  The articulated hands are really nice as they allow the Juggernaut to climb, grip various accessories, and even hold the included minifigure in the palm of his hand. 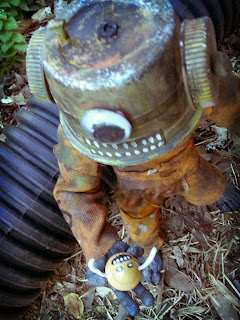 Sculpt isn't really an applicable choice here, so I'll focus on the composition of the figure.  The hands and the feet appear to come from the same source, a Hasbro Marvel figure from 2007 which I cannot identify (maybe a Hulk figure?).  The main body is fully covered by the cloth outfit, which appears to be handmade and is truly an amazing piece. While it seems to resemble a prison jumpsuit of some kind, the closer you look at it the more you can see that it's made from lots of individual pieces of cloth. Since it's covered, I can't tell what the main body used here is.  The head underneath the giant helmet/head is the DCUC Imperiex head, but it has been modified and now had a hole for the helmet to snap into via a Lego Technic peg.  The helmet is a really unique piece, and as I mentioned earlier I prefer to pretend that it is the Juggernaut's actual head.  The use of a large sized "googly eye" with a broken back and the eye fixed in place gives the creature a familiar, but somewhat offsetting look.  It's really unique and expressive. The helmet has a some antenna of some kind on top and two bottle caps on the side that are held on by paracord. This really look cool and gives the helmet even more personality. 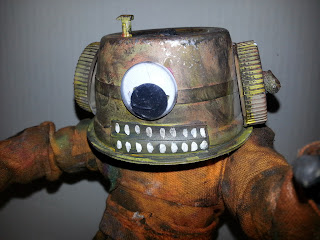 So the choice of parts and a base figure body is well done. Why does the figure really shine then? The paint.  In everything I've received from him (I own four Valerobots), Valero's paint is always exceptional.  The Juggernaut's skin is interesting in that it's a very, very dark gray and contrasts brilliantly with the orange jumpsuit.  While I've talked about how much I like the style and design of the jumpsuit, I would be remiss if I didn't mention the way that Valero has soiled and stained the jumpsuit.  Various stains and paint smudges give the jumpsuit a soiled, lived in look. There's also a mysterious "5" on the back of the outfit, further adding to the mystery of this figure.  The outfit is extremely well done and while I'm not sure that Hot Toys, Enterbay, or any other company producing high end collectible figures has produced a figure with stained and soiled cloth garments, I would certainly bet that Valero would rival if not surpass their efforts on the Assemblage Juggernaut.  The helmet is brought to life with a variety of metallic paints that truly fool me every time I pick up the figure; I consistently expect to feel the touch of cold metal rather than plastic. It's looks rusty, weathered, and has "tim" mysteriously written on the back. Is this the Juggernaut's name? Did he take the helmet from someone? Is he a toy himself that belonged to someone else? I love a figure that's full of storytelling potential! 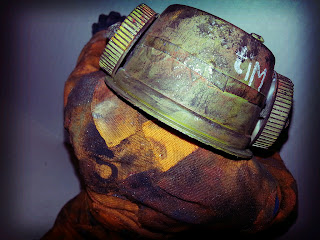 The helmet is removable, so you could consider it a accessory if you wanted to. I own the piece, however, and I'm considering it the creature's actual head. The little companion I mentioned earlier also counts as an accessory. He's made from a wooden chess pawn, has arms made of wires, and fits nicely on in the Juggernaut's hand.  I imagine the Juggernaut as being a rather shy creature, largely ignorant of the goings on around him.  His little friend, with his large, open mouth painted on, is more vocal and motivated member of this duo. 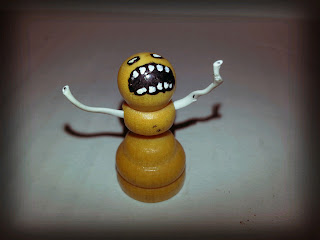 If this were a figure I had purchased off the shelf or through an online toy store, I would give it every bit as much praise as I've given it in my review thus far and confirm it: Epic.  If I'm being honest, it is easily one of the best action figures I've purchased this year.  It captures the eye of anyone who sees it in my collection, it's really fun to play with, it's incredibly photogenic, and fires up your imagination with little details that hint at a larger story for this creature.  I'm really thrilled to own this figure and eagerly await to see what cool stuff Valero comes up with in the future. If you're interested in owning this figure, unfortunately for you it's one of a kind. If you'd like something else comparably awesome, check out Valero's Etsy store, Valerobots. 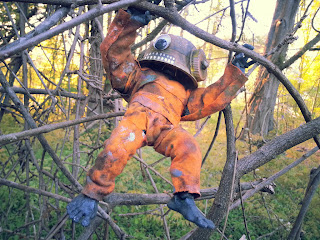 Barbecue17 tried his hand at customizing once.  It involved a Power of the Force Greedo figure, a drill, and a lighter.  It resulted in a crude, but effective "blasted" Greedo figure and some minor flesh wounds.  He posts pictures of plenty of non lame toys on his Flickr account.