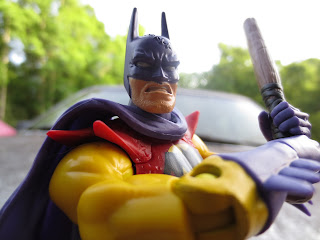 Remember when your mom told you, "Don't believe everything you read?"  Well, it's time to put that into practice. While Mattel claims that this figure is the Batman of Planet-X, an alien scientist named Tlano who appeared in Batman #113 back in 1958 and was inspired by Bruce Wayne's crime fighting alter ego.  He's a really obscure character and would make an interesting addition to the Batman Unlimited line. Too bad this isn't that character. By looking at the face, chest emblem, baseball bat, raggedy cape, stitches on the costume, and the presence of a modern Bat-mite, you can tell that this is actually Bruce Wayne in his alternate persona of the Batman of Zur-en-arrh" from the Batman: RIP storyline by Grant Morrison.  As part of his never ending series of back up plans, Bruce had the personality of the Batman of Zur-en-arrh stored in his subconscious just in case his mind was ever compromised or overwhelmed.  Cool huh? Well, the figure is even cooler. Check it out after the break..... 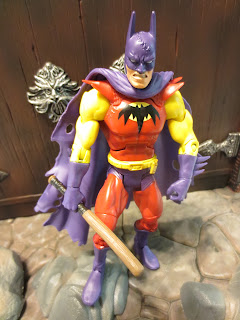 The Batman of Zur-en-arrh is built just like a DC Universe Classics figure and will fit in fine with the rest of your collection.  He's a little over 6 1/2 inches tall if you count the ears on his cowl. Surprisingly, while his arms and legs appear to be reused from previous Batman figures, his chest and head are all knew.  If you've ever owned a DC Universe Classics figure, you'll know what you're in for articulation wise: hinged ankles, hinged knees, swivel thighs, H hinged hips, a swivel waist, an ab hinge, ball jointed shoulders, swivel biceps, hinged elbows, swivel wrists, and a ball jointed head.  The articulation is nice and solid, giving you plenty of useful points at which to pose the Caped Crusader.  I have no complaints here and there's nothing new or faulty. 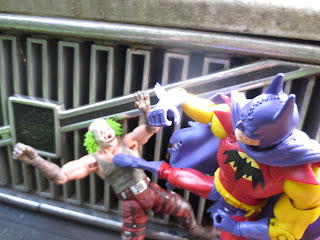 While a good number of DCUC figures used different paint applications to turn the same three or four bodies into new figures, Zur-en-arrh Batman actually has quite a few unique pieces to him to give his outfit a raggedy, cobbled together look.  The legs and arms might be reused, although it is nice to see that the boots and gloves are not simply painted on, but are acutally sculpted with a ridge between the boots or gloves and the costume.  I'm also really pleased to report that the spikes on Batman's gauntlets are somewhat firm and not at all bent.  They're not so solid as to be brittle or anything, but they're hard enough to maintain their shape.  There is a sculpted belt piece between the torso and the waist that features Zur-en-arrh Batman's unique belt with the "Bat-radia" attached (it was a gift from Tlano after Batman helped him destroy a bunch of evil robots).  The torso sculpt is what makes things very interesting. It's clearly a new (or at least heavily retooled) torso because it features various seams and stitches from where Bruce was forced to sew this costume in desperation, another detail that shows this is in fact Bruce in his "Batman of Zur-en-arrh" persona and not simply the Planet-X Batman which the package describes.  The stitching looks really good and along with the tattered cape and pointy, jagged shoulder pads gives this Batman the raggedy look he needs.  The stitches even continue onto the cowl.  The headsculpt is quite good, as Batman has a very nasty scowl on his face and quite a bit of stubble on his chin. He's excellent. 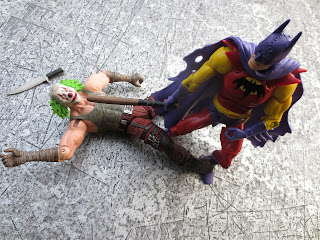 The paint work is really good, although most of the bright colors are simply the result of the figure being molded in the correct colors of plastic.  The thing anyone will definitely notice about this Batman is that he's bright.  Not as bad as some of the older Kenner Batman figures, but bright nonetheless.  He's wearing a red outfit with yellow sleeves; definitely not your typical Batman colors.  The gloves, boots, cowl, and cape are all purple.  The logo on his chest is very neatly applied, the painted edges of his shorts, boots, and gloves are very clean and neat, and the face is well done.  There's even some minor gold details on his belt and radio.  Overall, a very nice representation of this particular Bat outfit. It'll certainly stand out amidst any Batman collection. 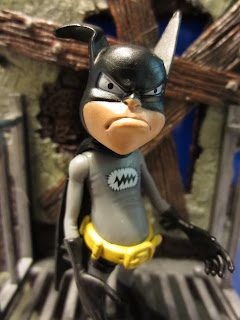 I was impressed that the Batman of Zur-en-arrh comes with two accessories, both of which played a major part in the events of R.I.P.  First we get Bat-mite (although he was referred to as Bat-might in this story) who is a fully functional minifigure.  He even has multiple points of articulation: swivel thighs, swivel shoulders, and a swivel head.  While Bat-mite was avalaible as a K-Mart exclusive in the Silver Age Batman figure from the second series of the Batman Legacy line, he's not the same Bat-mite offered here.  Not only is the paint different (as this Bat-mite is dressed in the more modern black and grey Batman outfit) but the head sculpt is different, as well. The K-Mart silver age Bat-mite had a goofy grin; this Bat-mite has a more serious scowl on his face. He's still a goofy looking character, though, with his skinny legs and paunchy stomach, but at least he's doing his best to emulate the modern Bats and serve as Bruce's conscious to temper the more violent and savage Zur-en-arrh personality  Secondly, Batman comes with a baseball bat.  Not having any gadgets, Batman has to make do with what he has and uses this simple wooden bat to cause trouble (perhaps this simple bat is a metaphor for Batman's struggle in RIP of having to build himself back up from nothing, or perhaps it is just a bat).  It's molded in a plastic that is only a little rubbery and it has a nice wood grain pattern to it. The handle is wrapped in various strips of electrical tape. So two comic accurate accessories in a comic accurate Batman figure?  I'm stunned! 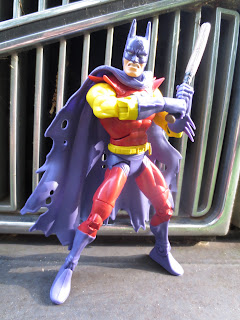 I love this figure. Not only does it reference an obscure silver age Batman story, but it's also directly based on a really cool plot point from one of the best Batman writers ever, Grant Morrison.  Morrison expertly uses concepts from the much crazier silver age Batman stories and brings them into the modern era, something that I really appreciate. So where does the whole "Zur-en-arrh" phrase come from? While it was the name of the planet (Zurr-En-Arrh) in the silver age story, it was also Bruce's misunderstanding of Thomas Wayne's last words:  ("The sad thing is they'd probably throw someone like Zorro in Arkham." Zorro in Arkham. Zur-en-arrh. Get it?  Anyways, for more info go read Grant Morrison's run on Batman. For a great action figure, go pick this guy up.  He's a solid figure with unique sculpting and some very issue specific details and accessories. Isn't it amazing that Mattel managed to put something awesome like this out? Go Mattel! You'll always get my kudos when it is deserved, and it's deserved here. Confirmed: Epic easily due to the great accessories, colorful paint and plastic, solid articulation, and all around attention to detail. 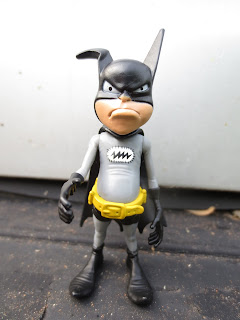 I have reviewed some of Mattel's other Batman and DC Unlimited figures, such as The Dark Knight Returns Batman, and the Injustice Batman.

Barbecue17 stores an alternate persona in his subconscious for whenever his mind is compromised. It's the persona of the Reel Brad Bell.  Barbecue17 gains the ability to teach history and tweet, but loses the ability to pronounce the word "sewer." Check out Barbecue17's Flickr account for more fun photos.