Mattel "Surprises" Collectors with the Spirit of Hordak: News and A Rant by Barbecue17 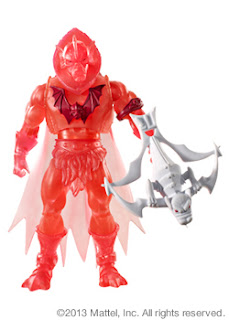 After a long day at an out of town conference, I decided to briefly check a few sites last Wednesday night and stepped right into the madness that was Mattel's first unannounced release, the Spirit of Hordak.  For those of you who are somehow still unaware of this, the Spirit of Hordak is simply the first release Hordak figure molded in translucent red paint with Hordak's bat logos having some darker red paint decos.  Ever since Power Con back in September, Mattel has teased us with the white Hordak crossbow (the vintage Hordak had a white crossbow) so now we know who that accessory comes with. Not only was the Spirit of Hordak an unannounced figure (we had never seen or heard of it before it went on sale) but it also is scheduled to appear for sale randomly on Mattycollector.com.  As you can imagine, this has upset a few fans. People have gotten angry, and some have even insinuated this somehow means the death of the line (not sure how they reason that, though). Still, it's an interesting idea. My thoughts after the break......


An interesting idea, but not an idea I really like. Here's my thoughts. Plain and simple, I believe this is intended to drive traffic to Mattycollector.com. While many fans perhaps subscribe simply to avoid using the site thanks to Digital River, I would speculate that most typically check the site monthly. There's very little that goes on there that doesn't get reported elsewhere. Mattycollector has their own forums, but they're really a pretty weird place to hang around and frankly just not very useful for actual discussion of Mattel product.  With Mattel discontinuing many of the product lines sold on Mattycollector, perhaps they're just hurting and need a boost in traffic. They may figure that people buying this figure are more likely to throw "Matty Essentials" in their carts as well. Still, there's a few things about this that bug me:

1.) Since this figure appears randomly, that means that you're most likely going to be purchasing this figure alone. Tack on around $9.90 for slow shipping that takes a vacation in Sparks, Nevada, and add more for decent shipping options or international. It's been said over and over that cost, not lack of interest, is what will kill his line. While Mattel can't necessarily control material costs or shipping costs, they can work to ship more product together. Essentially, Mattel is just getting fans for extra shipping.

2.) This was already a really expensive month for MOTUC fans. You have Karatti and the Fighting Foe Men three pack, so that's already over $100 in figures. Why not tack on an additional $36 minimum. I know it's not Mattel's problem if folks are poor, but Mattel should at least not want to compete with themselves.

3.)Everything about this line, from the subscription model itself to the way Scott Neitlich touted the value of the fans who want everything during the subscription drive of 2012, has catered to the completionist collectors. And every year, Mattel seems to do something else crazy to try and one up the completionists.  Originally fans wanted to be sure that they could get all the figures, so in 2009 Mattel began offering subscriptions.  Then they started offering variants and larger figures outside of the subs. The fans who signed up saying they wanted everything, whether it was She-Ra or random peasant #3, now had to go onto Mattycollector.com monthly and compete with others to try and have complete collections. So in 2011, Mattel offered an all in sub that featured the quarterly figures and creatures. So what happened next? Mattel began offering figures that didn't come in the "all in subscription." Yup, once again fans who gave Mattel their credit card number and said, "I want everyone, no matter if it's Mosquitor, or Battle Pigeon" had to get back online to order product outside the "all in subscription."  So Mattel decided to implement the early access sales for subholders this year.  It was supposed to give subscribers a chance to have a first shot at the figures that weren't included in the "all-in sub." Make sense? Ok, good. Now Mattel has released figures that no one knows when they'll be released, that release alongside no other figures, and that even the folks who have committed to buying everything can't guarantee they'll be able to buy.  Umm, yeah.

Screw that. The minute I heard about this, I just bought one off of Ebay for $60.  Do you know why? Because I work and I sleep. That only leaves around 8 hours a day when I'm free to pursue other interests. I'd much rather play with my toys, photograph my toys, and if I have to hunt for toys, do so in a physical store where my wife and I can also talk, walk around, goof around, get exercise, and have fun.  Does anyone else really think that things like random sales are fun?  Hearing about the Filmation subscription? That was fun. The behind the scenes editorials that Scott Neitlich was writing for awhile? Those were fun. Heck, even the secret accessories were kind of fun in a "they weren't obnoxious" kind of way. I'm not sure why something like Hordak being a random pop up is fun. It's fun in the same way that standing in a crowded line at Subway and having the sandwich artist tell you that they're out of cold cuts is fun. It's fun in the way that trying to find a pumpkin the day before Thanksgiving is fun.  Now at this point, Mattel is offering the Spirit of Hordak through an early access sale, but that's still time during the day that I just don't have to log onto a website to buy toys. I'm still content with my decision.

Is collecting really about the hunt?  I keep hearing people talk about that and reminisce about how great action figure hunting used to be. Sure, it's fun to go out to the store and find something new, but to be honest, the majority of the action figures I buy these days are purchased through online stores. In the late 90's and early 2000's, there was something kind of fun about actually hunting for toys. Stores seemed to restock often and there were more lines to choose from. Eventually, though, I realized I was doing far too much hunting, gas was kind of expensive, and I really had very little to show for my time. I collect action figures because I like the toys. I like photographing them, I like posing them, I like reviewing them, and I like talking about them. If you like random stuff, go play the lottery or dig for buried treasure.  Hunting toys down and spending extra money to ship a single figure really isn't that great. Anyways, that's my rant for the week.