Netflix for the Poor Kids: Safety Not Guaranteed (Confirmed EPIC!) 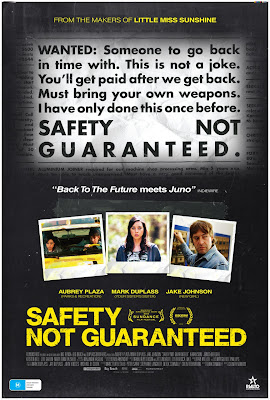 What fan girl doesn't enjoy the heady mixture of love, humanity, and sci-fi? Safety Not Guaranteed is a beautiful exploration of the human condition through the vehicle of sci-fi with an indie film flare. This movie was my first Epic rated film of the year, and what a great movie to kick off our new segment "Netflix for the Poor Kids." More about this great film after the break...

Safety Not Guaranteed is set up as an indie film capturing the human struggle of four people: an emo-ish young woman struggling with the tragic loss of her mother, a brilliant man looking for someone to trust, a shallow journalist facing the time old fear of middle age, and a quiet young man learning how to take risks. The story begins with Jeff Schwensen (Jake Johnson), a prominent journalist at a magazine in Seattle, proposing to investigate a newspaper classified ad that reads:

Jeff chooses Darius (Aubrey Plaza) and Arnau (Karan Soni), two post undergrad interns, to travel with him to the beach town of Ocean View to find the writer of the classified ad and figure out what he's up to. Is he some crazy man who's finally taken a leap off the deep end? Why does he want to go back in time? Bring your own weapons? To answer all these questions, Darius is given the task of befriending the ad writer, Kenneth Calloway (Mark Duplass).

Darius and Kenneth quickly form a tight bond of friendship after they both admit to their reason for going back in time: saving a loved one from an untimely and tragic death. Kenneth wants to go back to save his high school sweetheart from being killed by a car that comes crashing through her living room. Darius wants to save her mother from being in the wrong place at the wrong time, something Darius blames herself for.


Meanwhile, Jeff revels his true motive for going to the town of Ocean View: to track down his high school sweetheart, Belinda (Kristen Bell), the proverbial "girl who got away." Jeff has a built up image in his head of this stunning, young woman, and when he finds her working as a cosmetologist he is disillusioned by the truth: she is approaching middle age. This realization forces Jeff to finally look at himself critically and he sees his own fear of growing older and living an unfulfilled life reflected in his unrealistic expectations of Belinda.

After some prodding from Darius and Arnau, Jeff makes contact with Belinda. He quickly learns that even though they are both growing older, they still have a lot of life to live. He realizes that age can bring on a new kind of beauty, a deeper love and understanding between two people who have experienced the hardships of life and come out the other end the better for it.


Now, you're probably wondering, "where does sci-fi enter in to the picture?" Well between the secret agents, the car chase, and -oh yeah- the whole time travel thing, the sci-fi elements of this film are expertly woven in to the story in a way that gives validity and authenticity to the plot and its characters. There is no campy humor or cheesy special effects, just plausibility and reality. That's all I'll say about that. Don't want to ruin the rest of the movie for anyone!

The characters are what really make this movie so delightful. They are fully realized individuals, all struggling with real life problems and learning what it means to be human. Through training to go back in time, sarcastic banter, and an intimate camping scene we watch as a beautiful friendship blossoms between two very hurting, very human characters. After harsh reality hits, we see two other characters learn what is means to live in the moment and make something of it. We've all been in these kinds of situation which only endears the audience to characters even more.


Generbeener hopes you find this film as enjoyable as a lovely game of Pazaak accompanied with a fine vintage of blue milk!