A New Batgirl Review: Batgirl #25 from Heroclix by Wizkids/ NECA 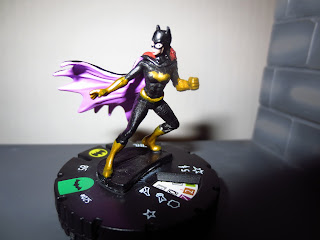 Here's another brief look at a cool new Batgirl collectible I've acquired. This time it's a Heroclix figure of Ms. Barabara Gordon in her New 52 Batgirl costume.  If you're not familiar with Heroclix, it's a collectible miniature gaming system that uses a rotating base (called the "combat dial system") to track the character's stats. Heroclix has changed hands twice in it's 11 year run (it's not owned by NECA) and has included characters from multiple properties.  While I have a few random Heroclix figures, I've never actually played the game. I simply bought this figure because it was Batgirl. She was released in the "Batman" series of miniatures in November 2012 that are based on New 52 versions of a variety of DC characters with a heavy focus on Batman-related characters (although the set does have others; I noticed a Beast Boy).  Batgirl is classified as an uncommon figure, and is listed as number 25 in the set.  Take a brief look at her after the break....

Apparently, Heroclix figures are in the same scale as O-gauge model railroads, which is 1:45 in most of Europe and 1:48 in the United States.  I measured the figure to be 1 1/4 inches tall (although she's crouching in a bit of a combat stance) with a 1/4 inch base.  She doesn't seem to be exaggerated in proportions at all, unlike many other mini figures.  The figure is a solid, unarticulated minifigure that is permanently attached to it's base.  The bottom of the base does turn, however, showing different statistics through a window.  Having never played the game, I have no clue what they mean. 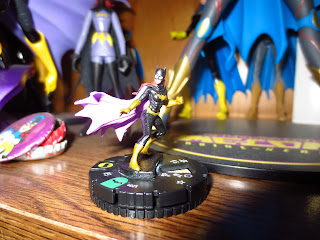 When you look at the figure, remember how small it is.  The sculpt is not unlike something you'd find in a gumball machine, a Dungeons & Dragons miniature, or any of those little minifigures sold in a capsule for 97 cents in the Walmart action figure aisle.  Still, there's some decent details here. Babs is wearing her New 52 outfit, and you can actually see the armored look of the body suit on her thighs and torso.  She's in a cool fighting pose with her cape flowing out behind her.  The face is way too tiny to see any real detail, but her hair looks nice.  The paint on the figure isn't bad for the scale; the boots, belt, gloves, and bat emblem on her chest are a metallic gold while the interior of the cape is a bright purple, though the edges separating the inside and outside of the cape are quite messy.  I can't tell if the hair is straight red with the black of the plastic showing through or if her red hair was given a wash, but it works since it looks just like her hair on most of the cover art.  The face is painted on, but looks a little silly up close. It's simply a smiley face and two googly eyes. The lettering on the base is neat and legible.  While the figure doesn't come with any accessories, it did come with a card that details the character's abilities.
Overall, this was a neat little addition. I only paid about $2 (and got free shipping) to order her, and I think she's worth that.  I've always loved minifigures (I probably spent more time playing with my Star Wars Micro Machines miniatures as a kid than I did playing with the Kenner figures) and it's cool to have Batgirl represented in a smaller scale in my collection now.  She's easily a Good and a 1/2, with her paint bringing her down a bit. 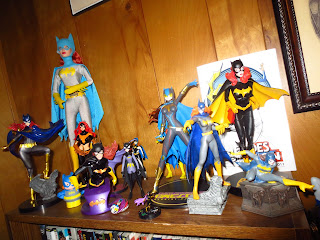 I own tons of Batgirl stuff, but the only Batgirl stuff I've looked at on the site is the DC Super Friends Wheelies Batgirl by Fisher Price. There's quite a few new statues coming out this fall, all of which I have preordered through Big Bad Toy Store.  I'll be reviewing all of them when I get them.

Does Barbecue17 own everything Batgirl related? Not everything. Not yet.  He does have quite a bit of stuff though, some of it on his Flickr account.