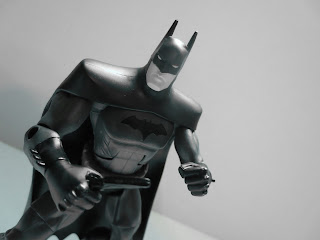 I haven't actually seen any episodes of Young Justice.  While most TV shows are getting easier to watch (via services like iTunes and Amazon Prime, it's easier than ever to keep up with shows I watch like Doctor Who and The Walking Dead), I still find that the hardest shows for me to watch are the shows targeted towards kids. Now that Young Justice is more readily available, I think I'm going to have to play catch-up.  This seemed like a show that really should have done well. It had a wide and diverse roster of new and familiar DC characters, it appealed to both kids and older viewers, and Mattel was supporting it with a pretty cool toy line in two scales.  Of course, since it was being shown on the Cartoon Network, we should have known it would die a quick death, as do most of the really good shows they get that aren't homegrown, Cartoon Network properties. Thundercats? Masters of the Universe 200x?  I'm sure readers can name more.  Anyways, I never did pick up any of the Young Justice figures, but when I saw this Young Justice Invasion Batman, I knew I had to have one. (Young Justice Invasion was the title for the second season of the show).  That Batman himself is quite good, but his display base and accessories are even better. Let's take a look at Young Justice Invasion's Batman, after the break..... 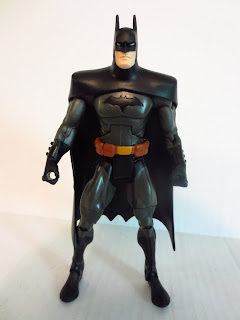 Batman's right around 6 1/2 inches from the soles of his boots to the tips of his ears.  While he features quite a few new pieces, there is still a lot of reuse from Mattel's DC Universe Classics (DCUC) line, and he's built the same as those figures.  While the style of the head is somewhat animated, being based on the cartoon, I really don't feel like he'd stick out too poorly if you wanted to this Batman alongside your DCUC collection.


Since he's built from DCUC parts, he has standard DCUC articulation. Batman has: hinged ankles, hinged knees, swivel thighs, h-hinged hips, a swivel waist, a hinged abdomen, ball jointed shoulders, swivel biceps, hinged elbows, swivel wrists, and a ball jointed head.  Due to the way that the cape lays over the neck and shoulders, there's very little movement in the head. Otherwise, everything works fine. All the joints are tight. If you've ever picked up a DCUC figure, you'll know what to expect.  Because of how the cape drapes around Batman rather than jutting out from the rear like most DCUC Batman figures, you shouldn't have a problem getting this figure to stand up properly. 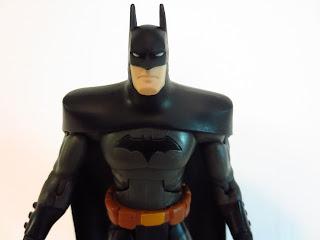 This might be one of my favorite Batman sculpts Mattel has done.  While the upper arms, legs, and crotch are reused from previous figures, everything else is new.  The head is good. It's a very minimalistic animated Batman, but it fits. The draped cape over the shoulders doesn't just improve balance: it's a great look for the Dark Knight.  The chest piece is new and features the bat symbol sculpted in to the chest plate. There's a little bit of muscle sculpting on the torso, but when you look closely, you can see detail lines as well. It's somewhat similar to the New 52 Batman design.  The gloves have short spikes on the gauntlets, but also feature raised edges along the knuckles. Are these capable of delivering some form of electrical current to stun an enemy, or do they just make his punches hurt more? You decide!  The utility belt is a utility belt, although it has the more modern accoutrement of larger pouches on it than the older capsule look. Lastly, check out the sides of Batman's feet. His boots actually have some really cool little details on the side. Mattel could have easily just reused one of the Batman figures they had lying around for the Young Justice line, so I'm very impressed that they went to such great lengths to deliver a very new figure. 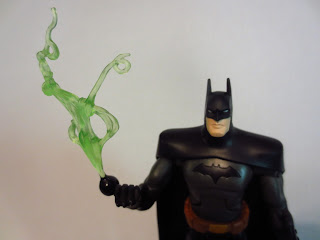 Batman's an easy fellow to paint. Just black and gray, right?  Well, yes, but Mattel does add a few nice extra details.  First, the grayish plastic that the main body is molded in has the appearance of armor rather than spandex, due to the addition of some type of glitter in the plastic. Don't panic! Batman's not going to be substituted for a disco ball; it's simply enough of a shine to make this look more like molded armor versus material.  It looks great.  The black on his cape, gloves, trunks, and boots is definitely black, but applied very cleanly.  The utility belt is still yellow, but it almost comes across as more of a leather like material due to the more mustard-yellow used in molding the belt. The buckle is a metallic gold paint app.  The only problem I have on my figure is a little bit of paint bleed from the face to the cowl. Not a big deal, and probably a one-off mistake. 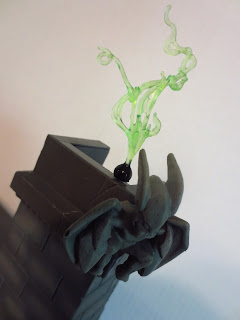 So, time for the main event: accessories. While he only comes with four accessories, they just may be worth the price of admission alone. Oh, and one of the accessories is a building. Did I mention that?  Like all of the other 6 inch Young Justice figures, Batman comes with a large display stand, and his is a rooftop scene. 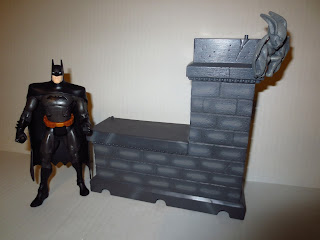 Standing just about 7 1/2 inches tall at it's highest point, the rooftop is the perfect, fairly nondescript building to pose any Batman figure on.  It's well-sculpted with various dents and cracks in the bricks that make up this particular structure, and an ugly little grotesque sitting on the ledge of the upper part of the roof.  The piece is hollow in the back.  On top, it has two foot pegs: one on the lower level and one on the upper level. These are great for holding Batman in various brooding poses, or for holding the next accessory that comes with this set: a gas grenade.  The gas grenade is simply a rounded black object with a hole on the flat bottom which lets you either finagle it over Batman's thumb, or firmly attach it to one of the foot pegs on the base. What's even cooler about this piece is that it is not just a simple gas grenade, but it has a cloud of smoke dispersing out of the top.  It's molded in translucent green plastic, and kind of looks like ectoplasm (or snot).  I assume it's some kind of gas, though, as if it were a smoke grenade, wouldn't the cloud be gray or clear? It actually reminds of the ectoplasm from the film The Legend of Hell House, or the way that Johann Krauss from Hellboy can project himself in an ectoplasmic cloud.  Last, but not least, Batman comes with two batarangs.  Two.  They're nice, sturdy batarangs, and fit easily into Batman's right hand.  Like I mentioned at the beginning, this guy is worth picking up for the accessories alone. They all can add a great deal to your Batman display, and the rooftop display base looks good with a wide variety of figures, even smaller ones. 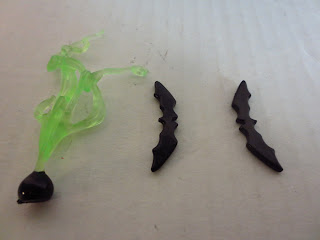 Young Justice Invasion Batman is easily one of the best Batman figures released. Not only does it have some terrific accessories, and a detailed display base, but it manages to offer a unique and very solid version of the Caped Crusader.  He's going to be tough to find, as he was part of the fourth wave of Matttel's Young Justice line, and waves 2 and 3 barely got released. Still, if you like what you see and are able to track him down, you'll be happy. I'm really trying to consider any weaknesses with this figure, and the only ones I can come up with are the H-hinged hips (I just have never been wild about them) and the limited ball jointed neck. That's it. I'm going with a Great and a 1/2 on this Batman. Throw this guy on your shelf, pose him with your favorite villain dangling from Batman's hand off the roof ledge, and you'll have a great centerpiece for your next Batman party. That's a thing, right? People other than me and Brad have Batman parties, right? 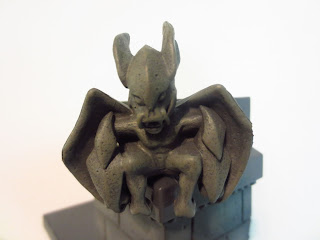 We've covered Arctic Shield Batman from Mattel's Batman line, Talia al Ghul from DC Collectibles' Arkham City, Planet-X Batman, The Dark Knight Returns Batman and Injustice Batman from Mattel's DC and Batman Unlimited lines, Laughing Gas Joker from Kenner's Legends of the Dark Knight, and the Dark Knight Rises Bane from Hot Toys.  Big Bad Toy Store is currently sold out of the Young Justice Invasion Batman, but they do have a few other figures from the line such as Sportsmaster and Red Arrow, both  of which feature wicked cool display bases and accessories.

Does Barbecue17 own everything Batman?  Not everything. Not yet. But he has quite a bit, which you can see on his Flickr page.