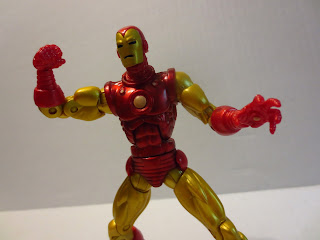 Hasbro's 1/18th scale Iron Man 2 line was really a fantastic movie tie-in action figure line.  Sure, it had some problematic issues, such as shelves being clogged with tons of Iron Man variants, never releasing the un-helmeted versions of Tony and Rhodey, or the Black Widow figure, making certain figures incredibly hard to find, and not even releasing the movie's major villain until much later in the year, but still each and every figure was genuinely a really cool toy. We got some decent concept armors, great film-accurate versions of each armor, and some cool comic figures.  The movie version of Iron Monger still sits on my desk at work because he's such a fun, well done figure.  Unfortunately, things changed at Hasbro and I personally felt the Thor, Captain America, and Avengers lines were all very lackluster.  Now it seems that Hasbro has moved away from offering movie figures in the 1/18th "Marvel Universe" compatible scale and have opted for a very budget conscious line of figures that move at the big five. Fortunately, they've also released a Marvel Legends tie in line that features three versions of Iron Man, two villains, and Rhodey (along with an Iron Monger Build-a-Figure). Today I'm looking at Classic Iron Man.  Suit up and join me after the break......


Classic Iron Man has been released a few times before in two different 2-packs, so some fans already own this mold.  This one's a lot shinier than the others, though.  He's built like a pretty standard Marvel Legend so, there really aren't any surprises here.  He'll look decent next to any of your other comic-based Marvel Legends figures, although he is a bit thin. 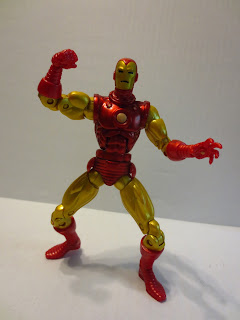 Iron Man has pretty standard Marvel Legends articulation: ball jointed ankles, double hinged knees, swivel thighs, ball jointed hips, a swivel waist, an abdomen hinge, ball jointed shoulders, swivel biceps, double hinged elbows, ball jointed wrists, a hinged neck, and a ball jointed head.  Every point of articulation works well, although I still don't like the thighs on most Marvel Legends figures (I think it's how they put the thigh swivel so close to the hip ball joint).  The thighs are hindered a little by the discs hanging down on Iron Man's side, but it really isn't too noticeable.  The neck and head joints are great because they allow you to put Iron Man in a nice flying pose--still something Mattel hasn't accomplished on a Superman figure. (Editor's note: Seriously, Mattel??)  The knee, elbow, and ab hinges all seem to have "teeth" in them that help lock the joint into place.  While this can inhibit some poses mildly, it does allow the figure to hold poses more solidly and to prevent looseness in the joints over time. The ball jointed wrists are great and allow for a wide range of expressive movement.

I don't own any of the previous releases of this figure, so he's new to me.  That being said, the first thing that strikes me is how thin he is.  I know Tony has always been on the cutting edge of technology, but this looks more like a guy in a standard superhero costume than a suit of armor. Well, at least parts of the chest, the legs, and the arms do.  If you put him next to another Marvel Legends figure, you'll start wondering just how small Tony Stark actually is.  I get that the armor is supposed to be sleek, but it needs a bit more bulk to believably fit in alongside other figures in a similar scale.  The muscle work is all nice and detailed, and the bands of armor on the waist, hands, and boots definitely hearken back to the silver age of comics.  Iron Man comes with two portraits, one with the classic helmet and the other with the "horned" face mask. They both look nice and comic-accurate. I particularly like how the grating over the mouth on the "horned" helmet looks like teeth. Nice. Overall, not bad on it's own, just too thin for my tastes. 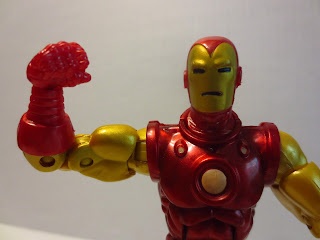 From about 8 inches to a foot away, Iron Man looks to have a really good paint job.  Rather than having a flat yellow and red paint job, this Iron Man has a metallic look to him.  Look at the figure more closely, however, and you'll realize that this Iron Man is made of the same swirly plastic as figures like Ultron and the Iron Monger Build-a-Figure that gives the figure a somewhat odd and discolored look.  Fortunately, the yellow and red are not as bad as Ultron's silver, and overall the shiny metallic effect looks pretty nice.  There isn't much paintwork here, as most of the figure is molded in the appropriate colors, but the features on his mask and some of the small details like the repulsors on his hands are neat and cleanly applied.

While Iron Man doesn't come with any traditional accessories, he does come with the alternate head I mentioned above.  Really, if they had wanted to, Hasbro could have simply released each head as a separate figure or one of them as a chase variant, so getting both in the package is quite a nice feature. In the absence of usable accessories, extra portraits for a figure are always nice. The heads swap very easily (the hands are also easily removed too, so you could probably swap them with other Iron Man figures).  He also comes with Iron Monger's right leg.  I'll be reviewing Iron Monger once I get the entire figure so I'll deal with that later. 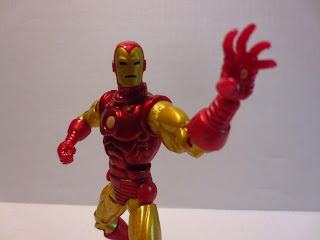 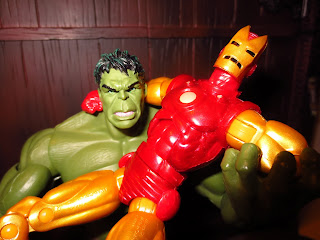 Classic Iron Man is in no way a bad figure.  He definitely captures the silver age look most comic fans think of when they think of Iron Man.  He's also well articulated and features an additional portrait along with the build-a-figure piece, so you are getting some nice extras with him.  The paint job's pleasing, if not perfect. Overall, I just think he looks out of scale with other Marvel Legends figures. He's a good Iron Man figure, but not a great or Epic Iron Man figure, so that's what he gets: Confirmed: Good.  If you want a good silver age Iron Man, this isn't bad.  I guess I'm just more of a fan of the bulkier looking armors.

This is the third figure in this series I've reviewed, as I've also reviewed Iron Patriot and Ultron. Click on the Big Bad Toy Store banner above and you can order this or any other Iron Man 3 figures from their store.