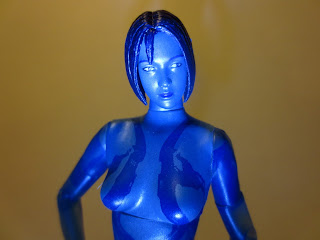 I haven't bought a new McFarlane figure in quite a few years. Sure, every year when October rolls around and all my thoughts start turning to scary things, I usually snag a few older Movie Maniacs or something to fill some holes in my horror collection, but it's truly been a few years since McFarlane has produced anything that's interested me.  I think the last thing I bought from them was the Alamut Gate from the Prince of Persia line sometime in 2010. I got back into Halo a few months ago after borrowing Halo 4 from a friend, and found myself browsing the Halo figures every time I was at the store.  While they're nice looking, they're just in such a weird scale that's different from most everything else on the market. Cortana interested me, though, because since she's a holographic AI construct, she could technically be in any scale you want her to be in.  I'll say more after the break... 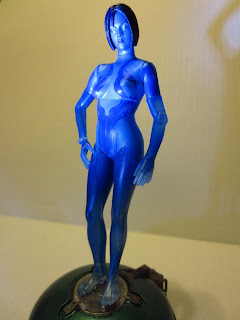 Cortana measures in at just a little over 4 3/4 inches tall, which puts her in scale with few other modern action figures.  As I mentioned above, since she's a hologram she technically could be in any scale, but the scale is one of the biggest complaints I have with modern McFarlane products. Their Halo and Walking Dead products might be appealing, but they're not in scale with any other modern lines I collect.  As is, the fact that she can be flexible in terms of scale is the only reason I snagged Cortana.  While she isn't sculpted in a hyper-realistic style, she isn't exaggerated or overly stylized.  McFarlane did do a good job of capturing the "digital" look of not just the character, but the source material as well, as Cortana looks like an in-game character model. 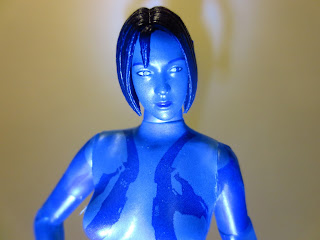 It doesn't take long to realize that Cortana is pretty much intended to simply stay in one or two simple poses.  Her articulation is pretty minimal: swivel hips (she's rocking a V-crotch like the old Playmates Star Trek figures), a mid torso swivel, swivel shoulders, bicep swivels, hinged elbows, swivel wrists, and a swivel neck.  While I love articulation in action figures, this is one of those instances where I really think the figure would have been better off if McFarlane had chosen to do away with all articulation other than the arms and head.  The hip and mid torso joints serve no purpose and detract from the look of the figure.  Cortana is molded in a bit of a pose and requires the use of a stand to stand up properly, so the leg swivels don't add anything.  While the upper torso joints work OK, Cortana starts to look awkward if given any other pose other than her default stance. This might sound odd, but a non-articulated figure with maybe a ball jointed head would have been so much better. 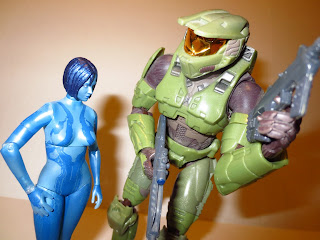 The sculpt is a really mixed bag, but then again Cortana is a somewhat unique character to replicate in plastic. She's a hologram, so for the most part McFarlane has made her body perfectly smooth with no texture. She still has a very feminine look to her, and that's captured well via her various curves. Her fingers and toes are captured well.  The head sculpt isn't bad, either. It definitely is recognizable as Cortana in her Halo 4 incarnation, although I think the face should be rounder. Cortana's one of those characters whose look has evolved over time and who, like Dana Scully, just kept getting hotter. Too bad her head seems to be in a permanent downward look, which seems a little odd. Maybe this was done so that she could look at a regular sized character while she's standing on the base? Other than that, my only problem with the sculpt is the way that the joints impede the graceful beauty of the character. 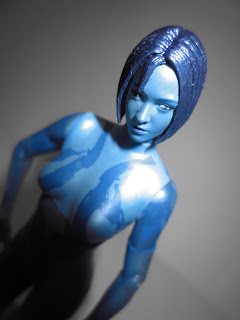 Cortana seems to be mostly molded in a cloudy blue translucent plastic, which really goes a long way towards helping to replicate her holographic look.  There are a few different shades of blue that help add some dimension to the figure (she's not entirely translucent), and some detailed tampographic prints all over her front and back that give the impression of the "digital" nature of the character. I would have preferred a bit more translucency, but that's just a personal choice.  The face is done well, and the hair is a cool purplish blue. 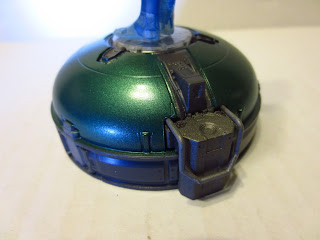 Getting into Cortana's accessories covers some of the biggest strengths and perhaps the biggest weakness of this figure.  Cortana comes with three accessories: a projector base, an extra right hand with an attached "computer" screen, and a Master Chief micro figure.  The projector base is a very nice display stand for the figure. It's a little over an inch tall and features two pegs on top that Cortana can securely attach, although it might take some finagling to get her standing up perfectly straight.  The base has a good amount of detail, including a translucent center, various paint applications, and some technological detailing on the sides. While it replicates the various terminals that Master Chief often inserts Cortana into, it also seems likes something a Master Chief cosplayer could use as a prop of some kind. 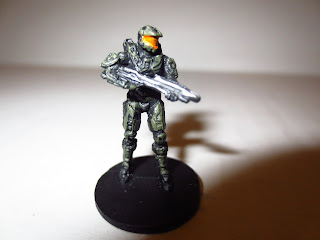 The micro Master Chief figure is actually a cool little accessory. It was thrown in to cross promote McFarlane's miniature Halo line, and for the scale, the sculpt and the paint are quite nice. You can pretend rampancy has affected Cortana and she's grown to gigantic proportions to demolish the city!  The last accessory is a very cool idea, but quality control issues make it function very poorly. In Halo, Cortana is often depicted as bringing up various computer screens, so McFarlane has chosen to replicate this by giving Cortana an additional right hand that is attached to a flat, translucent plastic computer screen. It has a blueprint of Master Chief's armor on it along with various charts, graphs, and the UNSC logo.  The problem comes with switching hands. The first time I attempted to swap Cortana's right hand with the computer screen hand, the right hand's peg broke off inside the figure's arm.  With a little work with my dremel and some hot glue, I'm able to attach the regular hand permanently to Cortana, but no one should have to fix their toys for attempting something they're supposed to do right out of the package.  Remember, these toys are being sold in the main action figure aisle of stores like Target and Walmart, so kids are most likely grabbing these as well. 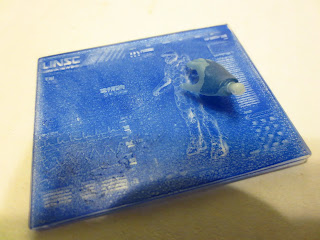 I really wanted to like this figure, and looked forward to adding it to my collection. Unfortunately, the awkward and ugly articulation, weird downward head pose, and breaking wrist joint definitely decreased my satisfaction with this figure. I try to judge every figure based on what it is and what it probably should have been. For example, I'm not going to knock this toy for not having multiple ball joints or a plethora of weapons. I will say, however, that I think this figure would have been so much stronger as a more solid figure with less articulation. The sculpt should have been the focus here. And when toys break right out of the package, I'm never happy.  I'm ultimately confirming Cortana as an Eh figure. If you really need a Cortana for your display and are willing to leave her as is or do a little fix, she's not a complete failure. But she only avoids being one by the skin of her digital teeth. 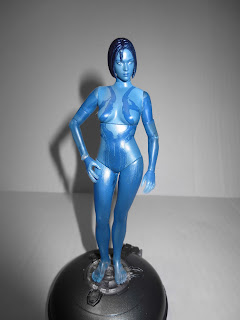 I haven't reviewed any other Halo figures, but I have reviewed plenty of other video game based figures.  Check out my reviews of: The Marine from Quake 2, Chell from Portal 2, Elizabeth from Bioshock Infinite, Talia al Ghul from Arkham City, Batman from Injustice: Gods Among Us, Zelda, Link, and Ganon from The Legend of Zelda: The Ocarina of Time, and Lara Croft from the Tomb Raider: Survival Edition.  If you click the Big Bad Toy Store banner at the top of the site, you can order this Cortana figure or a number of other Halo figures from their store, including the superior Halo Anniversary Cortana. They have some great sales going on, so check them out!