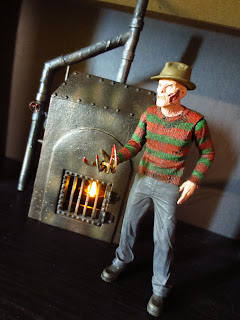 While I love horror movies, I'm not the biggest fan of slasher films. Still, I do enjoy the various boogeymen from those films, and I certainly see the charm in A Nightmare on Elm Street.  Using a charismatic protagonist, dark humor, surrealist dream worlds, and some classic good versus evil scenarios that do elevate the films above the level of simply watching teenagers get killed,  the Nightmare on Elm Street franchise has succeeded, and it's star, Freddy Krueger, has certainly cemented his place in the pantheon of horror icons.  NECA has released some fantastic figures based on many of the Elm Street films, but today I'm looking at something new and a bit different: Freddy Krueger's Furnace. It's a diorama piece of the old boiler room from the condemned power plant that you can use as an excellent backdrop for your various Freddy Krueger figures, or really any horror figures you have. NECA seems to be really exploring this concept (check out their Predator 2 Trophy Room), and is putting out some great product at a decent price.  1-2, better read my review....after the break, of course! 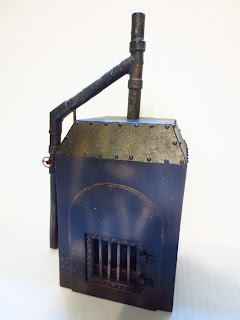 The main body of the furnace is between 6 and 6 1/4 inches tall, 4 1/8 inches wide, and 4 1/2 inches long.  Factor in the pipes (which aren't removable) and it's about 10 inches tall and 5 1/2 inches wide.  The style is incredibly realistic, and will serve as a great backdrop to any other realistic figures you might have. While 7 inch figures are about as tall you'd probably want to go, I imagine this piece would still work great with 1/18th scale figures.

Since this is a rotocast diorama piece, there really is only one moving part: the door to the boiler itself is hinged, and can open and shut easily and safely. I don't think you'll have to worry about breakage here unless you're really rough with the piece.  I kind of wish the valve on the side of the pipes turned, but it doesn't. It's simply one solid piece. 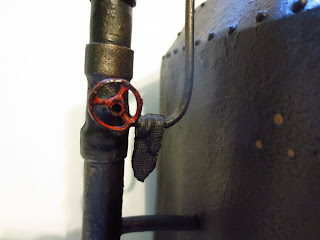 NECA went with rotocast pieces for this, which probably wasn't a bad idea. It's a big, hollow structure, so rotocast was probably quite cost-effective.  The furnace really has a variety of detailed textures to it that do replicate an old metal furnace. You can run your hand over it, and feel the texture. Plus, since it's plastic, you don't have to worry about tetanus.  The top of the furnace and the grate are both covered with bolts to complete that creepy, industrial vibe.  The pipes coming off the sides are well sculpted, and even contain a valve, a strand of material someone tied around one of the pipes, and all of the various pipe fittings that keep the tubes together. The only complaint I have is that the lower plastic pipe that connects to the side of the furnace is bent, and thus the main pipe extends a little off of the ground. I hope that in time (or with a little help from a hairdryer) I can get this back down to where it is supposed to be. 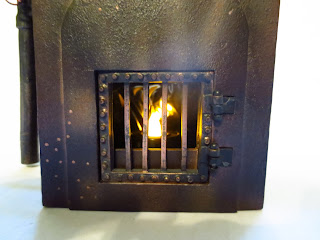 This is one of those pieces that you're going to want to touch as soon as you see it to convince yourself that it isn't metal.  While it's molded in a brownish black plastic, there are various paint applications that help to further portray this piece as a rusty old hunk of metal.  Various dry brushes across the surface help to signify the aging of the metal, and there's even a few rust speckles thrown on for good measure. These actually could have been done a little better, but from a distance they're OK. The valve on the pipes on the side is painted red, but has an appropriate weathered look to it, as well. While there isn't much "fine detail" to talk about, overall the piece does look convincingly like it's film counterpart. 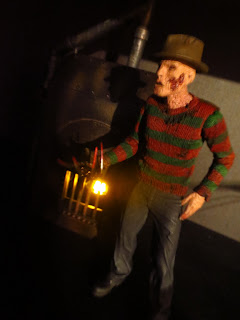 The furnace doesn't have any extra pieces with it, but it does have a rather cool action feature: a working LED light inside the furnace.  Underneath the display is a switch (and the battery cover) allowing you to turn on the interior light.  The led glows an eerie yellowish orange and flickers a bit.  The rear interior of the furnace is covered with a reflective material that amplifies the light and gives the furnace even more of a glow.  This is a great feature, although I do wish that NECA had chosen to sculpt something a bit more flame like for the bulb, as the bulb we have simply looks like a battery operated tea light.  Still, when you start taking pictures of this and using it in a diorama, you'll be thrilled. 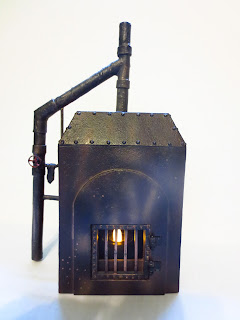 I love the idea of having smaller diorama pieces like this to really make displays and photographs pop.  This is a great diorama piece. It's got a few issues (I wish the light in the furnace was a little better, and that my rotocast pipe wasn't bent) but overall I look forward to adding this to my horror shelf and using it in a variety of photo dioramas (so don't be surprised to see it popping up frequently on the site). I'm going to give this product a Great. It's a terrific concept that has been executed quite well. It retails for $50, but I only paid $40 for it at Big Bad Toy Store, so at that price it's an even better value. I actually only own two A Nightmare on Elm Street figures: the McFarlane Movie Maniacs Freddy Krueger and the NECA Freddy Krueger from the remake. Sounds like I need to hunt around and pick up a few more.

I haven't written any other A Nightmare on Elm Street reviews, but the Reel Brad Bell did an excellent video review of the Freddy Kruger Premium Format Figure from Sideshow Collectibles.  If you want either the statue or the boiler room, grab them from Big Bad Toy Store either via the banner at the top of the page or through this link.

Barbecue17 plans on using this furnace with his custom made Home Alone action figures, hereby making this furnace a Christmas toy. Christmas themed toys are allowed to be displayed in the living room throughout December. (Editor's note:  That's what he thinks...) Oh yeah! Check out more cool stuff on his Flickr account.