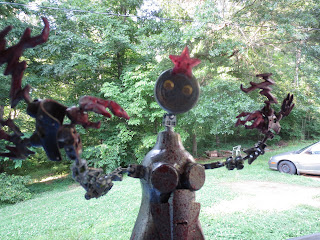 I've reviewed two of Rupert Valero's other cool creations here and here so I'll skip the introductions and get right to the meat and potatoes. Valero makes some cool stuff and while he's been really doing some great custom action figures, the first piece of his that I ever saw and the first piece I ever purchased were assembled from random pieces of junk and Lego Bionicle parts.  That's what the Tiara Assassin is made from and while you may balk at the idea of an action figure made from those things, let me assure you that the Tiara Assassin is a groovy toy.  Seriously, she's the kind of thing that nightmares are made from. Don't believe me? Then see for yourself after the break.....


Remember, this is a one of a kind creation and not a mass produced item, so while I'm using the traditional categories and terms, they don't always apply perfectly.  As mentioned above, Tiara Assassin is a robot like assemblage piece made from a variety of recycled items.  The main body looks to be composed of a dish soap bottle while the various appendages are made from what appears to be Bionicle parts.  She stands just under 15 1/2 inches tall.  It's tough to figure out where she might fit in with a collection, but honestly she looks fine just on her own. 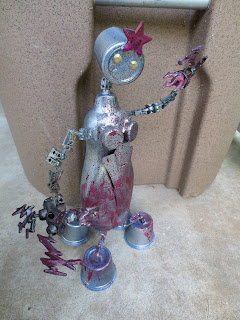 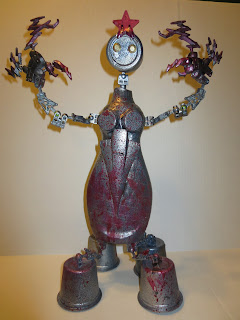 Since this is an assemblage piece, there isn't any "sculpting," so I'll simply critique the parts selection chosen.  The four bases that the Assassin sets on are made of some type of plastic cup (like a little applesauce or fruit cup). They look cool but if not positioned correctly can lead to the robot toppling over.  The Bionicle parts used for the limbs are sturdy and have a nice futuristic feel, especially the very wicked claws and blades on the wrist.  They're really creepy looking.  The body is a rounded bottle of some kind which gives the Tiara Assassin a more feminine appearance. Coupled with the various pieces attached to the bottle that give the robot the appearance of a stomach and breasts and you have a sinisterly feminine creation.  The head appears to be made from a vitamin bottle and has two flat eyes and a translucent pink star on top of its head.  It really is a very creepy art project and an interesting character.  You can almost hear GLADOS' voice coming from this thing. 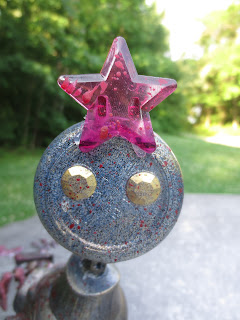 I've always been really happy with the paint jobs that Valero puts on his creations, and in some ways the Tiara Assassin might be the most impressive.  While most of the body is painted a dull silver with black speckles, the figure is drenched with a very impressive blood spatter effect.  The claws, torso, and bases are all covered with a disturbing amount of red paint. It's a very convincing effect!  Definitely not something that the kiddies are going to be comfortable having on their toy shelf, that's for sure.


Tiara Assassin has no accessories, but with these giant blades on her arms, does she really need any?   They are removable and articulated. 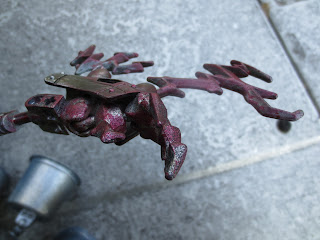 Overall, I'm quite pleased. This is a piece that can just stand alone in my collection and is sure to garner many questions about her existence.  Valero did a smashing job of taking some friendly and feminine elements such as the gem shaped eyes, the feminine body, and the pink star tiara and juxtaposing them with the claws and blood splatter to make a very disturbing. It's truly a nice art piece that I'm glad to have in my collection.  This isn't a mass market toy nor a plaything, so I'm going to confirm her Great.  Fantastic design, impressive paint, and just a creepy presence that can't be denied.

Once again, you can check out my reviews of two other Valerobots: The Assemblage Juggernaut and the Assemblage Zombie. 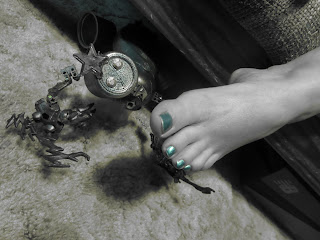 Barbecue17 is proud to have the Tiara Assassin in his collection. Locked in a cabinet that's locked away in a spare room.  Behind an iron door. The thing kind of freaks him out. Check out more of his pictures on his Flickr account.