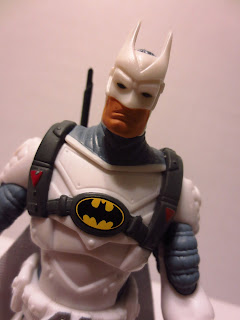 Everybody freeze while we take the Action Figure Time Machine back to 2003.  Currently Mattel offers Batman figures in three lines in the 6 inch scale: DC Unlimited, Batman Unlimited, and through their Club Infinite Earths line.  Before that we had a line called Batman Legacy.  Before that, Batman figures were folded into the massive DC Universe Classics line. Before that we had DC Superheroes, which only gave us characters from the Batman and Superman comics.  And before that, in 2003, Mattel had a line that was simply called Batman.  Intended mainly for kids, the line focused on the "multiple Batmans" approach that Kenner had perfected.  Sure, there was a villain or two in the line, but most of the figures were of Batman.  Today I'm looking at one of those versions of Batman: Arctic Shield Batman.  Is he a cool variant, or should you just leave this figure on ice?  Read on to find out after the break.........


Arctic Shield Batman was released in 2003 as part of the second series of Mattel's Batman line.  Coming in around 6 1/2 inches from the soles of his boots to the top of his pointed ears, Batman really is about the same size as most modern Batman figures from Mattel.  While the articulation is different and the figure might be just a tad thinner than the beefier sculpts we got with DCUC, I don't see any reason why Batman wouldn't fit in with the rest of your Mattel DC figures.  He definitely feels more like a larger Kenner 90's Batman than a modern Mattel Batman figure, but I think he adds some nice variety to a Batman shelf. 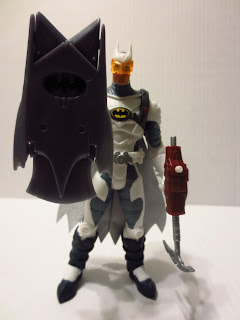 Toy Biz's super-articulated Marvel Legends toyline had only been out for about a year at the time of Batman's release, but Mattel hadn't yet started releasing figures in the super-articulated style. The focus for this Batman line was on cool outfits and nifty gadgets. Still, AC Batman does have some decent articulation when compared with many other lines of the time period. He has hinged knees, swivel hips, a swivel waist, ball jointed shoulders, swivel wrists, and a swivel neck.  Like I said, not super-articulated, as this figure was built more for play rather than posing. Still, the wrists and ball jointed shoulders are a nice touch that offers the figure some ability to be posed in an interesting way.  All of the joints are nice and solid with no QC issues. 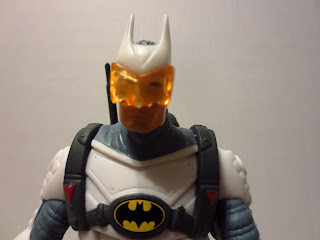 Although the face is somewhat minimalist in detail, I really like the multiple sculpted details of Batman's outfit.  While the various Kenner Batman figures often simply gave Batman a new paint job to signify an environment-specific costume, this Batman truly looks as if he's wearing an outfit appropriate for cold weather operations.  The boots are really nice with multiple straps (like ski boots) and a cool blade on the back.  It even looks like he has some heavy duty treads on the bottom (complete with a batsymbol imprint on the sole).  The undersuit is thick and padded to provide appropriate warmth while the exosuit is very sleek and looks to be made of various plates of armor.  The utility belt has a nice assortment of varying pouches and a cool bat shaped belt buckle.  Look close enough and you can even see where it would hypothetically snap together.  Across his chest, Batman has a really cool gray harness that compliments the included backpack accessory (more on that in a bit!).  He has a cloth cape that's folded in a neat way so that it bunches up in the middle, giving it a layered look. Overall, the whole outfit is a unique look that is believable as something Batman might wear should he need to operate for a sustained period of time in Arctic conditions. 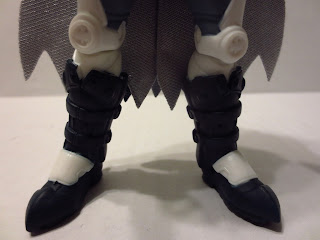 There's not a ton of paint work on this figure, but I can't complain about the color choices of what's there. I will say that there is a lot of slop on the boots and even a little slop on the edges of the harness, as well.  The bat symbol on the harness is neat and clean, however, and there are a few interesting details like the silver belt buckle, the red details on the harness, and the gray eyes. 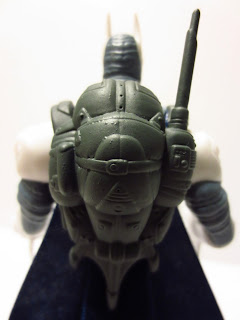 While I really like the design of the outfit, Arctic Shield Batman's accessories are also a very worthy addition to this figure.  While they're a bit fantastic, they manage to avoid being over the top and worthless.  First, Batman comes with a very cool set of orange translucent goggles that fit over his eyes. They slide easily into place and while they're a bit loose for play, they look fantastic on the figure. Next, Batman comes with the titular arctic shield.  It's a gray shield with the batsymbol across the front, a handle Batman can easily hold, and some nice rounded blades on the sides.  Why drag around a shield, though?  Well, unfold the top half of the shield (that looks a bit like Batman's cowl and eyes), slide down the handle, and the shield becomes a snowboard. It actually looks pretty cool and seems somewhat practical. There's a peg that Batman easily attaches to. 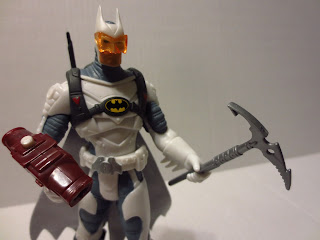 Finally, there's an ice ax launcher.  The missile is a pretty standard silver ice ax, which can fire fairly far from a maroon launcher. The launcher and projectile are not at all oversized, and while you may doubt the usefullness of the gadget, the usefullness of the ice ax itself seems pretty likely. Ignore the grooves on it, and the ice ax itself makes a pretty decent accessory.
This was very much an impulse buy. I was at a comic shop and saw this guy for $9.99. I love collecting 6-7 inch Batman figures and love arctic themed toys, so the purchase of this item seemed like an excellent idea. I'm not at all disappointed. While the articulation and paint don't hold up as much today (although I'm sure the articulation was a bit more impressive in 2003) the sculpt and accessories are still pretty cool.  If you're looking for an arctic themed Batman to help fight your Mr. Freeze figure, this is a great choice.  I fondly remember getting an arctic themed Batman from Toys R Us the morning my dad took me to see Batman Returns, and thus I've always had a fondness for the character in cold weather garb.  If you're looking for a different colored Batman for your shelf that isn't too over the top or ridiculous, shop around for Arctic Shield Batman. I have no hesitation confirming him a Great figure. 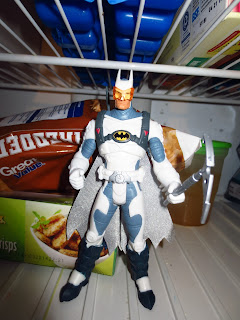 I haven't reviewed any other figures from Batman (2003) on here, but I have reviewed plenty of other Batman figures from Mattel such as Planet-X Batman,  The Dark Knight Returns Batman, and the Injustice Batman.

Despite his deep and abiding love for Arnold Schwarzenegger, the fact that it contains both Batgirl and Poison Ivy, and the prevalence of ice themed jokes in this review, there's still no way in the world that Barbecue17 will re-watch Batman and Robin.  He does other stuff with toys on his Flickr account.