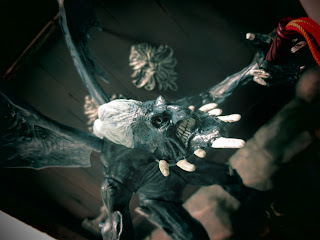 Prior to the release of Peter Jackson's adaption of The Lord of the Rings: The Fellowship of the Ring, finding merchandise based off of the works of J.R.R. Tolkien wasn't an easy task.  There was a small toy line available from Knickerbocker based on the 1978 Ralph Bakshi adaptation of The Lord of the Rings, but that was about it.  I've mentioned many times before that beginning around 1997, the action figure industry entered a period where no property was off limits, and we saw companies really beginning to take on some unique licenses. It was a small company called Toy Vault that was started in 1998 to release toys based on the works of J.R.R. Tolkien and Lewis Carroll.  Using the descriptions found in Tolkien's books and the interpretations of many different fantasy artists, Toy Vault's Middle Earth Toys began releasing figures based on those classic works.  While they had some lofty goals (the packaging proclaims over 40 figures were planned), only 27 figures were released. While that might seem like a lot, the majority of the figures were variations based on eight different characters and/or molds.  Today I'm looking at the Shadow Balrog, one of the variants of the Balrog that was released in 1998.  Fly, you fools, to more reviewing after the break.....

Scale is kind of tough to determine here.  Toy Vault was very forthcoming in proclaiming that scale was very important in creating this line, and the back of the package states, "Made to scale of one foot to one inch." That's all well and good and would seem to put the Balrog in a 6 inch scale. The Balrog comes in right at 5 3/4 inches from the bottom of his feet to the top of the tuft of hair on his head, but it's tough to tell he'd actually be as he is sculpted leaning forward and with his legs somewhat bent.  Not sure how tall that would really make him.  His wings make him even larger and more imposing, as they extend up to 9 inches from the ground.  I think most people are going to immediately react, "Isn't this a bit short for a Balrog?"  If you're automatically comparing it to the Balrog in Peter Jackson's The Fellowship of the Rings, then yes. Based on various descriptions from both Tolkien's trilogy and The Silmarillion, though, it actually seems right on target, although whether or not the Balrog possessed literal wings is still debated.  The style for the figure is a bit on the caricatured side, representing a different style of fantasy art than the typical high fantasy or swords and sorcery are we often see. While this guy isn't going to blend in with your Toy Biz Lord of the Rings collection,  he does look like he would fit in with the Rankin/Bass version of The Hobbit. 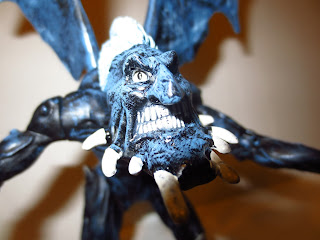 The Shadow Balrog doesn't have a ton of articulation, but was probably pretty average for the period.  He has swivel hips, swivel shoulders, hinged elbows, swivel wrists, and swivel wings.  While the wings and the hips are really just jointed so that you can put the figure into a decent standing pose, the arms feature a decent range of motion that will allow for a few fun poses.  The wings come detached in the package, as does the tail, and need to be attached.  Be careful in doing so, as it takes a bit of pressure to get them into place.  Otherwise, most of the joints seem nice and solid.  For being such an oddly built figure, he does stand quite well without the need of a stand.
Designed and sculpted by illustrator and painter Daniel Horne, this is definitely not how I envision a Balrog, but I will say that I find it difficult to get the version presented in Jackson's film out of my head.  The body is sculpted with lots of twists in the body and exposed bones/claws/whatever.  The feet look like hooves, and the lower spine is covered with spikes. If there's a weakness, its the head.  It's charming in and of itself, but not terrifying.  I do like the asymmetrical spikes on the jaw, however.

Toy Vault offered various repaints of the figures in this line, and this version is called the Shadow Balrog.  Other versions released were The Balrog of Khazad-dûm, an Earth Balrog, and a Fire Balrog. The Shadow Balrog says that it was a Portal exclusive, but I have no clue what Portal is/was. Anyone else know?  I think the idea of this version is that it represents the Balrog cloaking itself in shadow while hidden in the Mines of Moria.  He's covered in a mixture of blues and browns that does nicely replicate shadows while still looking normal enough if you wanted this just to represent an actual creature.  His various claws, chin spikes, and wing tips have a little ivory on them, but also seem to be covered with some black paint. The style of paint really reminds me of what you would find on a tabletop miniature. It's evocative of the character without being overly focused on technical details. 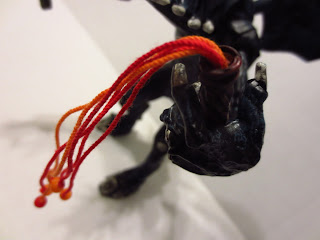 The Shadow Balrog comes with two accessories he can hold: his sword and his flaming whip.  The sword is very nice as it features different sculpts on both sides. One side features a skull of some kind and a series of runes, and the other a wicked set of teeth. There's lots of dings and dents in the blade along with a wash to give it a an ancient feel.  The flaming whip is cool, and is executed in a very interesting way.  While the handle is simply brown plastic with a darker wash, the flaming thongs of the whip are made from red and orange strings with red and orange beads on the end.  It actually looks pretty decent and, allows the accessory to hand down naturally, although I'm not sure how well it replicates the look of fire. 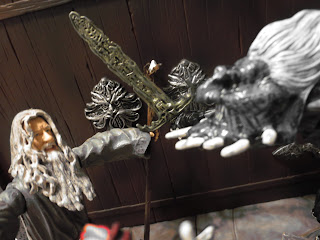 I actually own three other Middle Earth Toys: Gollum the Fisherman, Gimli of the Fellowship, and Galadriel, Lady of the Wood.  While I said earlier that his style doesn't blend in with the Toy Biz figures based off of the films, I imagine I'll still display him with those guys. Despite my not being wild about the design, I do like the figure, and I really think Toy Vault tried to do something really unique with this line. I wish they'd at least gotten to the point where they had released the entire Fellowship (we only ever got Frodo, Gandalf, and Gimli), but if you're a Tolkien fan these are an interesting footnote in the history of that property. Considering the time when the Shadow Balrog was released, I'd give the figure a Good.  It has some weaknesses, but it also manages to be a fairly imposing representation of a great literary monster. Doesn't that sound like a great way to class up your shelf?
I haven't reviewed any other figures from Middle Earth Toys or from Tolkien based properties, but I have reviewed some other toys from the 1990s. Check them out here: The Marine from Quake 2, The Alien versus Predator 2 pack, The Space Marines from Kenner's Aliens, and The Xenomorphs from Kenner's Aliens.

When the new Balrog figure fell off of Barbecue17's shelf, he became Barbecue17 the White. If you believe that story you'll find even more cool stories on Barbecue17's Flickr account.