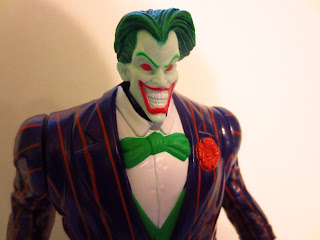 In 1996 Kenner released Legends of the Dark Knight, a new Batman line that shared it's name with the long-running DC Comics series.  Perhaps a spiritual successor to Kenner's earlier Legends of Batman line, Legends of the Dark Knight offered larger, more detailed Batman figures that seemed to be Kenner's attempt to offer superhero toys that could compete with McFarlane's Spawn line.  Running from 1996 until 1998, Legends of the Dark Knight offered a number of Batman and Robin variants, Batgirl, and a number very cool versions of villains like Clayface, Penguin, Catwoman, Man-Bat, Scarecrow, Bane, and of course the figure we're looking at today, The Joker.  Last week at Heroes Con in Charlotte I found Laughing Gas Joker for $5 and knew I had to snag him. He's not only a cool figure on his own, but a great Joker variant.  This is actually only the second Legends of the Dark Knight figure I own (as you can probably guess, the other figure I own is Batgirl). Ready for some laughs? Join me after the break.... 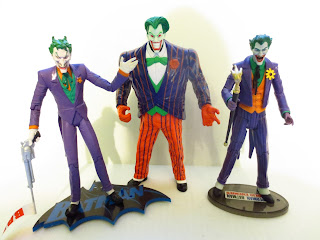 Laughing Gas Joker is right around 7 1/2 inches tall, meaning that he's as tall or taller than most modern DC figures.   This could be explained because this figure portrays Joker in a robotic suit, hence the reason why he's so massive and buff.  That's explainable, but he's not going to fit in stylistically with most modern DC lines.  He's much more animated looking, despite not being based off of a cartoon, so he could fit in OK with the newer Mattel Batman line that's targeted towards kids.  Personally, I'll be displaying him with a grouping of other various Joker figures from a multitude of lines. 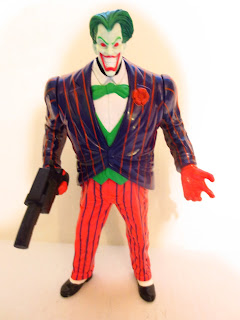 Built around an action feature, Laughing Gas Joker doesn't have a ton of articulation.  The arms on his exterior torso swivel at the shoulders, and he has a swivel neck.  Laughing Gas Joker's action feature is that when you press a button on the back of the figure's waist, the front and back of his torso splits apart, revealing the scrawnier Joker inside holding an explosive device.  Kenner had used this action feature before, as it's similar to those found on the "Exploding" T-1000 from the Terminator 2: Judgment Day line and the Scorpion Alien from Aliens.  Other than the swivel neck, the figure is completely unarticulated. 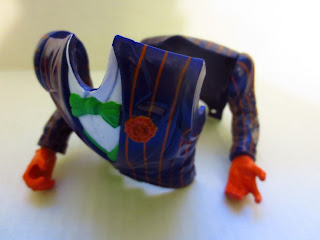 With the exterior torso pieces on, the Joker looks massive and muscular.  He's wearing a very garish tuxedo that looks like it's bulging under his gigantic muscular body.  There's a boutonniere on the left lapel (it probably sprays acid), a messy bow tie, and a vest underneath the jacket. The head's a little small for the body, but  it's intentional for the figure and it's a nice sculpt with a very detailed head sculpt. The proportions (giant smile pointy chin, small nose) are perfect for a comic inspired Joker.  Pop open the torso, though, and you'll see that the Joker head is much more in proportion to his true body. He's tall, gangly, and has his (nonarticulated) arms wrapped around a giant laughing gas bomb.  He's wearing suspenders and has a thin bow tie, one of the ends draping over his left hand.  The laughing gas bomb is composed of a clock with sculpted numbers and the "12" replaced with a "J".  Attached to the clock are four tanks of "Smilex" Joker gas.  The first tank is cradled under Joker's right arm, while the other three are attached to his back.  The "Smilex" name is sculpted into each tank with the front tank even having a smiley face sculpted in. It's a rather unique sculpt, and a very cool concept. 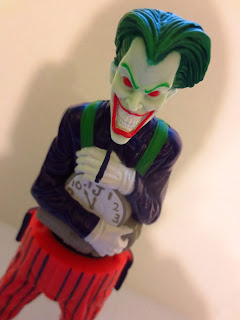 The figure's paint job really reflects the Joker's over the top personality. His suit is incredibly bright: a purple jacket with pink pin stripes and pink pants with blue pin stripes.  The bow tie and vest are green, adding to the garish look of the outfit.  For the most part the pinstripes are neat, although there are a few areas where things aren't quite perfect.  The head is painted well; it's cast in a pale green with bright green hair, white teeth, and bright red lips.  Underneath the false torso, there's still a bit more painted detail. While the "Smilex" tanks are painted entirely grey, the numbers on the clock are individually painted. There's a little mess on the interior body, as my Joker has some green paint splotches on his elbows. Still, overall the paint makes the figure stand out, and isn't that what the Joker really would want? 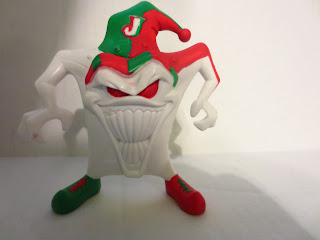 Depending on whether or not you consider the two parts of Joker's torso as accessories determines whether Joker has two or four accessories. The other two accessories in addition to the torso parts are a wickedly over-sized revolver and Wild, a little evil playing card henchman.  The revolver is a really cool piece with some nice sculpting. While it is over-sized, it certainly fits the Joker's personality and the massive body of this figure's robotic armor.  It fits tightly in his right hand.  Wild is the second accessory, and is apparently a little sidekick for the Joker.  The back of the package states, "Wild, the incarnation of the Joker himself, is a disgustingly brutal imp, clever and sneaky, who amuses himself and his master with nasty pranks that are a constant threat to Batman."  I've never heard of Wild before, and I'm not sure what Kenner meant when they said Wild was "the incarnation of the Joker" but I'm more wondering if this guy's relationship with Joker is comparable to Bat-Mite's relationship with Batman.  He's a solid figure with some creepy sculpting and some decent red and green paint that makes him look like a jester.  He does have a few mold issues, but overall is a decent little guy to display with a multitude of Joker figures. 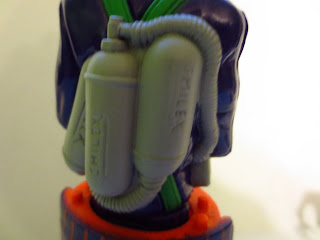 I really wish I would have collected these toys when they first came out (I would have been in Middle School) but was far too interested in Star Wars and Nintendo 64 at the time, although I do vividly remember looking at them in the toy aisles.  This Joker, while unarticulated due to being built around an action figure, is a wildly cool figure. Is he my favorite Joker action figure of all time? No, but is he in my top 5? Quite possibly. He really is a fantastic and unique version of a character who has appeared in action figure form so many different times. Honestly, while the figure's concept is kind of crazy, it does seem like something that the Joker would do. Even if it didn't serve a real purpose, it'd surely get some giggles (whether Smilex was involved or not). Rating this figure as a product of it's time (1997), I'm going to confirm the figure as Great and a 1/2. I really, really like this figure, and imagine 14 year-old-Barbecue17 would have been even more impressed by it.  Once again, I picked this up cheap at a convention and I bet you can do the same or find it cheap from an online seller. It's worth it, especially if you collect Joker figures, and will certainly bring a smile to your face. And that's what the Joker would want, right? 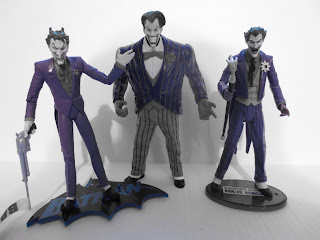 When you press the button on Barbecue17's back, absolutely nothing is revealed but useless knowledge about toys and action figures. Check out more of his stuff on Flickr