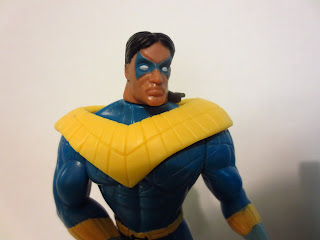 In 1994, Kenner released Legends of Batman, an action figure line that took Kenner's sales model of releasing multiple versions of Batman to new heights.  Coming out during the KnightFall event, Legends of Batman not only included characters from that series (although, strangely, no Bane) but also a variety of Elseworlds variants of the Caped Crusader.  This line was one of the first that seemed targeted towards the growing collectors market as much as it was towards kids. The line featured larger figures with more dynamic, pre-posed sculpts, as well as a Skybox trading card included with each figure. One of the most interesting aspects of the line was that it focused on the idea of the "Legends of Batman," stating that Batman, in some way or another, has existed "throughout history and into the distant future." Of course, this was a marketing gimmick to give us dozens of versions of Batman (Viking Batman, Cyborg Batman, Pirate Batman, etc.) but did it in some way inspire Grant Morrison's work on Batman post Final Crisis? Who can tell?  Today I'm looking at Nightwing, one of the figures from the first series who isn't Batman.  Interested? Then join me after the break..... 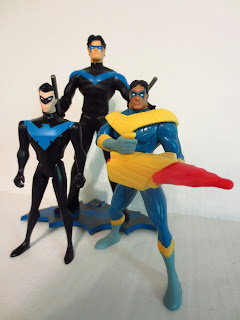 Nightwing is a little under five inches tall, although the fact that he's somewhat preposed (he's not standing straight up) would probably make him a bit taller.  The Legends of Batman figures are somewhat larger than the Kenner Batman figures from The Dark Knight Collection, Batman Returns, and Batman: The Animated Series, although not always taller.  They're also much more muscular and preposed, making them fit in better with the Batman Forever figures released in 1995. 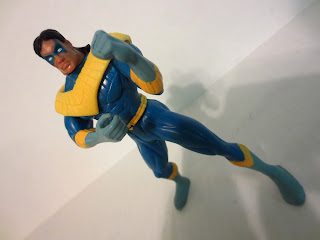 Nightwing has the traditional Kenner five points of articulation: swivel hips, swivel shoulders, and a swivel neck.  While he's sculpted in a pose that allows him to hold his included missile launching accessory, the pose looks fairly decent without the accessory, too. It almost looks as if he's in a fighting stance with his right arm guarding his mid-torso and his left arm up in a high block.  While he has a wide stance, he can easily sit in  most 90's Batman vehicles, as his legs close together when put in a sitting position. 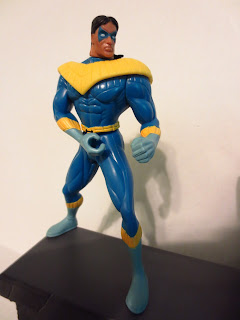 As I've mentioned earlier, the design aesthetic chosen for this line is somewhat more muscular and dynamic than Kenner's previous Batman lines. In fact, one might suspect that Kenner was attempting to make figures that were closer in style to popular action figure lines from Playmates, such as Teenage Mutant Ninja Turtles and Toxic Crusaders.  Overall, Nightwing is a pretty basic figure.  He's pretty much just a muscular, male body sculpted wearing a tight bodysuit.  His leg, arm, and ab muscles are all very pronounced.  He does have a grid-like vector sculpted onto his chest, but the full look of the character is achieved through a separate vector piece (examined closer below).  The head sculpt isn't bad--it's a very neutral expression with just a hint of sternness to it.  Nightwing's hair is flowing behind him, and somewhat swept over his left shoulder. It's very 90's, but that's OK. 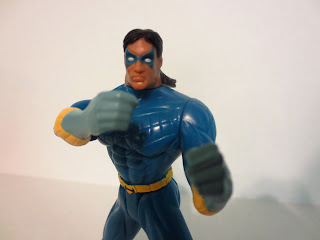 Nightwing's color scheme and paint are pretty simple, but look good overall.  The body's molded in a dark blue plastic with the yellow elements, such as the cuffs of his boots and gloves, as well as his belt, painted on. The yellow edges are a little rough, though.  The belt even has a little symbol on it that doesn't look quite like the Bat symbol or the Nightwing symbol. Maybe it's an earlier version of the Nightwing symbol? The gloves and boots are a bluish gray.  The face is nice and clean, as there's no slop on the hairline or around the edges of the mask. 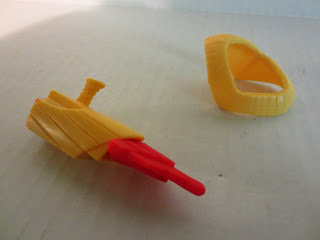 Nightwing comes with the trading card I mentioned above, but he also comes with a "sonic blaster", a missile, and an "armored cowl."  Where to start? How about with the "sonic blaster," which is simply a standard missile launcher, the most default of action figure accessories in the 90's.  It's a boxy yellow missile launcher with a pattern on it that's similar to his "armored cowl."  Nightwing can hold the handle in his right hand, and there's sort of a groove to rest on his left fist.  Push the button when it's loaded, and the red missile fires quite far, with a nice bit of "oomph" to it. Pretty standard stuff, really. The next piece is the "armored cowl," which may be armored, but certainly isn't a cowl.  A cowl is a hooded garment of some kind, but Nightwing isn't wearing anything like that. He's simply got an armored yellow chest piece that fits over his neck.  It resembles the yellow vector shape on the front of Nightwing's outfit during the Knightfall storyline, and thus is crucial to completing Nightwing's look.  I'm not quite sure why Kenner made this a separate piece, but it does stay on him remarkably well.  Overall, nothing terribly exciting here, but he's not barren of accessories. 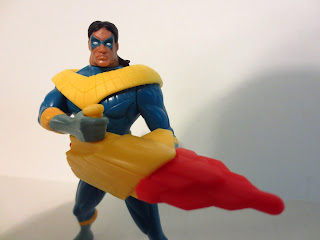 I never owned this Nightwing as a kid, but I believe that seeing him on toy shelves was my first introduction to the character (my first Nightwing was from the first wave of The New Batman Adventures line).  For a 90's era Batman figure, he really was not bad. He nicely represents the character's appearance in the comics, especially the Knightfall saga, and is a solid, durable toy. I'm not a huge fan of the missile launcher, but at least the figure itself is unhindered by a useless action feature. If you're a big fan of the character or simply a collector of 90's Batman merchandise, you could do a lot worse than this version of Nightwing. He's a fun, well made figure, even if he's a little plain. Confirmed Good and a 1/2. 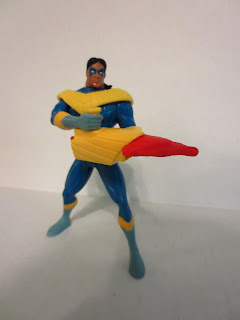 
Barbecue17 dressed up as Robin for Halloween the year Batman Forever was released.  Perhaps it's time for him to don a Nightwing costume? If it happens, you'll find evidence of it on his Flickr account first!