Yes, the official name for this series of action figures is "Video Game Superstars Presents: Capcom's Resident Evil 2." That's too darn long.  I'm simply calling it Resident Evil 2, because that's all you care about, right? Resident Evil is quite possibly my favorite video game franchise of all time and Resident Evil 2 may quite possibly be the best game in the series.  I don't know, there's been so many good ones (and a few bad ones) that it's tough to say. Resident Evil 2 had a deliciously creepy atmosphere, excellent gameplay that smoothed out the flaws of the original, fun puzzles, and an excellent assortment of enemies. One of the big baddies from the game (because there were definitely two; don't forget Mr. X) was William Birkin, a former Umbrella scientist who injected himself with the experimental G-Virus after an assassination attempt by Umbrella left him mortally wounded.  Throughout Resident Evil 2, protagonists Claire Redfield and Leon S. Kennedy attempt to keep the mutated William Birkin away from his daughter, Sherry.  Mutating throughout the game after every defeat, this figure represents William in both his third and fourth incarnations through the usage of a transforming mechanism.  Join me for a look at William G-3/ William G-4 (henceforth just called William) after the loading screen........

I have a ton of Resident Evil figures from a variety of companies: Palisades, Moby Dick, NECA, and even Hot Toys, all of which have a different design style and scale.  (Palisades Toys released a version of William in his G-4 form).  Toy Biz's design style for these figures is very much in line with how they handled their Marvel figures around the same time- they're a bit cartoonish, almost anime-influenced, you might say. Still, there's a certain charm to them, especially considering that they came from a fairly violent, Mature rated video game.  The human figures are all around 5 inches, with the various creatures being either larger or smaller. Oh my gosh! Does that mean that McFarlane's Walking Dead figures, since they're not in scale with any other modern toy line, were specifically designed to be compatible with Toy Biz's Resident Evil figures? If I had any of the McFarlane Walking Dead figures, I'd try that. William is a massive figure, though, standing 8 1/4 in his G-3 form. 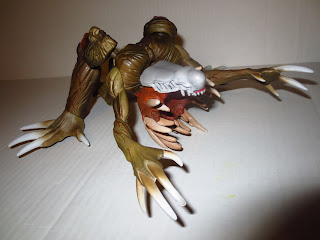 Well, a good deal of the articulation here is included to facilitate the transformation of William between his two forms.  Still, the guy is pretty stacked, especially considering that he came out in 1998.  William features: hinged toes, hinged ankles, hinged knees, swivel thighs, a swivel waist, swivel front shoulders, swivel rear shoulders that are on a sliding peg to aid in transformation, ball jointed rear elbows, swivel rear wrists, and a swivel neck for the G-3 head.  The leg joints are somewhat problematic, because the upper body is so heavy that the leg joints want to give away under the weight.  You can get both Williams in quite a few decent poses, but I have a little bit of trouble with the transformation. Here's how the transformation works: basically, you swap William's heads and then swing his rear arms around so that he can be crouching on all fours. I have a really hard time keeping him in the second position. It's a neat idea in theory, but I'm not sure how well I think it was executed.  I also suck at Transformers. For real. 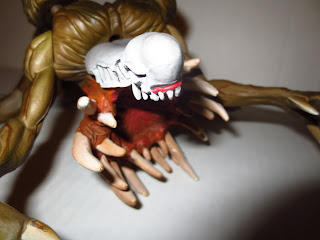 As mentioned in the style section, these figures were really marketed as toys first and collectibles second, so the sculpt is just a bit cartoonish. That doesn't mean it isn't detailed, however.  The body is covered with a variety of veins and a bizarre muscular structure. It must be a challenge to sculpt a character that is designed to "transform", especially when the character is organic and not mechanical.  While the details are somewhat soft, there are plenty of them.  I'm particularly a fan of the massive claws on all of William's limbs, as well as the two gigantic eyes on the back of his larger limbs that become G-4's front legs.  There's two more on his thighs, and they're all really creepy with an odd texture.  The G-3 head sculpt is probably the weakest aspect of the figure.  It has a mouthful of intricate teeth shown through a lip-less grin (kind of like the Nemesis), and some really deep eye sockets, but something about the way it comes together turns me off a bit.  The G-4 head is much better, and resembles a cross between a great white shark and a Xenomorph from Aliens. The texture of the palate is creepy, and extends down into the enormous mouth attachment. It's well sculpted and looks like one massive mass of muscle, except with dozens (I counted 36) of sharp teeth popping through it. Nasty, but well done. Remember how fearsome this guy was at the end of Resident Evil 2? Well, he's not quite as fearsome here, but this is still an oddly unique figure. 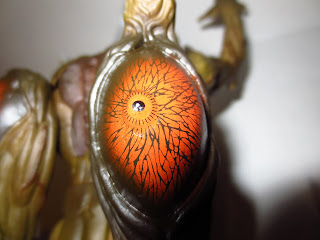 The paint is very good, however.  While he's mainly molded in a light tan plastic, the body is covered with intricate paint apps.  He's multiple shades of brown, and the paint lines are intentionally muddled at times to give the figure a more organic appearance.  The giant eyes on the rear arms and thighs are incredible. They're a hideous reddish-orange, with plenty of little blood vessels painted on. The G-4 head and mouth are also really well done, as each. There's a little slop on some of the teeth, but with a giant beastly abomination like this guy, it's not terribly noticeable. 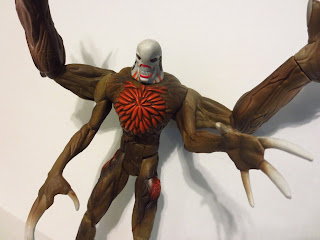 I'm not sure if they're really considered accessories, but as you can tell by now (if you've been paying attention) William does come with three parts which separate from the main body: his G-3 head, his G-4 head, and his G-4 mouth.  The heads are nice and solid, and I don't have any fear of them breaking. The G-4 parts are made of a very dense, rubbery material, making sure that the "teeth" look good but are not brittle. 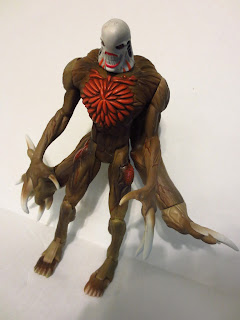 Toybiz's Resident Evil line has long been one of my favorites. I remember picking up the Forrest Speyer and Lab Zombie two-pack shortly after having played Resident Evil at a cousin's house, and just fell in love with the universe. I managed to get this figure from a friend on another message board, and am very happy I did. It's not my favorite figure since I'm not really a fan of transforming action figures like this, but I'm impressed by the effort Toy Biz put into the figure. I'm confident in giving this figure a Good and a 1/2. It's probably my least favorite figure in the line, but it is by no means a bad figure. Heck, I'm sure there are some folks who think this is the absolute figure in the line.


We haven't reviewed any other Resident Evil figures on ThEpic Review yet, but when Resident Evil week hits (July 22nd through July 26th) we'll be rectifying that. Until then, you can check out zombie themed reviews of  the Assemblage Zombie from Valerobots and the Black and White Michonne with Pet Walkers 3-pack from McFarlane's Walking Dead line.  Not only does Big Bad Toy Store have a ton of Resident Evil figures available in stock or for preorder (I really want this Ada Wong) but do have William G3/G4 in stock.

Barbecue17 beat Resident Evil 2 more times than he can count.  He also spent a large part of 1998 stiffly "tank" walking like Resident Evil characters, just because he could.  There may be photos of that on his Flickr account.