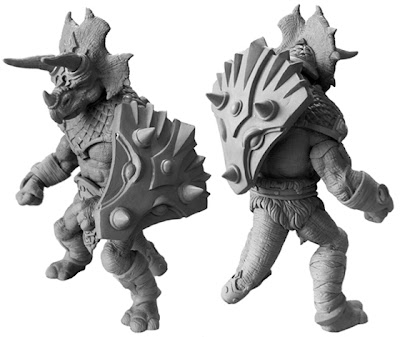 I thought you all might like seeing one of the completed stactions (static action figure) available through the Defenders of Eden Kickstarter campaign.   The campaign only has a few days left, so you'd better jump in and support this awesome comic book. Just take a look at General Cerros here.  Besides the fact that he's an awesome Triceratops hero, I particularly like the fact that his shield is shaped like a Triceratops head. That's just an extra level of cool!  Plus, won't he look awesome standing with other figures you own?  He'd look awesome standing with your NECA Teenage Mutant Ninja Turtles, any of the Four Horsemen like Gothiropolis or Seventh Kingdom, and even Masters of the Universe Classics. See after the break for a comparison picture.... 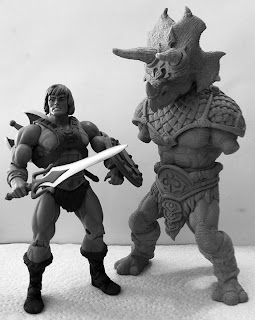 While the General Cerros shown here is simply an unfinished prototype, you can see how awesome he looks next to a MOTUC figure.  Seriously, whether you want the comic book Defenders of Eden or just these cool new stactions, head on over to Kickstarter and pitch in to help fund the Defenders of Eden Kickstarter campaign! Also, check out our epic interview with the creative team behind Defenders of Eden here on The Epic Review.