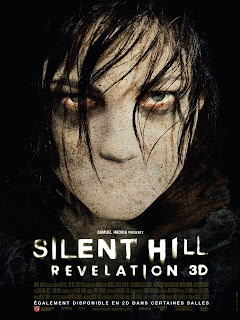 Like many of the later installments in the Silent Hill video game series, Silent Hill: Revelation (AKA  Silent Hill: Revelation 3-D) is truly a mixed bag.  Amidst the horrifically disturbing visuals and interesting creature designs, there's also a plot which can border on incomprehensible to those unfamiliar with the video games.  Silent Hill: Revelation is the sequel to 2006's Silent Hill, a film that was based on the plot of Konami's 1999 Playstation game Silent Hill.  Revelation, however, is based on 2003's Silent Hill 3, which was the direct sequel to the original game (Silent Hill 2 told it's own story). Not too confusing, right? If you've never played the games or watched the original film, you're going to be lost. While the movie does offer some flashbacks that will help the initiated to recall specific elements from the first film, good luck to those who haven't. Going into this, I actually wasn't aware that this film was a sequel. I know that there's a trend towards giving sequels a subtitle rather than a number, but in an instance like this the number would have been helpful, as I probably would have made sure my fellow viewers had seen the original film.  More thoughts after the break....


Speaking of the original film, I was surprised to see most of the original cast members return for the sequel, especially considering this film had less than half the budget of the first and was released over 6 years later.  Sean Bean is back as Christopher Da Silva, now using the name Harry Mason to avoid a mysterious cult searching for his adopted daughter Heather, played by Adelaide Clemens.  Heather was the protagonist of Silent Hill 3, and Clemens did a really good job of bringing this character to life onscreen, both through her acting and in her appearance.  While the movie has a mixture of decent and poor performances, I feel that Clemens easily stood out portraying a strong young woman with lots of baggage to her. She manages to be simultaneously frightened and empowered to overcome the obstacles that stand between her and her father.  There's also a crazy little cameo from Malcom McDowell, once again finding him in a mental hospital.

In looking at the strengths of the movie, I will say that writer and director Michael J. Bassett seems to be completely unashamed about making a video game based film. I think that's positive, as all too often directors seem to be ashamed of or oblivious to video game source material.  The movie is filled with references to people, places, and events from the series which were really fun for this fan.  The film does suffer here, though, as dialogue seems to be delivered in chunks in a similar manner as to how games often have their story cutscenes between sections of gameplay. Sometimes there's just too much dialogue flowing at once in order to make sense of things.  The film's pacing isn't bad, though. I thought the movie actually managed to move along nicely as Heather makes her way back to the town of Silent Hill while avoiding the Order (not the 2001 Jean-Claude Van Damme film).

Overall, I did enjoy the set and creature designs in the film.  Above all else, the Silent Hill series is known for atmosphere, and the movie mostly delivers.  While the film was made on a budget, effects such as the transitioning between the normal world and the "dark world" are handled very well.  Some of the creature effects, while inventive, do suffer either from the diminished budget or due to the fact that they were designed to stand out in 3-D.  I did like the mannequin monster, the girl turning into a mannequin, and the appearances of Alessa.  Early on in the film, there are also a few scenes that showcase gruesome creatures and locales that lack the subtlety of the Silent Hill hill approach to horror. A scene where some zombie children eat "people burgers" definitely felt out of place in the context of the film, which is saying quite a bit.

I enjoyed Silent Hill: Revelation, but I feel like I'm probably in the minority.  It's certainly a movie made on a limited budget for a very specific audience that requires a lot of prior familiarity with the source material. For someone just looking for a horror film for a Saturday night, I'd say skip this and move on. For fans of the game who want to see the story of Silent Hill 3 brought to life, I'd say this is a Good movie and worth checking out if it interests you.