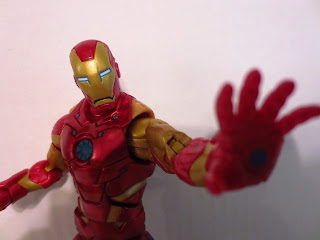 Here's my review of the fourth figure in the Marvel Legends Iron Man 3 subset: Heroic Age Iron Man.  While I only own three of the other figures in the series (Ultron, Classic Iron Man, and Iron Patriot), I also own the complete Iron Monger since the Brad gave me the Build a figure pieces from his Mark 42 and Lt.Col. James Rhodes.  If this were Batman or a DC Superhero, I could probably tell you everything about where the suit came from. It's not, however, so I'm left just reviewing a fairly cool looking figure. Want to learn more about this "Bleeding Edge" version of Iron Man? Then read on, after the break....

Heroic Age Iron Man comes in right around 6 1/2 inches.  He's built similar to many other Marvel Legends (although not exactly) and will easily fit in with any comic or movie based Marvel Legends you already have.  He's in a nice, realistic style that could fit into any display of superheroes in this scale. As far as I could surmise, this figure is an entirely new sculpt, which is always a plus. 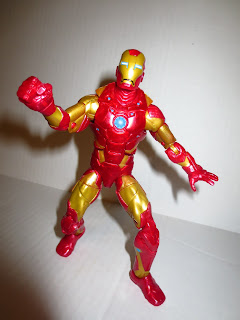 Heroic Age Iron Man has the following points of articulation: ball jointed ankles, double hinged knees, swivel thighs, ball jointed hips, swivel waist, a hinged abdomen, ball jointed shoulders, swivel biceps, double hinged elbows, ball jointed wrists, a hinged neck, and a ball jointed head.  As you can see, there are some really great points of articulation here. First, I'm happy to say that the hips are not the standard Marvel Legends hips: the thigh swivel is lower, which makes the figure look better and function better. Elements like the ball jointed ankles and wrists are really conducive to expressive posing, although the wrists are somewhat hindered by the extended wrist gauntlets, although most normal poses can still be achieved perfectly.  Knee, thigh, and elbow joints are really tight, but the abdomen hinge is really loose. I wish the hinge joint on the neck went higher for better flying poses (like on Ultron and Iron Patriot) but it doesn't. You win some and lose some. The quality control is good all around, however. 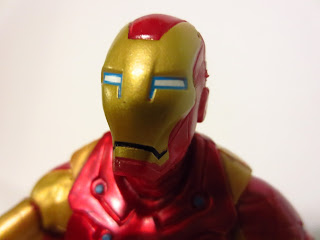 As far as I am aware, this Iron Man figure is an entirely new sculpt.  He looks really awesome, especially with the various panels of armor that make him look more like a guy in a mechanical suit than a guy in spandex (see Classic Iron Man).  While the body armor is quite different than what we've seen in the films, the helmet looks incredibly familiar.  I like the level of detail in the armor, especially things like the repulsors on the soles of the boots and the way the armor looks segmented, but pliable.  Iron Man's right hand is a fist (good for punching) and the left hand is an open repulsor shooting hand. 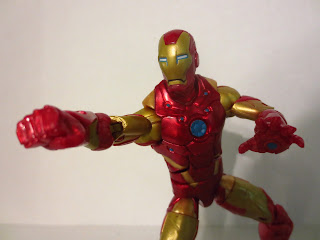 Like on most of the Iron Man 3 Marvel Legends figures, the paint is a mixed bag.  Most of the figure is molded in a pearlescent red plastic that has the consistency of fancy liquid hand soap. You know what I'm talking about. It looks good from a foot or two away, but when you look closer it stops looking metallic and looks more like cheap plastic, marble, or fancy Christmas soap.  Weird, huh?  The gold paint used is a great tone and goes well with the red, but the application of it is sometimes messy.  It's definitely showing through on my figure's thighs and is scraping off of his elbows a bit. There are lots of blue dots all over the armor. They're the same color as the reactor on the chest, but some of them are a little off base. It's not the worst we've seen (Ultron) but not the best, either (Iron Patriot).

Heroic Age Iron Man comes with no extra accessories except for the Iron Monger piece (Iron Monger's left leg).  Want to learn more about that? Check out the Iron Monger review here.  A repulsor blast or even an extra head would have been nice additions, though. 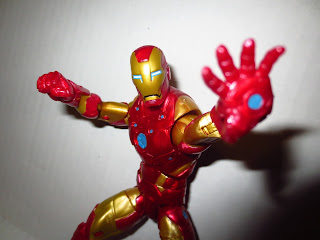 While I complained about the paint/ plastic and the lack of extra accessories, I really don't think Heroic Age Iron Man is a bad figure at all. He's probably my second favorite figure of the four Iron Man 3 figures I've reviewed. I'll easily give him a Good and a 1/2 ranking on the old Epic Review scale.  While I don't own them, I hope that at some point Brad will review his Mark 42 and Rhodes as War Machine figures, because I imagine they'll be the true stars of this series.


Here are the links to the other figures in this series reviewed so far on ThEpic Review: Classic Iron Man,
Iron Monger Build-a-figure, Iron Patriot, and Ultron.  These guys can all be found at Big Bad Toy Store. Why not click on the banner above and snag yourself a set today? You know you want an Iron Monger!

Barbecue17 entered the Heroic Age when he turned 14 after a double feature of Predator and Street Fighter. He never looked back. You should look back, however. Back at his Flickr account, that is!