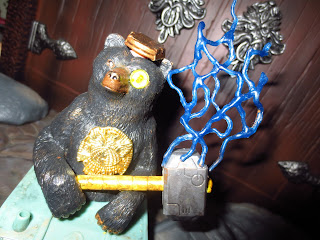 In early June, I was fortunate to attend Charlotte's Heroes Con for the fourth year in a row.  It's a great convention that's getting bigger every year, and there's so much cool stuff there that it takes something really special to catch your eye.  This year I found something in the form of Battle Babies, an assemblage-type line that mixes random toy parts with little plastic babies.  I had stopped to browse over a small display of ManOrMonster? products when I began talking to Brad Rader, and noticed how cool the weird little creations he was peddling were.  Today I'm looking at the first of two pieces I purchased. This one's called "Thunder Tread", and is essentially a bear riding a tank.  Remember that, while these utilize multiple pieces from other lines, they're also individual, meaning that you won't be able to pick up this exact piece.  You can check out their Storenvy store here for more cool pieces, however. The fact that they're unique and assembled from multiple pieces means that the traditional categories don't always apply. Anyways, ready for a bear riding a tank with a baby in his head?  Then let's get truckin'! 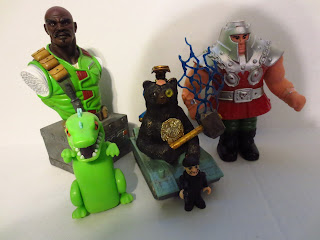 Thunder Tread is just a little under 3 7/8 inches tall and just about 4 3/8 inches long.  The style of this toy line is that Rader finds random action figure parts and accessories and combines them together, always adding plastic babies into the mix.  While I can't identify all of the pieces, I do know that the tank body is from a Toy Biz Bonebreaker figure from their X-Men line, and the translucent blue energy bolts come from various Star Wars figures.  The logo on the bear's chest is from a wrestling belt and, the hammer he wields is some version of Thor's hammer, Mjolnir.  I really like looking at the various Battle Babies pieces because each one is a miniature scavenger hunt, kind of like those I Spy books, but with action figure pieces. 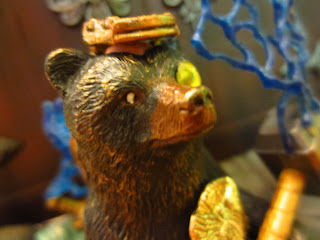 Thunder Tread is mostly a solid body of pieces, but he does feature a few moving parts.  First, the four wheels on the bottom of the tank body can roll.  Second, the bear can turn at the waist. Third, and perhaps coolest, is that there is a hinged lid on top of the bear's head: open it up and inside you can see a baby peeking out. What's he doing in there? What do you get when you cross a elephant with a rhino? The answer to both of those questions is "elefhino." 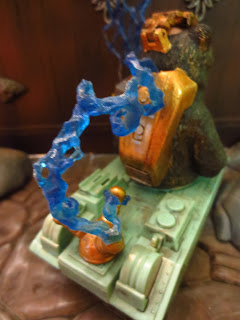 Since this is a piece made up of preexisting pieces, judging the sculpt of the figure really isn't fair. Instead, I'm simply looking at the flow and design of the piece.  First, the use of the tank body from Bonebreaker is inspired. It's a great (and fairly recognizable) piece that immediately makes a statement about the way pieces are repurposed in this project.  The next major aspect that captures your attention is the bear.  The bear is what drew me into looking at the piece. While the figure of the bear appears to be a normal bear, perhaps something you'd pick up at a zoo or a nature museum, the way the bear has been augmented provides a jarring dichotomy between nature and technology.  The bear is not only attached to the tank at the waist, but is wearing a back pack that features a beam of energy conecting to a triple-pronged electrode of some kind on the back of the tank.  The hatch on the bear's head (which lifts to expose the baby) also leads one to wonder the true nature of the bear (the odd mechanical dogs from Farenheit 451 come to mind for some reason. The left eye, while not immediately noticeable, certainly crept up on me slowly to cement this bear's place as a cyborg of some type.  While the bear's arms seem to be in a pretty neutral pose (for a bear, that is) he does stoically wield a giant hammer with energy crackling from it. It's an excellent assemblage of varied pieces that feels like it belongs together. It's easy to put random junk together, but much harder to make it feel like it belongs. Thunder Tread feels like a distinct entity who was just waiting to come into existence. 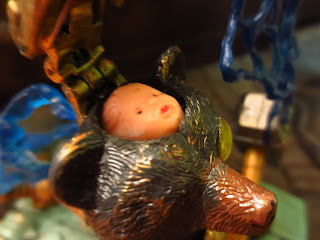 Besides just thoughtfully putting together a number of disparate items, Rader has also used a bit of paint to give Thunder Tread a more unique look. By adding a few washes of paint, the overall piece is definitely enhanced.  It appears to me that a copper/goldish paint has been applied to the backpack and hatch on the bear's head, complete with some black dry brushing to give the metal a bronzed look. The bear itself also appears to have been given a similar paint application complete with metallic claws.  The tank body itself also has some dry brushing to give it a more weathered look/ All in all, the extra paint applications really help bring the piece together and stress that this is more than just a pile of glued together parts, but a well thought out assemblage styled creation. 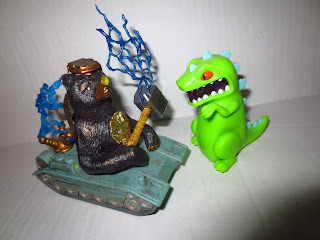 While Thunder Tread utilizes many different accessories, because he is an assembled piece he has no removable accessories. Sorry, that's just not who he is!


Many of us probably cringed last week when we read the story of the artist who destroyed a copy of Avengers #1 in order to make a paper mache statue.  Sometimes the material cost just doesn't justify the effort. Thunder Tread here, however, certainly does.  I think Brad Rader has found an excellent way to both repurpose and preserve elements from action figures that many collectors pass over in order to create something new and unique. Not only is this a great piece of pop culture art that unabashedly celebrates the love for toys that so many of us have, but it also manages to be a fun and fairly durable toy in and of itself.  I'm not recommending that you give this to a toddler or anything, but there's no reason that Thunder Tread (or any other Battle Babies) can't be utilized in display scenes or as a neat desk top toy. Easily an Epic piece, and perhaps my favorite thing I bought at Heroes Con this year! 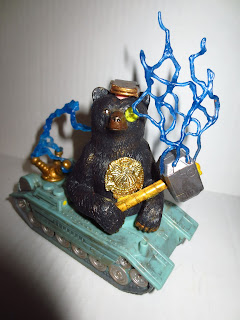 I've reviewed a few different independent toys that walk the line between toy and art piece.  I've looked at Baby Deadbeet from OTMF! by October Toys and three pieces from Rupert Valero's Valerobots: The Assemblage Juggernaut, the Assemblage Zombie, and the Tiara Assassin.  If you're interested in securing a Battle Baby of your own, head on over to Storenvy and pick one up today.

Barbecue17 literally knows a guy called "The Bear" but he doesn't ride around in a tank. He rides a scooter. Barbecue17 hasn't updated his Flickr account in quite sometime, but he'll get around to it one of these days.