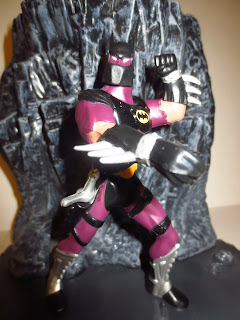 Last month during the Week of the Batman on Battlegrip, Philip Reed posted the list:  "Ten Awesome Kenner Batman Action Figures of the Nineties."  One of the figures that made his list was a figure from series 2 of Kenner's Legends of Batman line, Dark Warrior Batman.  I'll be reviewing him today.  It should be well established now that A.) I love Batman, and B.) I love crazy Elseworlds versions of Batman, so it seems logical to assume that I'll like this guy.  What the heck is Dark Warrior Batman, anyways?  Seeing the giant silver spiked shield and the black helmet, I initially assumed this was intended to be a medieval Batman of some sort. You know, like Batman as a knight or something.  It turns out, this is actually a future version of Batman.  Let's listen to the words from the card back, written down so long ago by a forgotten Kenner scribe: "Terror abounds on the ravaged landscape of tomorrow, where Dark Warrior Batman metes out justice in a barren and hopeless world. Hordes of destructive nomads scavenge what's left of a post-apocalyptic earth and it's up to one power- Dark Warrior Batman- to enforce the only form of law and order remaining for mankind.  Will there be a day after tomorrow worth surviving for? Only if Dark Warrior Batman triumphs and retrieves civilization from the brink of extinction."
OK, let's take a break for a moment and think about what we read. Good grief, that bio was amazing. Seriously, if DC ever wants to make all the money in the world, they just need to start writing Batman stories based on that bio. Who wouldn't read that? It's Batman meets Mad Max.  Imagine how freaking cool this guy's Batmobile must look.  Well, I've decreed that the bio is Confirmed: Epic. Heck, it's better than both Batman Forever and Batman and Robin (although so was that case of food poisoning I had about three years ago).  So is the figure any good? Read on after the break to find out. Civilization depends on it!

If you measure him in his standing pose, Dark Warrior Batman is five inches of mutant fighting fury.  He's a little bigger than some other Batman figures from the early 90s, but he's also meaner than them, too! Hey, maybe he just got exposed to a little bit of radiation that made him grow? He'll fit in well with the rest of your Legends of Batman figures, as well as Kenner's Superman and Total Justice lines. 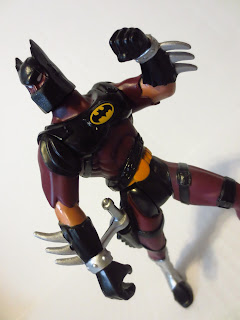 Dark Warrior Batman only has five points of articulation, but that's really all he needs: one to defeat each of the Four Horsemen (of the apocalypse, not the sculptors), and one to look around and survey the destruction he has wrought, am I right?  He has swivel hips, swivel shoulders, and a swivel neck. Well, the left shoulder is a normal swivel, but the right shoulder has a spring in it for "mace slamming action."  When you lift it, Batman's arm swings down to slam his mace onto someone's head (non-lethally, of course).  Of course, if he's unarmed you can pretend he's slapping down a slammer and playing some Pogs with Nightwing. 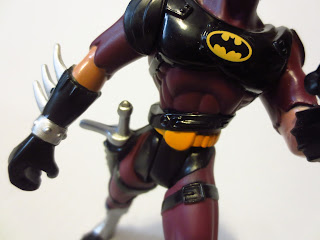 What does a dark, post-apocalyptic warrior wear?  Apparently a body suit, a helmet that looks like the Batman cowl, spiked gauntlets, and two belts. Why two belts?  Because two belts is the future. Wearing multiple belts was all the rage in the 90's (in comics, anyways), and we all know that's a trend just waiting to come back.  The sculpting is really nice all around and features some really cool details.  The serrated
greaves actually look like they're being worn over some standard boots, and feature some cool jagged blades on them.  The bodysuit shows Batman's muscular body and features ripped sleeves. Is this battle damage? Did Batman just get hot wandering the wastelands all day? Who knows? Anyways, can anyone think of another Batman figure that has skin exposed anywhere other than on his face?  Other than that battle-damaged DC Direct version of Batman, I can't, so perhaps this figure is some type of super rarity.  On Batman's right leg is a holster with what looks like some type of knife in it. It's not removable, which is a shame, as it'd be a very cool feature.  The helmet might be the coolest part, however, as it seems to be a cross between the typical Batman cowl and a motorcycle helmet.  Since dudes running around in motorcycle helmets seems to be a standard trope of post-apocalyptic fiction, perhaps that's where the inspiration came from? Anyways, this is a very unique looking Batman figure. 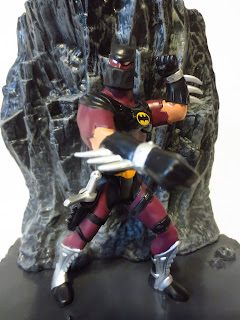 While Batman can come in every color of the rainbow, he certainly looks best in colors like gray, black, blue, and purple.  Dark Warrior Batman utilizes a really nice purple and black color scheme that stands out. It's a deeper purple than we've seen on some other Legends of Batman figures, but it really works.  So, purple for the bodysuit, black for the armored bits, and yellow and silver for the various details.  One of Batman's belts is a familiar utility belt yellow (that's a Crayola color just waiting to happen), and the stamped logo on his chest is also the traditional yellow, while the Shredder-like leg guards and arm spikes are silver. The non-removable knife in his sheathe is also silver. All of the paint is clean and neatly applied, although you'll have to add the post-apocalyptic singes and scrapes yourself (NOTE: Barbecue17 is not responsible for you damaging your figure!). 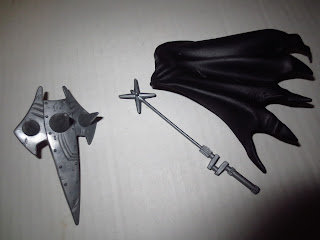 Dark Warrior Batman includes three accessories: a spiked shield, a mace, and a removable cape.  The spiked shield is absolutely wicked. It's a huge kite shield that vaguely resembles the batsymbol, and has three massive spikes sticking out from the front. There's lots of claw marks and nicks all over it.  It's got a hole on the back so it can fit tightly over Batman's left fist, but due to the angle of his arm the shield is held at an awkward angle.  The mace is kind of odd; it sort of looks like one of those spiked things you use to aerate your lawn. Maybe Batman swiped this from Alfred? It fits in Batman's right hand and stays in there when you swing it. It's not terribly exciting, though.  Last, but not least, is the cape. It's made of a nice hard rubber and features a loop that goes all the way over Batman's head. It stays on tight and secure and won't fall off, even during the fiercest battles. It, too, looks worn and weathered, featuring stitch marks where it's been repaired on the fly. 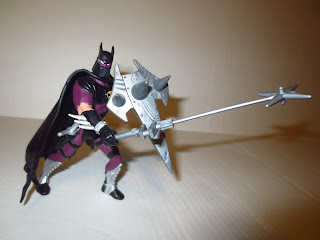 What an interesting portrayal of a post-apocalyptic Batman!  I'm not sure it's the direction I would have gone in, but it works.  While his mace is dull and I wish the knife on his side was removable, the colors, sculpting, and spiked shield are all quite fun. Plus, this guy has the best bio ever written. Period.  I think I'll go with a Great on this guy (remember, I'm ranking him based on the time he came out, not by today's standards). If you're wanting to pick up some of the best and most significant Legends of Batman figures, I think I'd put this on the second tier of figures to pick up. He's definitely a unique Batman variant, and that's really saying something. 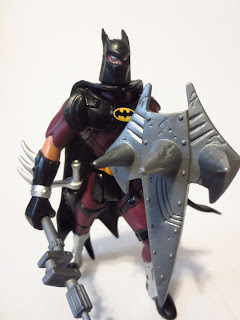 Dang! We've reviewed a lot of Batman stuff!  From Legends of Batman, I've reviewed Nightwing, Knightsend Batman, The Riddler, Viking Batman, and Samurai Batman.  Other Batman toys we've reviewed have been: Batman from Young Justice Invasion,  Arctic Shield Batman from Mattel's Batman line, Talia al Ghul from DC Collectibles' Arkham City, Planet-X Batman, The Dark Knight Returns Batman and Injustice Batman from Mattel's DC and Batman Unlimited lines, Laughing Gas Joker from Kenner's Legends of the Dark Knight,  and the Dark Knight Rises Bane from Hot Toys.  Click on the banner above and you can find many of these Batman figures (and others) at Big Bad Toy Store.

When Barbecue17 first laid eyes on Dark Warrior Batman he exclaimed: "I have that exact same outfit in my closet!" Is this story true? Find out on his Flickr page.