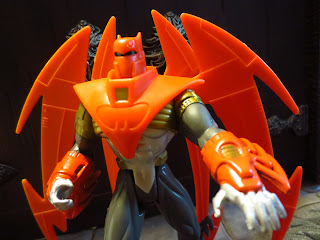 Kenner was so obsessed with producing as many Batman figures as they could that they even started making action figures of other characters and calling them Batman.  Take this figure, "Ultra Armor Batman," for example:  this isn't Batman. Well, it's not Bruce Wayne, anyway. It's Jean Paul Valley, also know as Azrael, disguised as Batman. Yes, Jean Paul Valley did take over as Batman while Bruce was injured during the KnightFall storyline (which Legends of Batman drew heavily from) but it still seems kind of sneaky.  This is the armor that Azrael wears when Bruce finally challenges him in order to take back the role of Batman, so it's cool to see that Kenner used some Batman source material here.  As part of series 3 of Legends of Batman, Ultra Armor Batman was released in 1996.  Ready to jump right in to the review? The join me after the break- but be forewarned that I'm calling him Azrael for the rest of the review. 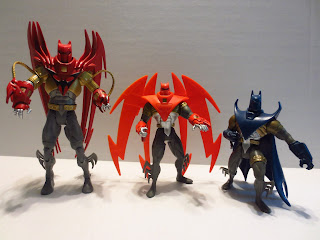 Azrael/ Ultra Armor Batman stands 5 inches tall and is in the same style as the rest of the Legends of Batman line: he's not overly animated nor does he look super realistic. Very comic book inspired is perhaps the way to describe his look.  He's a little bulkier than your average Batman figure from the early/mid 90's in terms of sculpt and style, but he wouldn't feel too out of place in a Batman: The Animated Series or Batman Forever Line. He'd definitely work well with Total Justice and Kenner's Superman comic-inspired line. One thing I will mention is that Ultra Armor Batman is simply a repaint of series 1's Knightquest Batman with a more comic accurate paint job and with Crusader Batman's missile launcher. I don't own that figure (yet), so I'm cool with this. 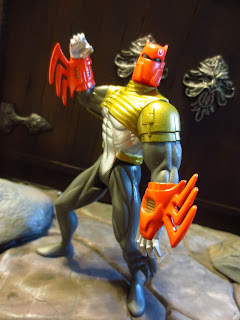 Ultra Armor Batman/ Azrael has the Kenner 5, like most Legends of Batman figures- swivel hips, swivel shoulders, and a swivel head.  He's put together well, looks fine with or without his weapon, and can stand by himself whether or not he's wearing his cape. That's about the highest praise I can give to a figure from the period with the standard five joints in regards to articulation. 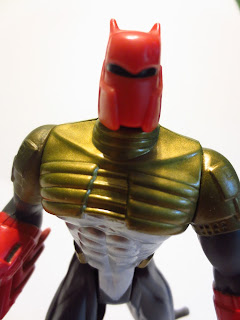 Intentionally designed to reflect the extreme nature of 90's comics, Azrael's Batman armor certainly features lots of those 90's indulgences, such as giant gauntlets, curved blades, and armored helmets.  The figure looks like a very well muscled guy (he works out) in a standard Batman-esque body suit.  On top of that, he's wearing two layers of heavy duty chest armor, one of which features banded strips of a more flexible armor.  The gauntlets are incredibly well sculpted, and look to feature the various gadgets that Azrael used. There's even an ammo belt running from the back of the right gauntlet and connecting with his shoulder in the back.  It's a nicely detailed sculpt that has held up pretty well. 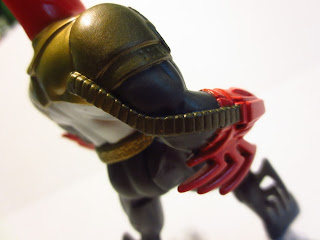 I really like the colors chosen for Azrael--red, silver, gray, and gold look really good together.  The head's molded in red plastic (like the cape), while the gauntlets are painted red.  The metallic colors of the upper body armor (silver and gold) look quite nice. There's not much else to say about the paint work other than that it's clean and neat. 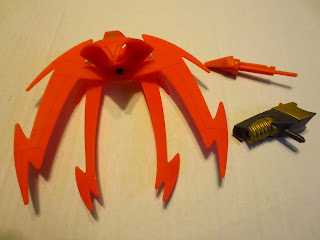 Other than the standard trading card all the Legends of Batman figures come with, Azrael comes with two accessories: a "blasting battle cannon" and a bladed cape.  The "blasting battle cannon" is your standard missile launcher, and it's simply borrowed and repainted from series 1's Crusader Batman.  It's easily held in Azrael's right hand, is painted silver and gold to match his outfit, and fires pretty decently. I'm not typically a fan of BFGs, but this one I like.  Next is the bladed cape. Rather than a standard cape, Azrael used a cape that featured hooked pieces of metal that were reminiscent of the strips of cloth on his Order of St. Dumas outfit.  The cape and harness are made up of three separate pieces--the harness, the inner blades, and the outer blades--and they're held together by a rivet.  This does allow the cape pieces to spin around, but there's really no reason to do that.  It's all molded in bright red plastic, with the spotlight on the chest being a separate paint app. There's even some details on the blades to make them look hi-tech and extreme!  The harness sets right over Azrael's head and shoulders and stays on pretty well, although rough play will cause it to fall off. 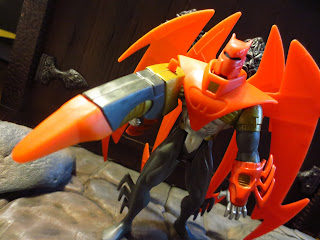 I really, really like this figure. He's a great comic-accurate version of Azrael as Batman once he switches to the red costume, he has some decent accessories and good sculpting, and he can stand on his own. He's also neutrally posed, which makes him versatile. I try to judge older figures in the context of their period, so I can easily say that this is an Epic.  Compared to many Batman figures from the period, this truly was a figure that stood head and shoulders above the rest.  If you're a fan of AzBats, try to track one of these guys down. I paid $2 for him at Heroes Con in Charlotte, and I'm sure glad I did. 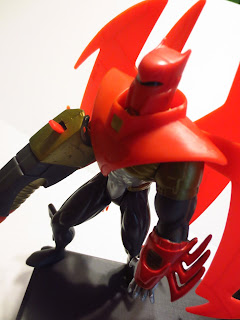 Dang! We've reviewed a lot of Batman stuff!  From Legends of Batman, I've reviewed Dark Warrior Batman, Nightwing, Knightsend Batman, The Riddler, Viking Batman, and Samurai Batman.  Other Batman toys we've reviewed have been: Batman from Young Justice Invasion,  Arctic Shield Batman from Mattel's Batman line, Talia al Ghul from DC Collectibles' Arkham City, Planet-X Batman, The Dark Knight Returns Batman and Injustice Batman from Mattel's DC and Batman Unlimited lines, Laughing Gas Joker from Kenner's Legends of the Dark Knight,  and the Dark Knight Rises Bane from Hot Toys.  Click on the banner above and you can find many of these Batman figures (and others) at Big Bad Toy Store.

Barbecue17 read every issue of KnightFall.  Plus all the tie-in issues.  In one sitting. In the dark. With his eyes closed. Beat that, chumps! He has more feats of nerdery listed on his Flickr page.