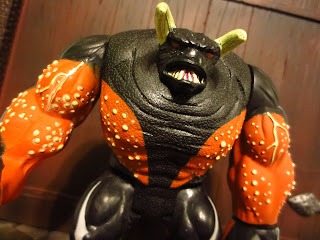 It would be impossible to discuss action figures from the mid 1990s to the present without discussing McFarlane Toys.  Known as Todd Toys at their inception, Mattel pressured them to change their name, believing that consumers would confuse the company with Barbie's little brother, Todd (I know that Ken's Steakhouse brand salad dressing has always confused me, leading me to purchase lots of disappointing birthday gifts for my little female cousins). In 1995 the company would become officially know as McFarlane Toys, and the age of the "Ultra Action Figure" would begin. Today I'm looking at Tremor, a character who first appeared in Spawn #25 and released in December of 1994 as one of the six action figures from series 1 of McFarlane's Spawn toy line.  I'm not a Spawn expert, so what I know about Tremor comes from the included comic book and a little bit of research: Tremor appears to be a former Mafia tough guy named Richard Masullo who was turned into an experimental bio weapon. Having held onto his conscience and failing to be the killing machine that Don Tony Twist wanted, Tremor escaped to become a thorn in the mob boss' side. Initially believing that Spawn was connected to the mob in some way, Tremor attacked the dark hero before learning that Spawn was also hunting down the mob.  The comic included with Tremor seems to have them partnering up at the end to hunt down bad guys together.  Now that the introduction is out of the way, let's take a look at Tremor..... 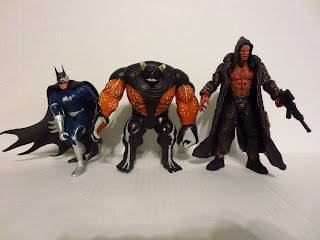 McFarlane Toys introduced us to the "Ultra Action Figure", which was their way of saying these figures were larger and more detailed than the rest.  Tremor, while looking like a comic or cartoon character, certainly does feature a good bit of detail.  He's certainly thick and chunky, but not as big as I remembered him.  He's only 5 1/4 inches from the bottoms of his feet to the highest point of his back.  You can see him above with some other figures from both Spawn and other lines. He'd fit in well with a number of lines, but almost seems too small for Spawn. 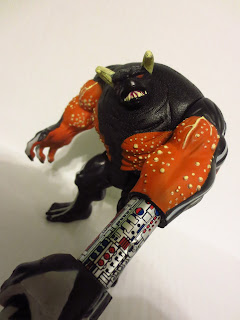 Tremor features one more point of articulation above the classic five. He has swivel hips, swivel shoulders, a swivel left wrist, and a swivel neck.  The swivel left wrist is actually part of his action feature: press a small button on his left arm and his left wrists springs forward one inch to reveal cybernetic implants inside his arm.  It's actually a decent action feature that gives the character more useful articulation, which is always a plus. Other than his arms, however, most of the articulation is useless. The hips can swivel up, but it feels awkward, like they might break if you do it too often.  The head's also at a weird angle, so turning it doesn't do much.  Tremor will stand nicely on his own, however, which is a positive. 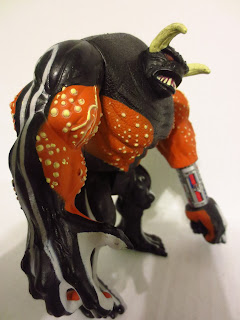 Sculptwise, McFarlane's Spawn figures were definitely far ahead of nearly everything else when they hit in 1994.  Taking a look at Tremor, the first thing you notice is just how grotesque he is.  He doesn't scream "kid's toy." While some of Playmate's Teenage Mutant Ninja Turtles figures surely had gross elements to them, there was a playfulness to those toys that's missing here.  Tremor's horns, jagged teeth, and wart-covered body give him a monstrous appearance that is somewhat frightening.  While elements like the legs and head are a little bit dopey by today's standards, the body details and skin texture are still impressive. 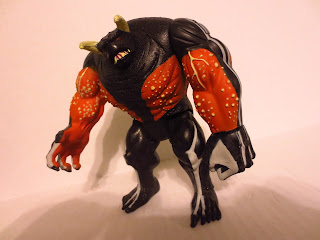 While it's still pretty decent for today, the paint work on this figure was more impressive in 1994.  Molded in black plastic, Tremor features a few extra paint details applied over his body.  His arms and legs feature grayish-white stripes, and there's a burnt orange pattern on his torso and arms as well. It's definitely a striking color scheme.  All of the little warts and veins on his body, as well as the horns on his head, are a pale yellow. There's even a wash on his horns to make them look more monstrous.  The teeth are appropriately nasty and yellow with a reddish mouth, but the eyes are simple red dots. For the most part the paint is fairly clean, but you can see elements of the "muddled" paint applications that McFarlane would turn into a trademark of the line.  The interior of the arm (the cybernetic portion showing when Tremor "punches" is a very nicely applied tampographic of some kind featuring lots of detail. 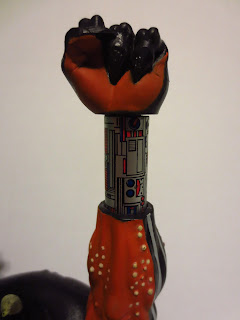 Tremor doesn't include any traditional accessories.  His hands aren't really sculpted to hold anything, either. He does come with a comic book that details a bit about his past and his first encounter with Spawn.  It's pretty decent for a comic that came with a 90's action figure. 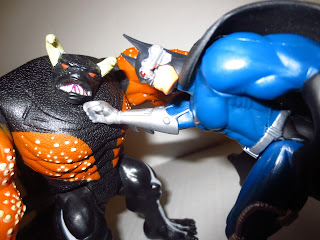 There are a good number of things I like about Tremor- I like his action feature, his paint work, and some of his sculpting. On the other hand, he has some sculpting that hasn't held up well, and suffers from some poor articulation. His hip joints feel fragile, which brings back the reason I wasn't allowed to collect most Spawn toys when I was younger: they often broke quite easily.  The device that held Spawn's cape snapped quite easily, Violator's horn snapped off, Clown's arm broke, and I fear that eleven year old Barbecue17, as careful as he was with his toys, might have experienced a broken Tremor if he had owned him.  That being said, my Tremor hasn't broke yet and I doubt most of you who decide to run out and buy Tremor aren't going to be playing with him too heavily. Being part of the first series of McFarlane's Spawn figures, he's an interesting piece of action figure history, but certainly not one most folks will feel compelled to own. I give him a good. If for some reason you're a huge fan of Tremor (not to be confused with the film Tremors), or you're a Spawn completist, snag him. Otherwise, there are far better Spawn figures available.
We've built up a small body of Spawn and McFarlane Toys Reviews:  I've reviewed Jessica Priest and Al Simmons from the Spawn: The Movie line. Other McFarlane toys we've reviewed are Cortana from Halo 4 and the Black and White Michonne with Pet Walkers 3-pack from the Walking Dead line. While Big Bad Toy Store doesn't have Tremor in stock right now, they do carry a ton of other McFarlane stuff.