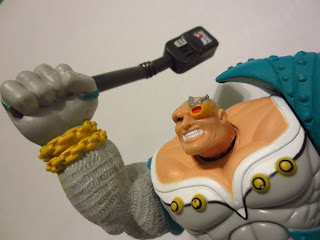 Overtkill (also known as Overt-Kill or Overkill) is another modified mob enforcer used by Don Tony Twist to try and kill Spawn.  Released at the tail end of 1994 as part of the first series of McFarlane Toys' (then Todd Toys) Spawn action figure line, Overtkill has a special place in action figure history simply because he was part of that first line of "Ultra Action Figures." As a kid, the only Spawn figures I owned were Spawn himself, Violator, Clown, Spawn Alley, and Overtkill here. From that first series, I experienced far too many broken figures and pieces, so I think my parents just stopped buying me Spawn figures. It wouldn't be until the Spawn: The Movie line in 1997 that I bought anymore figures of Spawny guy. I remember really liking Overtkill as a kid, however. I was invited to a sleepover birthday party where a friend asked me for Spawn toys, so I got him Medieval Spawn and Tremor. I ended up being allowed to pick up Overtkill, too, for myself. I don't know what happened to my childhood Overtkill (probably sold him at a yard sale), but when I bought this figure just recently, I was still impressed by how heavy he was. Ready for a big dash of meanness straight from the 1990's? Then join me after the break.... 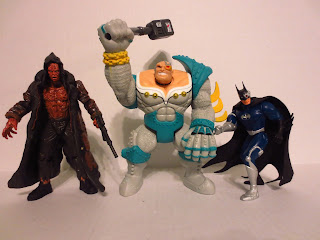 Standing fully erect, Overtkill is about 6 1/4 inches tall from the bottom of his feet to the tips of his gigantic shoulder pauldrons (can you tell Rob Liefeld co-created him along with Todd McFarlane?). He's a big nasty guy that still has a bit of a cartoonish vibe to him. Despite the considerable increase in detail over most other figures of the period, Overtkill still would fit in well with more animated lines like Teenage Mutant Ninja Turtles or even Batman: The Animated Series. 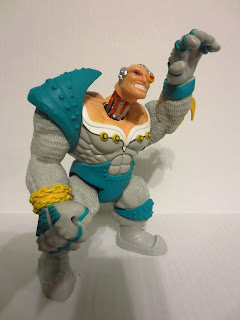 Overtkill only has four points of articulation: swivel hips and swivel shoulders.  Everything moves nice and solidly, although there isn't much forward movement in the hips.  The head doesn't swivel, but it does fire. There's a tiny white button on Overtkill's back, and when you push it straight in, his head fires from his body. It's a very, very cool action feature, and while it probably cost us the swivel neck joint, it's well worth it.  Overtkill can easily stand on his own, which is always a plus. 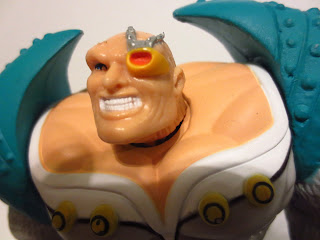 I think Overtkill's sculpt is quite impressive. First, you'll notice this dude is huge. I mean, he's massive, heavy, and muscular. He definitely has some ridiculous proportions (he looks like a boss from a Nintendo game), and lots of extreme details, such as a chain wrapped around his right wrist, blades on his left arm, and four little orbs on his chest.  He has some giant pauldrons, and his kneepads, gauntlets, and boots look like medieval armor. There are tons of little rivets on those pieces, and the arms and legs look like they're covered with chain mail.  The headsculpt is full of character, too, with a nasty grin on his face. 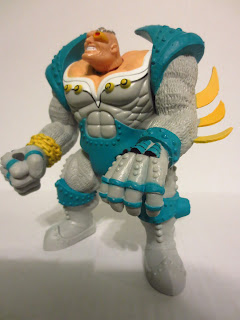 For being a big, bad, dude, Overtkill is pretty colorful. Not that there's anything wrong with that. I simply comment because the first thing that comes to mind when thinking of McFarlane's Spawn figures are the fact that they typically came in darker colors. There was even an installment of the webcomic Shortpacked where a random collector whined about how other companies used cheap colorful plastic while McFarlane always used the more expensive black plastic. Anyways, Overtkill is molded in light gray plastic and covered with blue and yellow details.  The colors do pop, but there's a lot of slop and paint bleed.  Overtkill's visible skin on his torso looks kind of weird, almost as if the paint is starting to change color.  The paint job is impressive from a few feet away, but when you get closer, you'll notice many flaws. 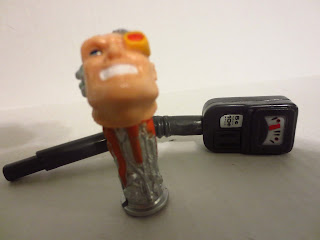 Overtkill has two accessories as well as a comic book included with him. It's a decent read, especially for a book that came with a toy. For actual accessories, I probably need to mention Overtkill's head. As mentioned earlier, it is capable of being launched from his body like a missile. Instead of a spine, there's a large metal column covered with bits and bobs of circuitry. There's also what looks like various strings of muscle and flesh hanging down from the top of Overtkill's head. Pretty nifty (and gory) little detail that 11-year-old me just loved. I was a big fan of the Kenner Terminator figures, and this just seemed like a cool next step. The head can stand straight up on the cylinder's base if you so desire. I know I always pretended that Overtkill could "eject" from his body, fly around shooting lasers from his eye, and escape to take on a new body in the future. 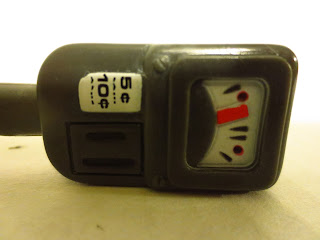 He also comes with an accessory that I remember being particularly impressive as a kid: a bent parking meter. I used to stand this around Spawn Alley and have Overtkill pick it up to give old Spawn a beating when necessary. It's a really cool plastic parking meter with a bent shaft and some solid sculpting: there are holes for coins, little screws, and even the time meter. There are some nice paint apps as well, and you can see this thing takes both nickels and dimes. That is old school! 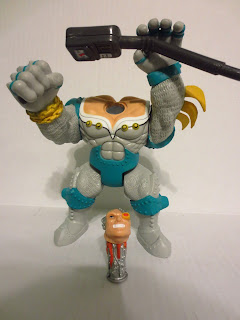 While Overtkill's paint is messy, he's easily my favorite figure from the first series of Spawn. His size, accessory, and missile-firing head all make for an insanely interesting and extreme figure. He might not be the best figure in the first series, but I like him. I don't know if I think he's the best representation of what McFarlane was doing differently with action figures through Spawn series 1, but he's definitely a good example.  I'd give him a great in this journey on the Action Figure Time Machine.

Lately I've taken a real interest in looking at the progression of action figures in the 1990's and early 2000's, so we've built up a small body of Spawn and McFarlane Toys Reviews:  I've reviewed Tremor from Spawn, and Jessica Priest and Al Simmons from the Spawn: The Movie line. Other McFarlane toys we've reviewed are Cortana from Halo 4, and the Black and White Michonne with Pet Walkers 3-pack from the Walking Dead line. While Big Bad Toy Store doesn't have Overtkill in stock currently, they do carry a ton of other McFarlane stuff.

Barbecue17 features a removable head. Unfortunately, he can only use that action feature once. When he's not playing with parking meters or buying toys, he sometimes takes pictures of them and puts them on his Flickr account.