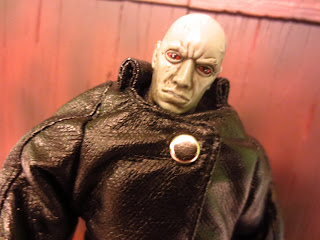 The T-103, also known as Mr. X, was certainly the more fearsome of the big baddies in Resident Evil 2.  While William Birkin was a larger and more grotesque creature, Mr. X was creepier. He walked slowly and seemed more methodical in his approach to hunting you down throughout the game.  Released in Toy Biz's "Video Game Superstars Presents: Capcom's Resident Evil 2 Platinum", this figure includes snap-on pieces which allow him to change from his trenchcoated Mr. X form into his "Super Tyrant" form.  This isn't the only figure of this character to be released, but it was the first. Palisades did release a version of Mr. X in their second series of Resident Evil figures, and Moby Dick released both Mr.X and the Super Tyrant as two separate releases, but we're looking at Toy Biz's effort today, so here it goes!

Mr. X measures in just a little under 7 and a 1/2 inches tall. While some of the Toy Biz figures have a slightly anime style to them, Mr. X seems to capture a bit more of a realistic look.  He's very creepy and utilizes multiple removable pieces to give him two distinct looks. 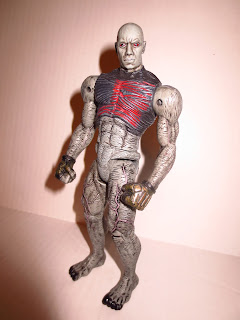 While Mr. X typically only has two motions (walking slow and lunging for a kill), you should be able to do a bit more with this figure. Mr. X features: hinged knees, swivel hips, a swivel waist, ball jointed shoulders, and a swivel neck. It's not the most substantial articulation, but it all works well. You should definitely be able to pose this guy how you want, though, since he's not known for being super athletic. the ball joints are impressive considering this was released in 1999. 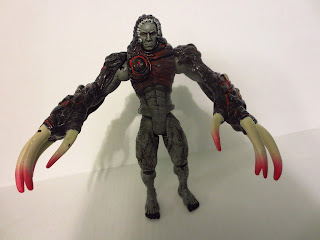 Once again, Toy Biz really delivered some solid sculpting on this line.  Underneath either the Super Tyrant parts or the Mr. X trench coat and boots is an excellent generic Tyrant body.  It's much more "normal" than the Tyrant from the original Resident Evil, and looks like a very muscular corpse, similar to Frankenstein.  The toe nails are long and curled and the legs are bulging with veins.  There's some excellent texture to the body that really lends itself well to the paint wash given to the figure.  The torso features a different pattern that is more sinewy; this is to help the Super Tyrant mode of the figure look better when the jacket is removed and the additional parts are added on.  He's wearing gloves that feature some armor on the back of the hands, which are balled up into fists.  The headsculpt is dead on. It's neutral, but neutral in a very creepy, augmented way.  Mr. X didn't show too much emotion in Resident Evil 2. 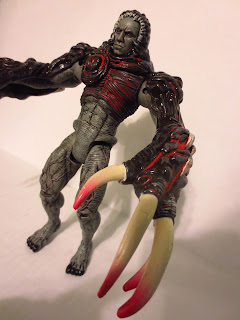 Most of Toy Biz's Resident Evil creatures featured strong paint work, and this guy is no exception. From head to toe, Mr. X is covered with a dark paint wash that brings out every little detail. The body is an excellent pale gray which is nice and corpse-like, and is accompanied by great attention to detail on small things like his blood red eyes and the various veins popping up all over.  The boots (removable) and the gauntlets on his hands are given a metallic paint coat, and feature dry brushing to give them the appearance of actual metal. It's an effective technique and looks great overall. The paint work on this guy is just solid all around. 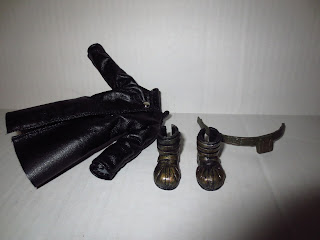 All of his accessories are used to create the two distinctive looks for Mr. X, and they're all really well handled.  For creating the Mr. X look, the figure comes with a removable trench coat, a pair of boots, and a belt.  The trench coat easily fits on the figure and is made of a black material that looks like leather.  It features two buttons on the inside (be careful with the snaps) and a metal button on the outside for looks.  The belt looks like a fairly standard military "pistol belt" with a pouch on the left side. It's made out of a flexible rubber and snaps in the back. There's even a drybrush paint app on the belt to give it a more weathered look.  The boots fit nice and tight over Mr. X's feet, and are fairly easy to put on and take off.  My only problem with this look for Mr. X is that the trenchcoat looks a little too short.  It only goes to his knees, when really it should go down to his mid calves in order to cover the tops of his boots. Seeing the bare legs visible between the boots and jacket makes him look a bit like a stereotypical flasher. 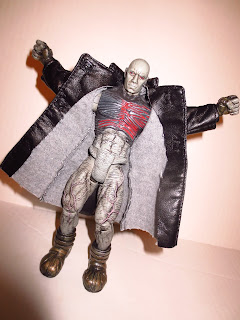 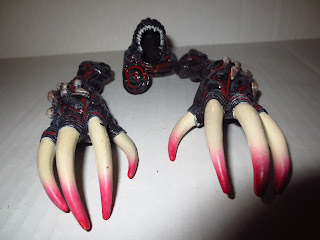 The pieces to turn Mr. X into the Super Tyrant are two arm attachments and a hood that goes over his head and upper tors. They're all made of a fairly flexible plastic and are easy to snap on and off.  The sculpting is really good on the pieces and there's some great paint work to give the pieces an organic feel. The only problem is that at certain angles, it's easy to see Mr. X's original arms underneath his new mutated limbs.  Other than that, he looks good and the pieces do little to impede articulation. He's loaded down, and both looks work equally well.

Overall, this isn't my favorite version of Mr. X, but it is my favorite version of the Super Tyrant.  Moby Dick's is larger and has articulated fingers, but it's really not as detailed as Toy Biz's version. (My favorite of Mr. X is Palisades' version, by the way.)  Toy Biz did a really good job of creating a good solid figure who looks great in either of his two costumed looks, and honestly looks good without those pieces as well.  It's a real shame they never got to release toys for Resident Evil 3: Nemesis because they probably would have released a really cool Nemesis. Overall, I'm going to give this toy a Great. For being released in 1999, he holds up remarkably well. 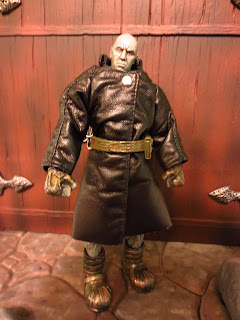 Barbecue17- he's the master of unlocking! Visit him at his Flickr page.