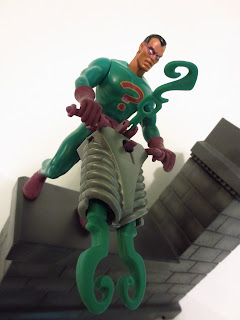 While I just picked this figure up recently, I briefly owned a Legends of Batman Riddler for one night during the summer of 1995.  When I was just a young lad and ignorant to the ways of the world, I found myself anxiously awaiting the release of Batman Forever.  Not only would Robin be in the film, but Jim Carrey would be playing the Riddler.  Knowing that there was a Riddler figure based off of Jim Carrey out in the Batman Forever line, I was frantic to find it! I would sometimes call my dad at work and ask him to check the toy aisles at the retail store he managed. One day he finally found the Riddler. "Does it look like Jim Carrey?" I asked him. "Yeah, I guess," he replied.  Turns out, it wasn't the Batman Forever, but the Legends of Batman. I probably asked if I could keep him, but ultimately the Riddler got returned to the the store the next day.  Interestingly, the package claims that this Riddler figure is a result of Bane injecting Riddler with Venom. He doesn't really look all 'roided out, but who knows? Maybe you'll find out after the break.... 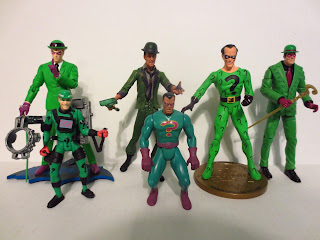 The Riddler is only a hair over 4 1/2 inches tall, although his true height is difficult to tell since he's in a weird crouch, almost as if he's getting ready to enter a limbo contest.  This makes him a bit shorter than the other figures, but still in scale.  Once again, we're looking at a more dynamic version of the character than seen in earlier lines such as Batman: The Animated Series and Super Powers. 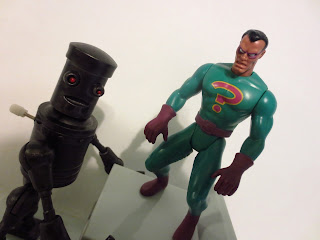 The Riddler doesn't have the standard Kenner 5 points of articulation. Well, he does, but the neck is a bit unusual. He has swivel hips and swivel shoulders, but his neck is actually hinged, allowing it to move back and forth. While I imagine this was done to allow the Riddler to hold his large weapon in a few different poses, it also allows him to headbang. Kind of.  He's in a weird pose that seems slightly suggestive if he's not holding his gigantic missile launcher. Actually, this toy is kind of creepy.  Actually, he'll hardly stand straight, even when using his giant cannon for balance. 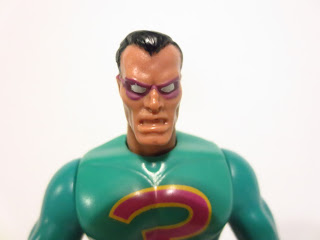 The Riddler has a pretty plain sculpt. He's as muscular as nearly any other superhero you can imagine and is decked out in his spandex suit, probably to show off all those muscley muscles.  Since the suit is spandex and skin tight, there isn't much detail. There's a simple belt sculpted on the Riddler's waist, and he's wearing some gloves that are just a  bit oversized.  Interestingly, I think this version of the Riddler bears some resemblance to Frank Gorshin, the late actor who most famously portrayed the character in the 1966 Batman series.  The face is definitely sculpted with a crueler grimace than Gorshin, but the hair style and shape of the face are quite similar.  The Riddler is wearing a domino mask, and the string holding the mask on is sculpted the entire way around the head.  Interesting detail that I don't recall seeing any other figure wearing a domino mask having. 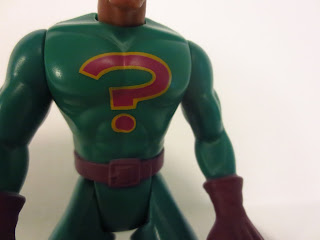 He's the Riddler, so he's got to be green, right?  Yup, and this Riddler is two shades of green, although I'm not sure if it's intentional.  He's a darker, almost bluish green, and his arms are noticeably darker than his torso, which seems to be a truer green.  Perhaps this is due to the Riddler's limbs being molded from a softer plastic than his torso or simply because of time, but it's noticeable in person and a bit off-putting.  He's also got lots of purple on him, as his belt, gloves, and boots are a flat purple. The edges are a little messy, but his domino mask is cleanly applied. He has a question mark outlined in yellow on his chest that appears to be a tamp stamp. It's nice and clean, too. His mouth is wide open, so I wish he had either some red or white paint there, but he doesn't. 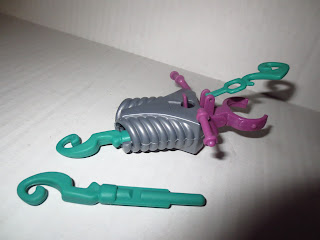 The Riddler comes with one accessory: a "firing question mark launcher." It's actually a pretty neat and complex accessory made up of multiple smaller parts.  It's a pretty decent sized silver missile launcher with two green question mark missiles popping out of the barrels. Push a small purple tab, and one of the question marks goes flying. The other is permanently attached in place.  Riddler holds the launcher by attaching a purple belt around his waist and holding the two purple handles.  There's also a folding green question mark that acts as a targeting sight.  The launcher itself is very cool, but it's difficult to find a way for Riddler to stand while holding it.  You literally have to lean him back like Neo in the Matrix dodging bullets to get him balanced.  And now the figure looks even shadier. 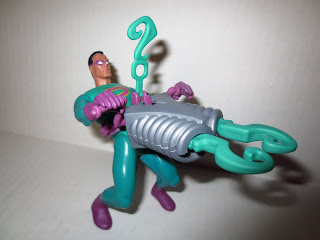 Riddle me this: what do you think I'll say about the Riddler? Honestly, I'm not very impressed. He looks OK, if a bit plain, and I do like the head sculpt and accessory. I dislike how awkward the figure is, however. He cannot stand well with or without his weapon, and looks awkwardly posed in any situation.  I really like some of the villains in this line (I haven't reviewed them yet, but both the Joker and Catwoman are fantastic figures) but Riddler doesn't reach the same level of awesomeness as those. Heck, he can't even stand up. I'm going to have to give this guy an Eh and a 1/2. The 1/2 is simply due to the Gorshin-esque head sculpt. Perhaps my parents did me a solid by taking this figure back to the store when I was a tyke. Thanks, mom and dad! 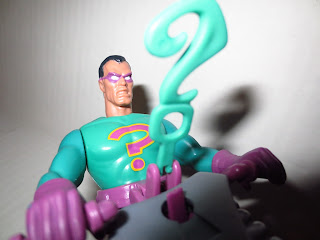 I've reviewed two other Legends of Batman figures: Nightwing and Knightsend Batman, and I've got plenty more on the way. The Epic Review has also reviewed:  Batman from Young Justice Invasion,  Arctic Shield Batman from Mattel's Batman line, Talia al Ghul from DC Collectibles' Arkham City, Planet-X Batman, The Dark Knight Returns Batman, and Injustice Batman from Mattel's DC and Batman Unlimited lines, Laughing Gas Joker from Kenner's Legends of the Dark Knight,  and the Dark Knight Rises Bane from Hot Toys.  Click on the banner above and you can find many of these Batman figures (and others) at Big Bad Toy Store.