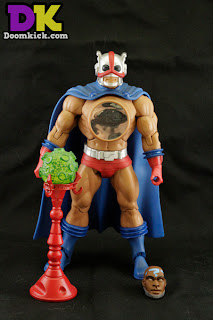 Strobo is one of the only Masters of the Universe Classics figures that I don't own yet.  He's the MOTUC traveling convention exclusive for 2013, and will be available at places like Power-Con and New York Comi-Con.  He was available briefly on Mattycollector.com for subscribers, and hopefully will be available again near the end of the year.  DrRampageo wrote up a great review of this figure over at DoomKick, so head on over and check it out! More details about the character after the break.......


I really, really want Strobo. While he only appeared in one comic in the Masters of the Universe Magazine, "The Dark Power of Skeletor," he was seemingly planned for the original toyline as his design reused multiple pieces such as Zodac's head and Sy-Klone's torso. I love these obscure characters who legitimately appeared in some form of media, no matter how obscure. Plus, he also has a second portrait for Zodak that features his unhelmeted head--an homage to the 200x Zodak figure (which is most definitely one of the best figures in the 200x line). I love the Cosmic Enforcer characters, and can't wait to add another one to my shelf! Strobo is a perfect example of how the reuse of parts with just a few new added elements can truly make a very unique figure. Once again, head over to DoomKick to read the full review.