Netflix for the Poor Kids: Bad Kids Go to Hell (Confirmed: Good and a 1/2) 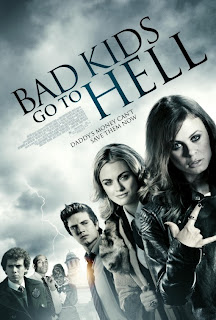 I'm not sure where I first heard about the film Bad Kids Go to Hell.  It's based on the comic book of the same name, authored by the film's director Matthew Spradlin, but I wasn't at all familiar with the book prior to seeing the film.  Anyways, the simplest way I can put it is that Bad Kids Go to Hell is The Breakfast Club meets Scream. (It even has Judd Nelson in it).  Six students at the prestigious Crestview Academy are sentenced to spend a day of detention locked in the school's new library and write a report on the school's history.  Did I mention the library was built on sacred Apache land?  And one of the students claims to talk to her dead parents daily?  Bad Kids Go to Hell doesn't have a terribly original premise, but it does make up for that with some truly amusing dialogue, some solid performances, and a plot that didn't play out how I expected it to.  Read on for more of my opinions after the break....


As I started watching the movie, I really didn't expect to like it.  The title is catchy and drew me in but the first 10-15 minutes of the movie didn't give me much confidence. It seemed like it was either going to be a fairly standard psycho killer film where a group of bratty prep school students get killed one by one.  Once the school psychologist, Dr. Day (Jeffrey Schmidt) and the janitor, Max, (Ben Browder) have locked the students in the school's library for their eight hours of detention, the movie really starts to find it's footing.  All of the students know each other and have something against the group's resident outcast Matt Clark (Cameron Deane Stewart), who comes from a non-wealthy background and has wronged each of the other students in some way.  Then, as a storm begins to rage outside, they begin to suspect that the library is actually haunted by a vengeful spirit. After a seance goes wrong, the remaining students must desperately escape before they become the next victims.
The film never takes itself too seriously, and neither do the actors.  Bad Kids Go to Hell really is a very self-aware film, mixing together the teen films of the Brat Pack era and dark comedic within the genre of the horror film. The students aren't merely expendable extras, and each gets a chance to shine. Tarek (Marc Donato) is an awkward but intelligent Eastern European student who is terrified of his father. Tricia (Ali Faulkner) basically "owns" the school due to her mother's social influence.  Craig (Roger Edwards) is a star athlete who suffers from a broken leg he blames Matt for.  Megan (Amanda Alch) is the over-achiever who is wound up far too tightly. And there's Veronica (Augie Duke) who's into seances, spirits, and causing trouble for everyone else. While some cast members are stronger than others (Alch and Duke really stand out) there's a good chemistry between the group that allows for moments that are equally tense and oddly hilarious.  Some of the story is told through flashbacks, and Judd Nelson is hilarious in his all too brief role as the all business headmaster of the school.
If you're a fan of horror films who is willing to give a film with a smaller budget a try, or if you enjoyed the comic or other books like Morning Glories, then Bad Kids Go to Hell could be right up your alley. It's not an outright terror fest, but it certainly is an entertaining hour and a half diversion that might just surprise you.  It's available on Netflix, On Demand, and DVD, so there are plenty of ways you can catch it.  It drags a little at a few points and has some odd editing, but I had a bloody good time watching it overall, and now have an interest in checking out the comic and the upcoming sequel, Bad Kids Go 2 Hell.

Confirmed: Good and a 1/2--If you like indie horror movies and have an interest in the film, why not?