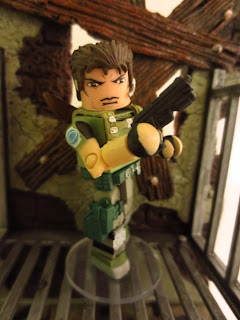 I have quite a few Minimates, (the Ghostbusters Minimates are my favorite Ghostbusters toys ever!) but haven't reviewed any for the site yet. Since it's Resident Evil Week, I thought it would be appropriate to review the lone Resident Evil Minimate I own: Chris Redfield from the second wave of Marvel Vs. Capcom 3 Minimates.  Released in March 2012 in both regular comic shops and as part of a Toys R Us exclusive wave, Chris Redfield brought a touch of zombie killing action to the fighting game series.  While Chris came packaged with a Spider-Man figure, I don't own him--Epic Review Contributor Andrew does.  He wanted Spidey, I wanted Chris, so we split the pack. Didn't that seem to work out nicely?  Anyways, if you want a review of Spidey, you'll have to ask Andrew. If you want a review of Chris, I'll be happy to oblige. Here we go.....


﻿
Your standard Minimate is about 2 inches tall. Chris' hair makes him a little taller, about 2 1/8th inches, but he still fits in with the rest of the other Minimates size wise and stylistically.  They're all built out of a standard body adorned with different paint decos and additional sculpted pieces to create a wide variety of characters. Chris is patterned after his appearance in Marvel Vs. Capcom 3, which uses his Resident Evil 5 appearance. 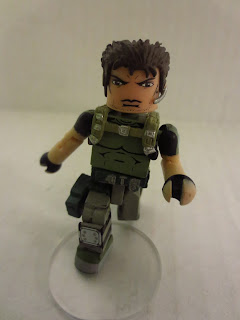 Minimates are very highly articulated for minifigures. Chris features: swivel ankles, hinged knees, ball jointed hips, a swivel waist, ball jointed shoulders, hinged elbows, swivel wrists, and a ball jointed head.  Yes, all of those joints are on a 2 inch tall figure. They also can almost all be easily disassembled in order to make LBCs (lazy boy customs) of anything you want.  While some of the joints can be a little limited in movement (the thighs come to mind), for the most part you can get some fun poses out of this boxy little guy. 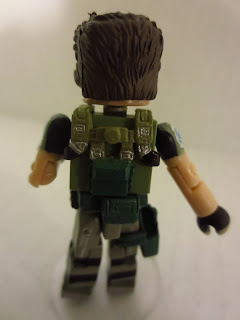 Since Minimates largely use the same bodies, paint details and additional added pieces make up most of the sculpt.  Chis features quite a few extra little pieces that characterize the figure.  The holster on his right hip can actually hold his pistol and has visible straps and snaps.  His belt and web gear harness are also two separate pieces over the regular flat body that feature lots of pouches, buckles, and even the tracking device he uses.  Lastly, Chris' hair is a separate piece that has some nice sculpting and a microphone to Chris' earpiece. 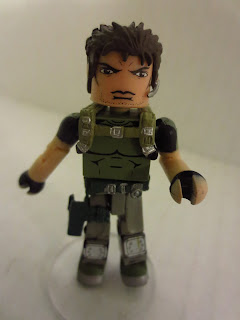 The paint largely makes the figure, and it is impressively both quite simple and clean.  The knee pads are pretty detailed, though, while the rest of the details like the B.S.A.A. logos on his shoulders and the muscles on his torso are simpler.  The face is cleanly painted on the cylindrical head and definitely looks like a stylized version of Mr. Redfield, down to the stubble.  Chris is too busy killing Majini to shave! 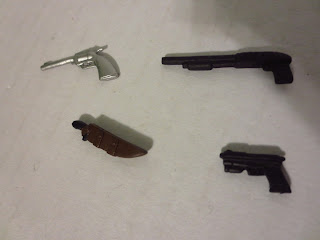 Chris comes with five accessories: a pistol, a shotgun, a revolver, his sheathed kukri, and a stand.  The stand is a smaller clear disc that features a peg for Chris' foot. I wish all Minimates had come with stands, but I'm glad Chris does. Stands are always awesome in my book.  The pistol fits in a holster on Chris' right leg and is fairly detailed with a little flashlight/laser unit under the barrel.  It's pretty small and hard to tell if it's the Beretta M92F, Heckler & Koch P8, or Sig P226 from the game. It fits easily in either hand.  The shotgun is the Ithaca M37 (which upgrades in-game to the Hydra), a pump action shotgun that can clear out multiple Majini at once.  The revolver looks like the S&W M29, but it's huge. I mean not intimidatingly massive, but too large for the figure.  Chris can barely hold it and it looks under-detailed, unlike the rest of the weapons. The sheathed kukri isn't removable from it's sheathe, but does snap onto a peg on the back of Chris' web gear. While the revolver is disappointing, the other accessories are quite cool. 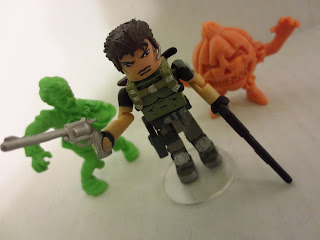 Minimates almost always manage to make characters recognizable with just a few small details and some good paint work. Chris here is no exception. He's an excellent Minimate and a fun trinket for a Resident Evil fan to have on his or her shelf.  As far as Minimates go, he's easily a Great and a 1/2 with mostly great weapons, some cool sculpted details, and great paintwork.  I just wish Diamond Select would try to get the Resident Evil license so they can create more, as I'd buy nearly every character they could make!