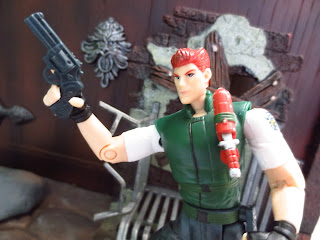 In preparation for Resident Evil week at ThEpic Review (July 22nd through July 26th), here's a review of an oldie, but a goodie: Chris Redfield & Cerberus from Video Game Superstars Presents: Capcom's Resident Evil. Yup, that series of toys had a darn long name.  Released in the late summer of 1998, at that point the original Resident Evil had been out for well over two years and Resident Evil 2 had been out for at least 6-7 months. Still, Toy Biz seemed to know that the series was becoming a franchise and put out a nice mixture of figures from the first two games. Chris Redfield and Cerberus came packaged together in the first series, and as one of the two main protagonists from Resident Evil, Chris was a pretty popular figure. I didn't get this guy until sometime in early 1999 and remember loving him, despite his faults. Let me say that: I love this figure, but boy does it have some faults.  Remember that as you read this review, if you dare.... 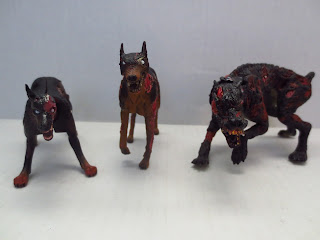 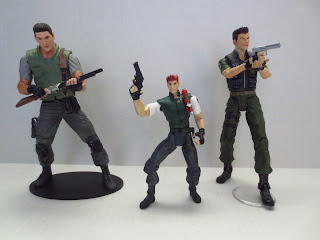 For their Resident Evil line, Toy Biz went with a 5 inch scale. Chris measures just a little over 5 inches and Cerberus, the T-virus infected doberman, is 2 1/2 inches long and about 2 1/4 inches from the pads of his feet to the tip of his ear (he's only got one left).  Most figures were sold two to a pack, typically including one traditional human-sized figure and one creature of some kind, although there were some exceptions. 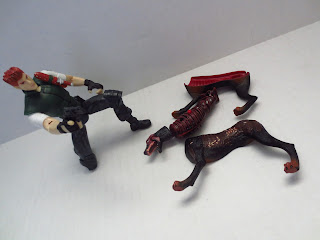 Chris is fairly well articulated. He features: hinged ankles, hinged knees, swivel hips, a swivel waist, true ball jointed shoulders, hinged elbows, and a swiveling neck.  All the joints work pretty well, although the ball jointed arms do fall off fairly easily.  Yeah, it's kind of a bummer. I actually own three Chris Redfields (three of this exact same figure--don't judge me) and all three have the problem. One or two even have remnants of glue on them, like Toy Biz tried to use glue to keep them in place.  The second problem with the figure has to do with the action feature. When you push down on a lever on Chris' back, he's supposed to turn his head to the right and raise his right arm. The amount of motion you get from this move is more of a twitch than an aim and shoot. Lastly, his legs are wonky.  He's sculpted to be in a bit of a lunge with his right leg out, but the joints are aligned in such a way that he often falls over.  Like I said, I have a great love for the figure, but he's highly disappointing in regards to articulation and quality. I will say that perhaps the coolest feature about this figure's articulation is that he can actually be put into an excellent crouching position.  Even newer figures with double jointed knees and ball jointed hips have difficulty with this stance, but Chris looks great in it.  Cerberus only has one point of articulation: his jaw is hinged. But it won't stay closed. He also has an action feature. His head is attached to his ribs and tail and the halves of his body snap together over it. When you push down on his head, he's supposed to explode as if he just got shot.  Well, my Cerberus' (I think i have four of this exact same version) fall apart just fine without the button. In fact, it takes a lot of work to even stand them up closed.  It's a good idea for an action feature, but it's been poorly executed. 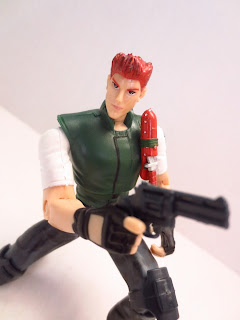 Toy Biz went with an anime-influenced look for the humans in the Resident Evil line, which certainly helps them stand out from the various zombies and creatures. Perhaps this was to give more contrast to buyers between the good guys and the bad guys?  The head sculpt is a bit stylized, with a stern expression and some spiky hair.  The outfit is fairly plane, but matches the art you see in the game's manual well.  Lots of little wrinkles and folds in the cloth, as well as details like Chris' two belts, a small pouch on his side, and his knee pads, which are actually separate pieces. 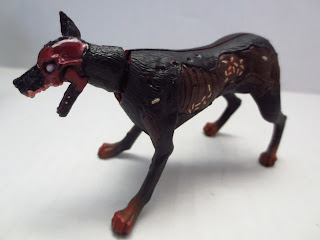 It's Cerberus that really shines, though; his whole body is a mass of exposed muscles, torn flesh, and visible bones.  Little maggots are sculpted all over the outside (and inside) of the figure.  The little bony tail is also really creepy, as is the exposed left eye socket. 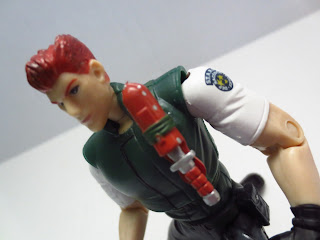 The paint work was pretty strong on most of Toy Biz's Resident Evil figures, and Chris and Cerberus  here are no exceptions.  Chris's outfit matches the colors of his in-game appearances and character art appearances pretty well.  His vest is a deep green, the sleeves are white (with a cool STARS logo on his left shoulder), and his pants are grey with a dark black wash. I'm not sure if Toy Biz was going for a certain material type or just some depth added to the figure, but it looks OK.  Small details like the green straps and silver snaps on his knife sheathe are also well done. It's interesting to see Chris with brighter red hair. I always forget that Chris' hair was originally more of a reddish color rather than the brown hair he's been portrayed with since Resident Evil: Code Veronica. 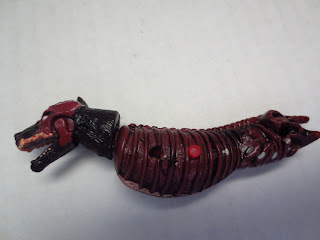 Let's look at Cerberus' paint: it's nasty, but in a good way.  Cerberus' paint comes from the "McFarlane School of Muddy Paint", which means that multiple characters are muddled together to give a figure a specific look. While the regular fur of the Cerberus has the regular black with brown markings of a Doberman (I'm doing my research--I have a kind-of Doberman sitting about 3 feet away from me while writing this), the exposed parts of the figure are done in various shades of red with muddy brown and black washes all over.  Little yellowish white maggots cover the figure too, giving the figure an impressively gory look. 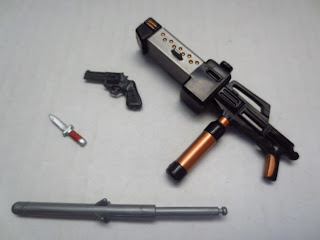 Here's perhaps one of my favorite parts of Toy Biz's Resident Evil line: wicked cool accessories. Resident Evil is about zombies, monsters, and using cool guns to kill said zombies and monsters.  Chris comes with a decent little arsenal. First, he comes with the knife, his starting weapon in the original game. It doesn't fit in his hand well, but it tucks securely into his cool shoulder sheathe and has a nice red handle.  Secondly, he comes with a revolver.  In Resident Evil, this weapon was identified as a Colt Python.  You could obtain it after inserting two gems into the tiger statue's eyes in the regular game and it was a death dealing machine.  It's a nice, detailed little sculpt and fits securely in either hand, but looks better in the right hand due to his trigger finger.  Last, but not least, Chris comes with the flamethrower. The package calls it a rocket launcher, but it's definitely the flamethrower from the game. Look at the canister for fuel! It's very much modeled after the flamethrowers from Aliens, and is a nice detailed accessory. It's a bit oversized, but it features great sculpted detail and a few different paint apps.  It's also designed to fire a missile, which it does well. The thing I've always found funny is that Chris's flamethrower shoots a missile and Jill Valentine's grenade launcher shoots a flame. Maybe those should have been reversed?  Cerberus doesn't come with any accessories, but it could be argued that he is really a larger accessory for Chris. 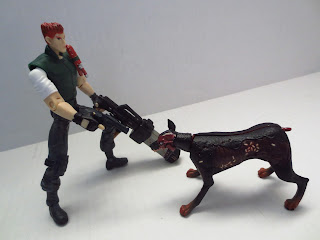 I really, really like this figure, but it's got so many problems that I can't rate it above an Eh and a 1/2.  If just the "look and draw" action didn't work, I could ignore that, but the wonky standing articulation and fact that Cerberus can't even stay together really hurts the score.  An exploding body was a feature that Mattel managed to give Blast-Attak in 1987 and that Kenner had perfected in their Aliens and Terminator 2: Judgment Day lines, so it's disappointing that Toy Biz couldn't pull it off. It's really a shame because the sculpt, paint, and weapons are all fantastic. I'm glad to have finally completed my Toy Biz Resident Evil line last month, but despite being perhaps the main character of the Resident Evil franchise, Chris isn't a standout of what was best with this line. Confirmed: Eh and a 1/2.

I've looked at a few Resident Evil figures recently, and will look at plenty more during Resident Evil week at The Epic Review (July 22nd- July 26th).  I've reviewed William G-3/ William G-4, William and Sherry Birkin, and Mr.X/ Super Tyrant from Toy Biz's Resident Evil figures.  ThEpic Review has also taken a stick and prodded at the following zombie toys: Black and White Michonne with Pet Walkers 3-pack from McFarlane's Walking Dead line and the Assemblage Zombie from Valerobots.  Of course, if you want someone to kill those zombies, I also looked at S-Mart Ash from NECA's Cult Classics.  Big Bad Toy Store has this exact figure in stock as well as plenty of other cool Resident Evil figures and props from a variety of companies.