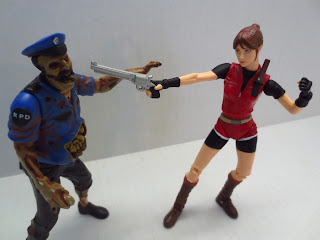 This is hands down my favorite figure from Toy Biz's Resident Evil line: Claire Redfield and the Zombie Cop.  In early December of 1998 my cousins came to visit for a few days and brought their Playstation with them. I'm not sure they brought any games, though, so we went to Blockbuster to rent Resident Evil. Unfortunately the game didn't work, so we had to take it back and rented Resident Evil 2 instead. It's still one of my favorite games, and definitely a high point in a series that has had many, many high points.  It was enough to make a Nintendo fanboy (at the time) ask Santa Claus (actually, I asked my grandma) for a Playstation.  I got my Playstation for Christmas in 1998 solely because I was enamored by Resident Evil.  Sure, I wanted to play Metal Gear Solid and Final Fantasy VII also, but Resident Evil was what I really wanted.  For Christmas I got Resident Evil, Parasite Eve, Medievil, and Metal Gear Solid.  It wasn't long after Christmas that I ended up buying both Resident Evil 2 and this figure.  Released in late 1998/ Early 1999, Claire was part of the second wave of Resident Evil figures produced by Toy Biz, a toy company for their various Marvel action figures.  I'm going to absolutely gush about this figure because I love it so much, and you can join me after the break, if you'd like. 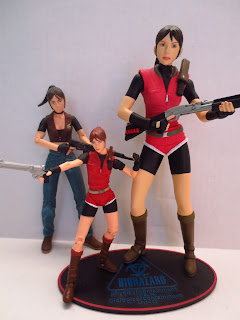 Standing straight up, Claire is about 5 inches tall, while the Zombie Cop is just a tad bit shorter.  While Claire has the more animated look that the (living) humans in the line have, she's much less animated than Chris and Jill from the first series.  The Zombie Cop is fairly realistic, especially in comparison to other 5 inch figures from the late 90's. 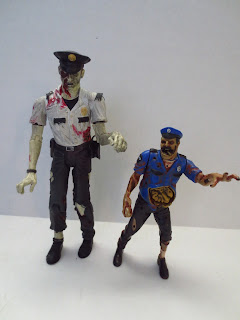 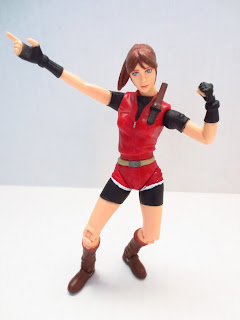 Claire features quite a few points of useful articulation: hinged ankles, hinged knees, swivel hips, a swivel waist, ball jointed shoulders, a swivel neck, and a swivel ponytail.  Claire can easily stand on her own, and her good assortment of articulation enables her to take on some cool poses.  She has the "aim and point" action feature that Chris, Jill, and Leon all have, but hers works fairly decently. Pull the lever on her back and she does look to her right and raise her right arm. It's not perfect, but it is kind of cool and doesn't interfere with her movement. Plus, ponytail articulation. That's rather unusual, no? 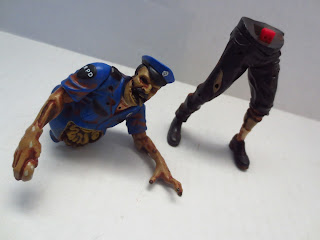 The Zombie Cop isn't as articulated as Claire, but does he really need to be?  His shoulders are swivel joints and that's about it, so he can raise his arms to grab any nearby humans or let them hang at his side. He does have a very cool action feature, however: Push in on his visible intestines (or shoot it with Clarie's crossbow) and he his torso separates from his legs.  It's actually something that happens in the game and makes a neat alternate way to display the figure. 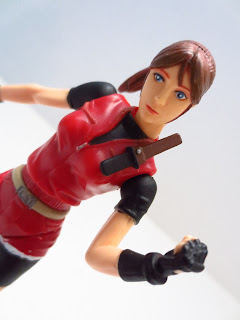 Toy Biz really did some nice sculpting on their lines, and this 2 pack is a great example of the diversity they could handle, as it features both a beautiful girl and a creepy monster. Claire is, obviously, the beautiful girl, and she really is quite a nice looking figure.  She has a very clean sculpt with plenty of detail on her odd motorcycling outfit.  The addition of the knife on her left shoulder is a cool detail that visually ties her in with her older brother. The pose is quite good--while the right arm is nicely extended as if firing a weapon, the left arm is bent in a fist as if she's giving herself a cheer for successfully killing another zombie. You go girl!  She has a very pretty face. It's simple, but well done. 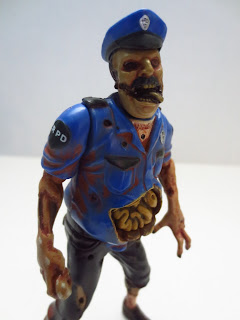 The Zombie Cop is covered in creepy details. First, he's covered with bullet holes.  Second, his police uniform is ripped and tattered. His left pant leg is ripped, and his sock and garters are showing, as well as some exposed flesh on his left leg.  There's also a pile of intestines flowing from his stomach. Pretty impressive that this figure was on mainstream retail shelves in the late 90's, huh?  I love his hand poses. The left is outstretched with missing fingers while the right is clenching a moldy doughnut.  The head sculpt is nothing sort of amazing with a creepy grimace, almost as if he has a Glasgow smile. The empty eye sockets, lolled out tongue, and bizarre angle of the neck really give the figure a grim appearance. 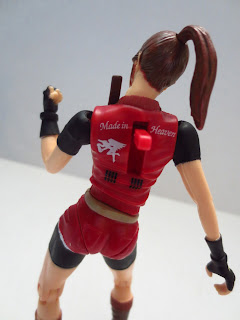 Claire's paint job isn't too elaborate, but it certainly captures her in-game look.  Her outfit is a really deep red and all of the details, like the frayed edges of her shorts and her belt, are well done and distinct.  Her eyes and hair color are perfect--I've always loved how they turned out.  On her back she has the angel logo and the phrase "Made in Heaven" like in the game. It's shifted around a bit due to the lever for her action feature, but it's there and looks fine. 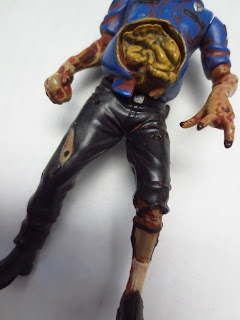 The Zombie Cop's paint is also really strong. He's got a muddy McFarlane-esque paint style going on, but it works for a zombie character.  The sculpt of the character is really quite detailed, and the paint nicely matches that. There's a heavy wash that's kind of a ruddy brown. It's not bloody looking, but it nicely accents the slightly greenish flesh tone of the figure and definitely conveys that this isn't your standard cop.  Little details on the uniform are also added, such as the letters "RPD" (Raccoon Police Department) on his badge and left and right shoulders.  There's also a tiny little RPD on the badge on his hat. Details! 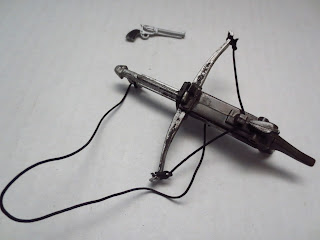 Claire comes with two accessories: a revolver and a firing crossbow.  Is the revolver intended to be the Colt SAA that Claire gets with her alternate uniform? Possibly, because that's the only revolver in Resident Evil 2. This is a great revolver for smaller action figures. It's perhaps a bit over sized for Claire, but still looks great with her (and numerous other figures I've equipped it with over the years). Her crossbow is based on the crossbow she wields in the game. While in the game it fires three arrows simultaneously, here it just shoots one very large arrow. It also has a string attached to it, perhaps for safety reasons? Anyways, it's also a bit large, but nicely sculpted with some silver paint apps that give it a worn look. 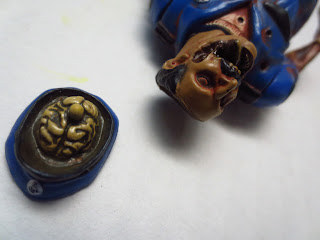 The Zombie Cop doesn't really have an accessory per say, but his hat is removable. Doing so reveals his brains attached to the top of the hat. They're yellowish with a dark wash, giving them an appropriately grotesque look. 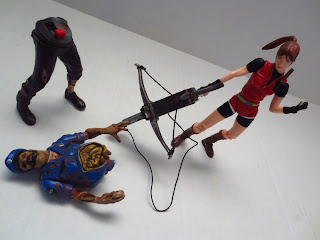 I love, love, love this set. It's probably my favorite Resident Evil product that Toy Biz released. It's got great sculpting, fun action features, and really has a nice play dynamic, as buying it netted you both a hero character and a zombie for her to fight. It really was a great example from a great line of toys. I'll be looking at more figures over the next week here on ThEpic Review, but consider this one a Great and a 1/2 entry in the history of zombie toys. 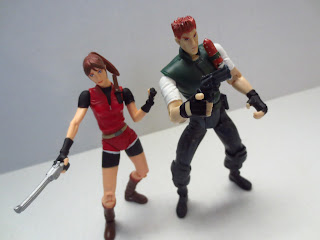 I've looked at other Resident Evil figures recently, and will look at plenty more during Resident Evil week at The Epic Review.  I've also reviewed: Chris Redfield and Cerberus, William G-3/ William G-4, William and Sherry Birkin, and Mr.X/ Super Tyrant from Toy Biz's Resident Evil  figures.  ThEpic Review has also taken a stick and prodded at the following zombie toys: Black and White Michonne with Pet Walkers 3-pack from McFarlane's Walking Dead line and the Assemblage Zombie from Valerobots.  Of course, if you want someone to kill those zombies, I also looked at S-Mart Ash from NECA's Cult Classics.  Big Bad Toy Store doesn't have this figure in stock, but they've got plenty of other cool Resident Evil figures and props from a variety of companies.