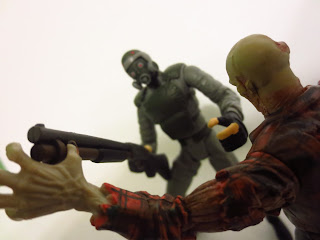 Also known as Mr. Death, Hunk was first playable in the secret Resident Evil 2 scenario "The Fourth Survivor". The only remaining survivor of the Umbrella Security Service Unit that attempted to apprehend the G-virus sample from William Birkin, Hunk has to fight his way out of the sewers of Raccoon City in order to make it to a helipad for extraction.  Hunk appeared as a figure in the third series of Resident Evil figures out out by Toy Biz in 1999, the long name for the series being "Video Game Super Stars Presents Capcom's Resident Evil 2: Platinum". Yup, just as long as ever.  Hunk is paired with a regular, average zombie, but that's perfectly fine. Average zombies are the best for hunting!  Ready for a look at the mysterious Hunk and his zombie rival? Then join me after the break...


While most of the human/ hero characters in the line have a somewhat animated or anime influenced look to them, Hunk sort of skips that due to the fact that his face is covered. His lighter colors might give him that appearance, to an extent, however. He reuses many parts from series 1's Chris Redfield, including his torso, left leg, lower right leg, and boots.  The zombie has a more realistic appearance, like most of the creatures in the line, and is also a heavily recycled figure. He shares everything but his head with the series 1 Lab Zombie.  The zombie is right around 5 inches, while Hunk is closer to 5 1/4 inches. 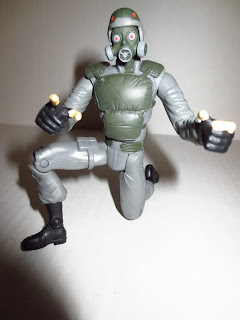 Hunk features hinged ankles, hinged knees, swivel thighs, swivel waist, ball jointed shoulders, hinged elbows, and a swivel neck. While his legs are largely the same as Chris', the new right hip piece and the tighter joints help him to stand better. This is a nicely articulated figure. As with the other humans in the line, Hunk features a lever on his back: pull it and he looks to the right and raises his right arm.  It works better than Jill and Chris' features and doesn't restrict movement. 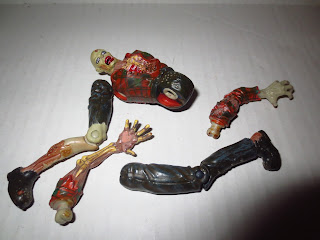 The zombie features hinged knees, swivel hips, swivel shoulders, and a swivel neck. His arms and legs are also removable.  It's a fun feature that works pretty well. Who doesn't love dismembering their toys? 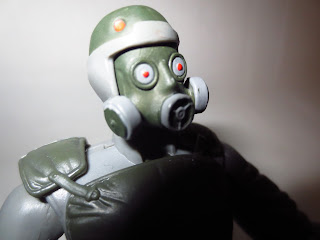 As I mentioned, Hunk shares quite a few parts with Chris Redfield from series 1.  The torso is covered by his armor, so that's no big deal, and the legs and boots are simple, plain tactical garb.  The left thigh is different than Chris', though, as Hunk has a pouch for ammo strapped to his wrist.  His armor looks more like a standard flak jacket than Leon's armor does, and it fits nicely since it's made of a softer material. It really does a fine job of replicating his look from the game.  The helmet and gas mask he wears, however, don't look as spot on.  The helmet looks like it's sitting too high and, rather than having the gas mask goggles, Hunk looks like he has the eyes of one of the Michael Bay Transformers.  The breathing aspects of the mask are good, such as the various filters and oxygen cylinders, but it looks slightly off. 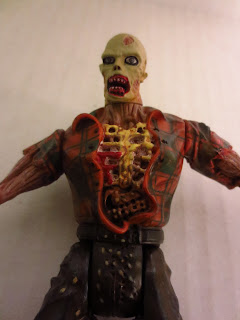 I also mentioned that the zombie was basically the lab zombie from the first series with a new head. How does he turn out? Actually, he's amazing. If someone asked you to draw the first zombie that comes to mind, I imagine most people would come up with this design. The sculpt is fantastic: he's corpsy looking with a ripped shirt, large portions of his innards are showing (check out the spine on his back), and his arms and legs are rapidly decaying. A big chunk of his skull is missing, revealing his brain. I'd love to have this figure in the 6-7 inch scale, as it is just a perfect sculpt of the purest idea of zombie.  There are even little maggots sculpted everywhere. Maggots! MAGGOTS!   Sorry, I'm not calling you maggots, dear readers, I'm just loudly proclaiming how much I love the fact that this toy is crawling with maggots. 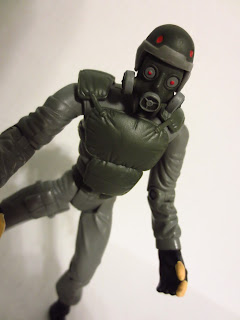 Hunk's pretty simple: light grey uniform, greenish gray armor and gear, black boots and gloves.  Throw on some red detail for his helmet and lenses, and he's ready to go with a neat, clean paint job.  I do wish Toy Biz had thrown a little Umbrella logo on him, though. 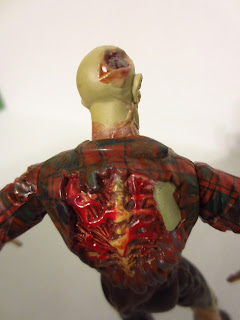 The zombie's paint job is marvelous, however. He has multiple different paint applications that really add a depth and creepiness to the figure.  His flesh is a putrid green, in places at least. He's got lots of missing flesh, including a completely exposed spine and ribs that are covered with blood that actually looks wet. Icky!  Each maggot is painted, the eyes and teeth are detailed exceptionally well, and the shirt is plaid in what might be a tribute to this guy from Dawn of the Dead. 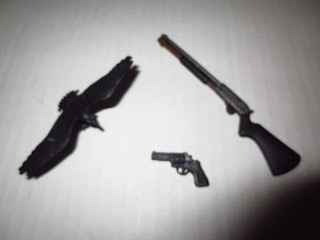 Hunk comes with two weapons: a shotgun and a revolver.  The revolver is actually reused from Chris Redfield in series 1, but it's never a bad thing to have an extra revolver around, is it?  It's black instead of a dark blue this time around. The shotgun may be intended to be the Remington M1 100-P Custom from the game.  It's a lovely accessory molded a glittery-gun-metal silver with black and brown paint apps.  Hunk can't really hold it normally with two hands, and it is a bit oversized, but it looks cool and would work great with larger figures as well. Do the zombie's arms and legs count as accessories? No? Ok, well then how about his crow? Yup, the zombie comes with a really cool little crow. It's got red eyes and everything. That's a neat extra to have sitting around, as I always had to use my old Playmobil crows. 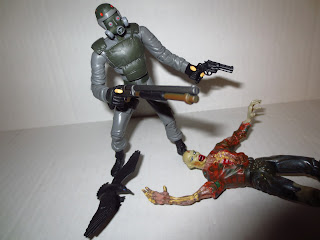 This easily may be one of the best sets in the Resident Evil line.  Heck, you could army build this set if you desired, since under that mask Hunk could be any generic Umbrella trooper you wanted him to be.  This set was a great idea, and the zombie in this set is easily one of the best zombie figures ever made.  My only problem with the set is that Hunk's mask is off, so I'm giving the set a Great and a 1/2. A cool paramilitary trooper and a perfect zombie figure in one pack: what kid wouldn't have bought that? I really wish Toy Biz had been able to keep this line going just a bit further, perhaps getting us the Nemesis and Jill from Resident Evil 3: Nemesis, or even some of the other S.T.A.R.S. members from the original Resident Evil : Barry Burton, Rebecca Chambers, and most importantly Albert Wesker. Why does nobody want to ever put Wesker in their lines? It's a crime, and NECA should have resolved it. Anyways, I'm ranting now, so I'll leave you to check out some more reviews during Resident Evil Week here at ThEpic Review.

Hungry for more Resident Evil reviews here at The Epic Review?  Then check out these other figures that have been  reviewed here: Chris Redfield and Cerberus, William G-3/ William G-4, Leon S. Kennedy & Licker,  William and Sherry Birkin, Claire Redfield and Zombie Cop, Jill Valentine & Web Spinner, and Mr.X/ Super Tyrant have all been reviewed from Toy Biz's Resident Evil line.  We've also looked at Chris Redfield from Marvel Vs. Capcom 3's Minimates.  Big Bad Toy Store has lots of Resident Evil toys in stock, both new, old, and available for preorders, so head over there to satisfy your cravings!