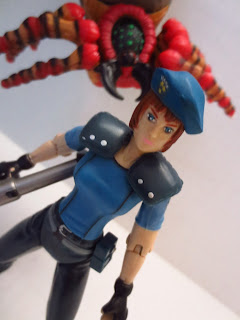 Ready for a review of the master of unlocking?  Then it's time to take a look at Jill Valentine, another figure from Toy Biz's Resident Evil action figure series from 1998.  Jill Valentine, one of the protagonists from the first game in the series, comes with a nemesis for her to fight: Web Spinner. It's one of the creepy, over-sized spiders running around the Spencer Mansion.  While I managed to pick this figure up with a lot of various toys a few years back, it didn't have Web Spinner or Jill's weapon with it. Finally I managed to get a complete figure not too long ago, so I'm rearing to go on reviewing this girl.  If you're ready to dive right in, so am I. Grab yourself a Jill Sandwich and get ready for the review, after the break... 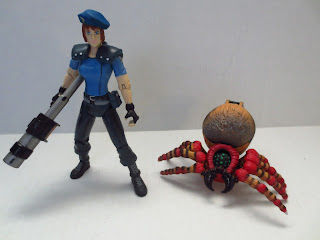 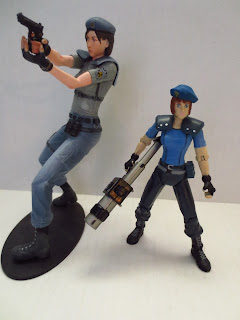 Jill stands just a little under 5 inches (although her beret adds a little height), which puts her in scale with the rest of the human figures in the line. She has a very animated, almost anime influenced appearance to her that seems to mirror the art from the game's instruction manual as well as her appearance in Marvel Vs. Capcom 3.  Web Spinner (which is more of a title than the actual name of this particular spider--her actual name is pronounced through a series of mandible taps) is about 3 1/2 inches long, 4 inches wide, and 2 1/4 inches tall. 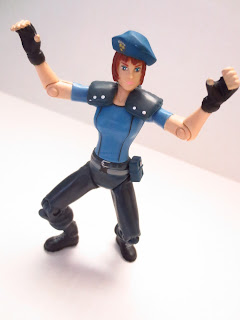 Jill is fairly well articulated for a 5 inch figure from the late 90's. She has: hinged ankles, hinged knees, swivel hips, a swivel waist, ball jointed shoulders, hinged elbows, and a swivel neck.  She can stand straight, take a few different poses, and kill zombies. She has the "authentic video game" action of looking to her left and raising her left arm a few centimeters, also. It works, but barely. There's just not much movement there, but fortunately it doesn't hinder articulation. 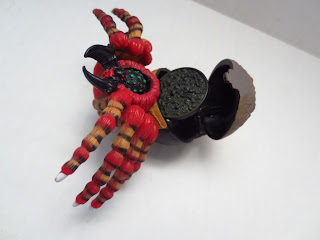 Web Spinner doesn't really have any articulation, as her legs and mandibles are solid. She does have an action feature, where when you press on her head her body pops open and a catapult inside launches two strands of little spiders. This definitely mimics what happens when you kill the spiders you first encounter in the guest house in Resident Evil, but the feature doesn't really work that well. It's novel, but suffers from poor design. 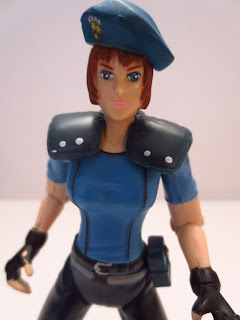 While the creatures in the first series of Resident Evil had strong sculpts, Jill is a bit weak. It's not bad, but the face and beret are slightly awkward. I thing the beret really hampers things because it seems really large and always puts me in the mind of Monica Lewinsky. Plus, Jill's all decked out in blue. Anyways, there are a few good details such as the ammo pouch on her belt, the seams on her shirt, and the laces on her boots. 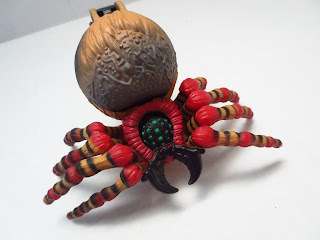 Web Spinner really excels, though, with a strong spider sculpt. While she's not as cool as Shelob from Toy Biz's Lord of the Ring line (granted, that didn't come out until 2004 or 2005), she's still a pretty sweet spider sculpt.  The texture makes her legs look furry, and there are lots of beady eyes on her head.  Inside her bulbous body, the catapult that launches the little spiders is even detailed to look like--something. A spider womb? No idea. It's just creepy and awesome. 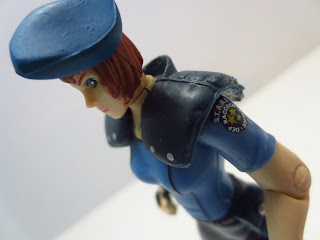 Jill's shirt and pants are nicely done. There's a light wash on her pants to add extra detail. Her beret also has a variant of the "S.T.A.R.S." logo on it with three little stars. She's got some buttons on her shoulder pads, but they're different sizes. What aggravates me is that her skin tones don't match. Her arms are a different tone than her face, and the arms are a bit messy looking. So are her gloves, as mine have her flesh colored paint in random places on the glove, not just on the fingertips. Web Spinner is much nicer with a really attractive mix of reds and browns and just a hing of green. It's colorful enough to stand out, but not silly colorful. Kind of like many poisonous creatures that stand out to let you know they'll whip your crap if you as much as look at them. 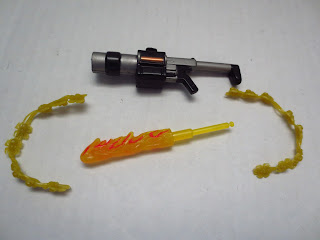 Jill unfortunately only comes with two accessories: her grenade launcher and a projectile.  It looks fairly close to the grenade launcher in Resident Evil and fires a flaming missile. As I said in the Chris review, wouldn't it make more sense for Chris's flamethrower to have fired the flame and Jill's grenade launcher to have come with a solid projectile?  Anyways, Jill can hold it fairly well, although it is a bit over-sized.  It'd look more in scale with a 6 inch figure.  Web Spinner also comes with two accessories: two strands of baby spiders. They're both the same, but each strand is composed of eight baby spiders on a strand of webbing. They're molded in a rubbery, yellowish plastic and can either fit inside of Web Spinner or can be draped over another figure. Don't eat them! They're not candy, although they kind of look like it.  You could also tape a strand of them to your face to reenact that old urban legend about baby spiders hatching from a lump on someone's face. I guess what I'm trying to say is that these are versatile. 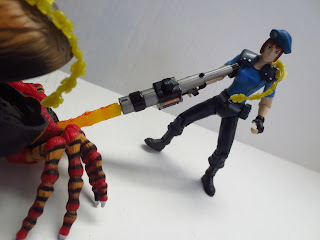 Since I didn't have this set as a kid, I don't have any fond memories of it to share. I love the way that Toy Biz tended to package two characters together, as that's just a great format to automatically introduce some type of conflict or story into a toy line. The articulation is serviceable, but the action features really don't work well.  Decent sculpting, somewhat disappointing paint on Jill, but some decent accessories leave me feeling this figure is good. If you're a huge Jill Valentine fan or are attempting to collect this line, you'd probably like to track it down. Otherwise, there are definitely better representations of Jill out there, both as statues, action figures, and 1/6th scale figures.

Hungry for more Resident Evil reviews here at The Epic Review?  I've also reviewed: Chris Redfield and Cerberus, William G-3/ William G-4, William and Sherry Birkin, Claire Redfield and Zombie Cop, and Mr.X/ Super Tyrant from Toy Biz's Resident Evil  figures. Also, check out Hoardax's guest review of Tarman from Return of the Living Dead.  Big Bad Toy Store has this figure in stock as well as a really cool Jill Valentine statue from Holly Wood Collectibles, and you can pick them both up here.